Writing for the New York Times, David W. Dunlap reveals how a harmless photo taken at Marilyn’s wedding to Joe DiMaggio in San Francisco, back in January 1954, cost the newspaper’s picture editor, John Randolph, his job.

“Gay Talese told the unhappy story (with a happy ending) in ‘The Kingdom and the Power, his 1969 account of our inner workings. It concerned the picture editor John Randolph and the marriage on Jan. 14, 1954, of Marilyn Monroe and Joe DiMaggio.

‘Randolph routinely picked one picture from out of the pile [of wire-service photos], marked it for a two-column cut and put it aside to be submitted later to the bullpen, which passes on all photographs before they are sent up to the engraving department. The picture showed Marilyn Monroe with her head back and her mouth slightly open, and DiMaggio with his lips puckered and his eyes closed. There seemed nothing particularly vulgar or exceptional about the picture — at least Randolph did not think so, nor did Theodore Bernstein and the other bullpen editors who later passed on it.’

The next morning, John Randolph was no less surprised than dozens of other Timesmen to hear that the picture in the Times had caused a “great flap” in the publisher’s office, and that Randolph was no longer the Times’s picture editor. Randolph at first could not believe it. He could not believe, nor could other Timesmen, that Miss Monroe’s open-mouth French kiss would so offend the sensitivities of Arthur Hays Sulzberger, or Iphigene Sulzberger, or whoever may have registered an objection in the publisher’s office.

‘Neither embittered nor angered, Randolph accepted the embarrassed assurance of the managing editor, Turner Catledge, that his pay would not be cut as he was moved over to the national copy desk.

‘Two years later came the happy ending: The “Wood, Field and Stream” columnist — whose beat was the great outdoors — was leaving The Times. Catledge offered the job to Randolph, who turned out to be the ideal writer for the assignment.'” 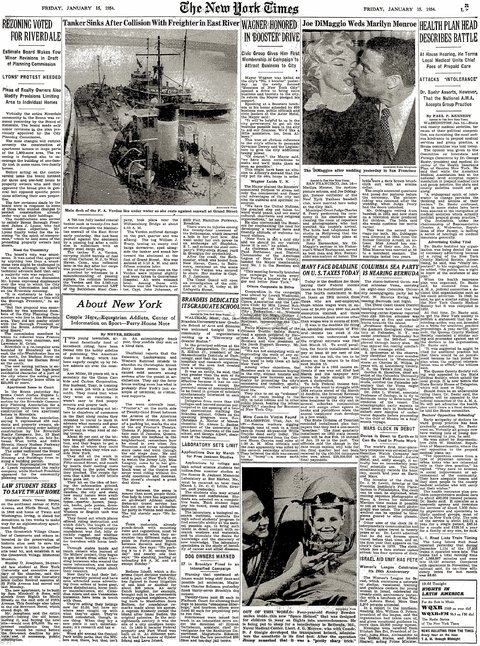