Elliott Erwitt’s Kolor is a new, and very large book of colour shots spanning the photographer’s long career, including previously unseen pictures from The Seven Year Itch and The Misfits. 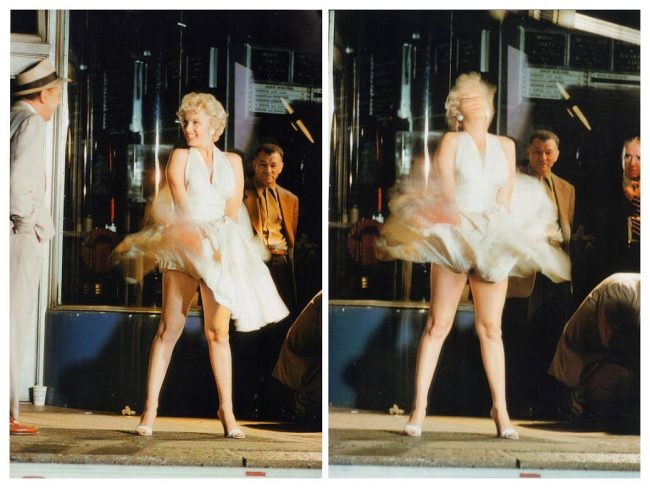 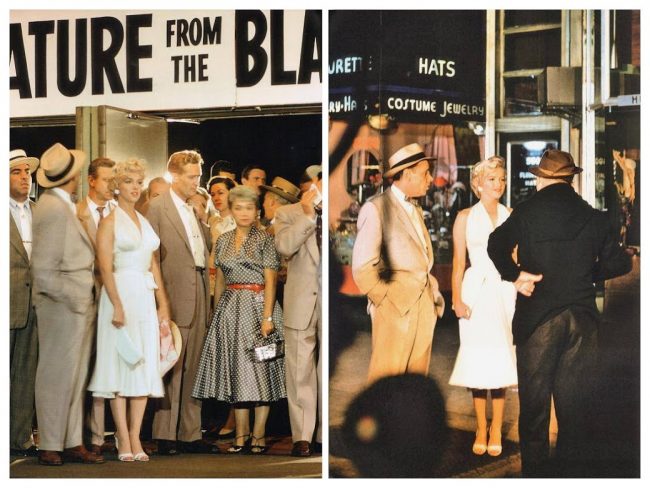 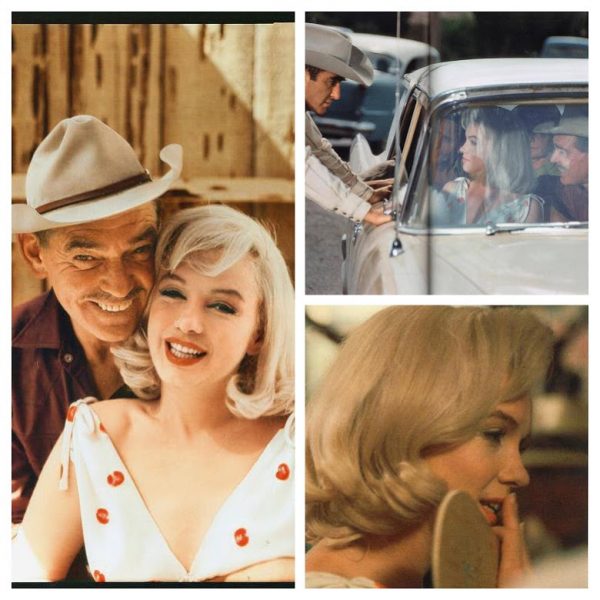 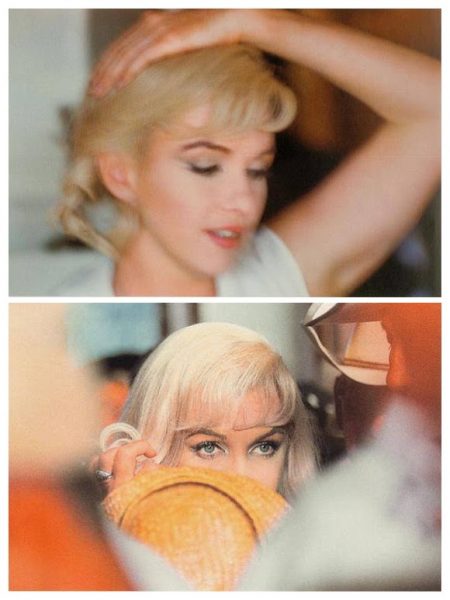 Nonetheless, this is the third time that Marilyn has featured on an Erwitt book cover…

“Kolor is a subtle tribute to George Eastman (who liked words with the letter K because he thought people remembered them better) and his photography empire, Kodak. To select the color photographs for this vast project that have never been published in a book before, Elliott Erwitt sifted through his nearly forgotten ample archive of nearly half a million 35mm—primarily Kodachrome—film slides. Then he began the mammoth task of whittling it down to this epic collection of roughly 450 pages.

For most of these images, the color managed to stay miraculously preserved and every evocative detail is as crisp as the date they were developed, many nearly sixty years ago.

Whether world leaders or sassy showgirls, the subjects reflect Erwitt’s own wry and eclectic sensibility. To say the juxtapositions are intriguing would be an understatement. From marketplaces to military camps, Vegas to Venice, there’s a rich mixture of public pageantry and carefully observed private interactions.” 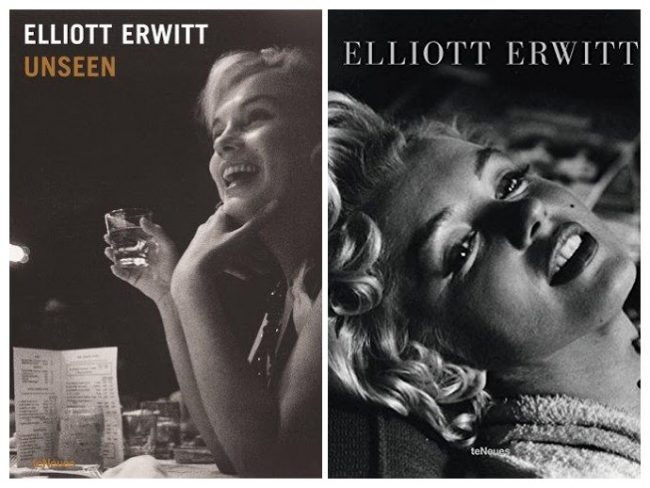 Over at Remind magazine’s blog today is a feature about the USO, who have brought entertainment to US troops since 1941.

“As it became clear that the United States was heading into World War 2, a number of service organizations mobilized in support of the military … To maximize the support provided by these groups, President Roosevelt asked Congress to enact the nonprofit United Service Organizations (USO). Roosevelt said he wanted ‘these private organizations to handle the on-leave recreation of the men in the armed forces.’

Although congressionally chartered, the USO is not a government agency and relies heavily on corporate and individual donors.

In 1950, an the U.S entered the Korean War, the USO was re-activated and new performers signed up for duty, including Danny Kaye, Debbie Reynolds and Marilyn Monroe. The USO stayed active afterward, providing services to faraway soldiers in peacetime as well as in the later conflicts in Vietnam, Kosovo, the Gulf War, Iraq and Afghanistan.”

But Toohey isn’t aiming for historical accuracy — we know how the story ends. For her,Becoming Marilyn Monroe is part endurance test, part wish fulfillment and part emotional journey ‘about life and death,’ which has been years in the making.

‘I was always interested with the idea of women in their rooms, in their personal space, particularly women in the public,’ Toohey tells the Weekly. ‘What is their life like in their bedrooms? How do they spend their days? I want to create an opportunity to look into the possibilities of her life and to see that, if this was our last day, what would that be like for us?’

A Buddhist, Toohey was conceived on a Vermont commune and raised in Maine. She didn’t watch Monroe’s movies as a kid, though as a teenager she had a poster of Monroe in her iconic subway-vent pose from The Seven Year Itch. (‘Then she was larger than life for me.’) But what really piqued her admiration for the blond bombshell was a photo in a book of Monroe standing next to French actress Simone Signoret, who was married to Monroe co-star (and rumored lover) Yves Montand.

‘I just looked at her and something in me said, That’s a woman,’  Toohey says. ‘That is what I’m meant to grow into.’

Before moving to L.A. with her husband, Toohey performed a small theater role inspired by Monroe. But, over coffee at a shop in Glendale, she explains that two crucial events two years ago pushed her into fully immersing herself in Marilyn’s world: her father’s death and a miscarriage.” 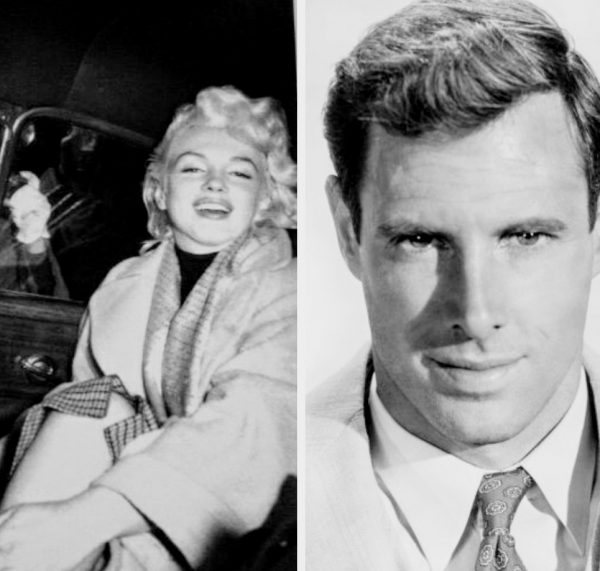 Bruce Dern is a veteran actor who, at 77, won the Best Actor award at Cannes this year for his role in Nebraska. He began his career in New York during the 1950s, as he recalled in an interview for Hitfix:

“Nearly half a century ago, Marilyn Monroe confided in a young Bruce Dern an opinion of the actor passed to her by Actors Studio founder Elia Kazan, or ‘Gadge’ as they all knew him. ‘He’s not going to be a leading man,’ the famed director said, ‘because he’ll be into his 60s before anyone knows what he’s capable of.'”

Dern’s screen debut was in Kazan’s Wild River (1960), starring Montgomery Clift. Marilyn was offered the female lead, but at Kazan’s insistence, the part was played instead by Lee Remick.

This year marks the centenary of Vivien Leigh’s birth. Leigh is perhaps best-known for her roles in Gone With the Wind and A Streetcar Named Desire – and offscreen, she became one half of England’s most celebrated theatrical couple when she married Sir Laurence Olivier.

In 1956, Olivier directed and starred with Marilyn Monroe in The Prince and the Showgirl (with MM in the role Leigh had played onstage.) While their mutual enmity is well-documented, Leigh’s private thoughts on Marilyn are less clear.

Like Monroe, Vivien was prone to depression (she suffered from Bipolar Disorder.) During the filming of Prince, Leigh became pregnant – but she subsequently lost her baby. Marilyn was also said to have miscarried at this time, but the rumour remains unconfirmed.

As reported in The Independent, Leigh’s personal archive has now been acquired by London’s Victoria and Albert Museum. The collection includes diaries, photos and letters from many famous names – including both Marilyn and Arthur Miller.

“The archive also contains more than 7,500 personal letters addressed to both Leigh and Olivier from the likes of TS Eliot, Arthur Miller, Sir Winston [Churchill], Marilyn Monroe and Queen Elizabeth, the Queen Mother who thanks the couple for remembering her.”

Actress Kim Stanley, who played Cherie in the original Broadway production of Bus Stop – and was dubbed ‘the female Brando’ – also starred in perhaps the first Marilyn-inspired movie, The Goddess (1958.)

The melodrama was written by Paddy Chayevsky, and some think his downbeat portrayal of an actress whose life is very similar to Marilyn’s was prompted by his failure to interest MM herself in a previous script. (Reportedly, Arthur Miller advised her to reject it. Curiously, Miller’s sister, Joan Copeland, would play a supporting role in The Goddess.)

Writing for Backstage, Matt Mazur – who has praised Marilyn’s acting in the past – argues that despite its negative associations, The Goddess was Kim Stanley’s finest screen performance.

“Stanley’s performance in The Goddess represents the archetypal Hollywood bleached blonde’s misguided dreams of being a star, instead winding up at the wrong end of the bottle, wasted on her own demons. Stanley neither condemns nor condones her character’s erratic behavior, despite screenwriter Paddy Chayefsky’s near-insistent judgments. Stanley never allows him to use Rita as a simple cautionary tale, and her shockingly complex, empathetic performance gives him no control over the character’s turbulent interior. Rita is owned by Kim Stanley, not by the man who wrote her, not by the film’s director, and certainly not by the audience. This brusque defiance of conventionality cements Stanley’s icon status—her Rita lives on as a genuine miracle of film acting.”

Marilyn: An Illustrated History is a new, hardback book by Sandra Forty, 256 pages long and published by Taj Books. Fraser Penney, friend of this blog, notes a few bloopers:

“Not sure how she managed to figure out Marilyn’s second husband was Arthur Miller and that he organized her funeral? There’s a few glaring mistakes including her being wrongly identified in a picture from the film Green Grass Of Wyoming. A few of the pictures are pixelated but the majority are nicely reproduced and there’s some I don’t think I have seen in a book before. If you can forgive the errors, it’s a lovely big book covering MM’s life and career with a nice selection of full page photos.”

Fraser has kindly shared some sample pages with us: 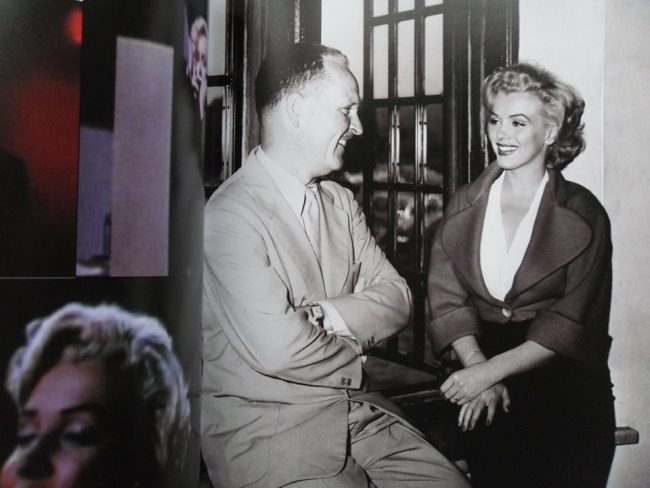 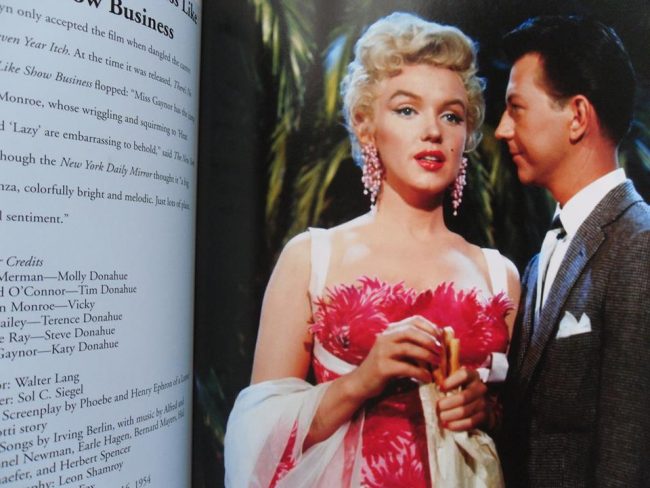 The book gets a 3 star rating from AimeeL, a customer on Amazon.com:

“The book is filled with dozens and dozens of photos which look like the author/editor simply found them online and printed them out… a very nice introduction for new Marilyn Monroe fans, but if you’re already a huge fan and have been for a while, you’ll find nothing new…”

An exhibition of Travilla’s costumes and personal effects opens tomorrow at the Newbridge Silverware Museum of Style Icons in County Kildare, Ireland, through to September 30th.

The exhibition is presented in association with Julien’s Auctions. It was previously announced that the exhibition was a preview for the Icons and Idols: Fashion sale, but please note: the auction date has now been moved to November 8th.

“The never before seen collection was bequeathed to the partner of the late designer when he passed in 1990, this exhibition is the first time it will be seen anywhere in the world. Some of the Marilyn Monroe highlights of the ‘Collection of William Travilla’ exhibition include a Monroe/Andy Warhol Blue Tribute Dress which was created for an Andy Warhol memorial service at the Beverly Hilton and mimics the famous Seven Year Itch dress, a Marilyn Monroe Gentlemen Prefer Blondes inspired gown by Travilla featuring the gold lame sunburst halter gown design, (a Gentlemen Prefer Brunettes Travilla sketch), Travilla’s There’s No Business Like Show Business Academy Award plaque. a 1953 Travilla Gentlemen Prefer Blondes costume sketch and a Marilyn Monroe Seven Year Itch inspired Travilla gown along with several other pieces.”

This photo of Marilyn and Arthur Miller, taken on May 8th, 1957, is among the famous images featured in ‘Richard Avedon People‘, opening tomorrow at the National Portrait Gallery in Canberra, Australia, through to November 24th, reports the Canberra Times, noting that Avedon ‘influenced a style of portraiture that is taken for granted nowadays – photographing his subjects in front of plain, white backgrounds, so as to draw out the individual’s personality.’

“Powerful brands have a creation story, and Marilyn’s tale of a beautiful abandoned child and rags to riches contains elements of Mark Twain’s Huckleberry Finn, a Horatio Alger tale, and Joseph Campbell’s mythic orphan rolled into one.

Like the Mona Lisa’s enigmatic smile, Marilyn Monroe is a mystery of parts. She meant sex in an era when sex was a four-letter word. She was also uniquely feminine, a Woman in an age of Men. She struggled, fought, and succeeded against the desires of men who tried to bully her.

Stories are rivers of meaning. Tugging at the string of narrative that runs from creation story to creed, icons, rites, lexicon, nonbelievers, and leader, is what keeps brands meaningful, alive, relevant and a resonant legacy for future generations. It’s what moves people along the path from, ‘Who cares?’ to ‘I care!’

Ever since her mysterious, legendary, hallowed death in 1962, Marilyn Monroe the controversial mortal has been embraced, promoted, propped up and immortalized by uniquely lesser talents who have basked in her halo, and as no small consequence have rolled up millions of dollars. Of the ten richest dead celebrities (which includes Einstein, Charles Schulz, and others), Marilyn Monroe is the only woman on the list. (Ironically, Marilyn herself once quipped, ‘I don’t look at myself as a commodity, but I’m sure a lot of people have.’)”