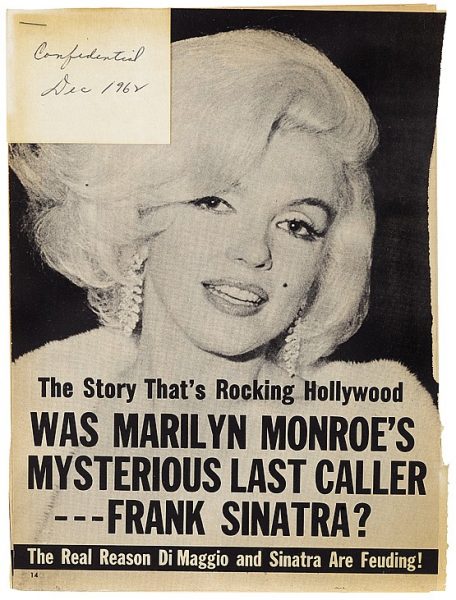 Over at Immortal Marilyn today, Leslie Kasperowicz asks if there is any truth to the rumours that Marilyn had affairs with women (such as her dramatic coach, Natasha Lytess), and why the facts still matter.

“There is zero evidence to support Marilyn having sexual relationships with women. Marilyn herself stated clearly that she was not a lesbian … Is it possible Marilyn at some point had a sexual encounter with a woman?  Sure.  Is there any real evidence of it?  No.

And the truth is that there is no evidence to show that any of the claims of affairs with women are true.”

‘The death of Marilyn Monroe has been greatly exaggerated,’ Eriq Gardner quips in an article for the Hollywood Reporter, detailing a new lawsuit filed by Marilyn’s estate, against merchandiser AVELA.

Interestingly, AVELA previously filed suit against the estate in June 2012, for interfering with its licensing activity. In a separate case that August, involving the Milton H. Greene Archives, it was ruled that MM’s persona belonged to the public, not the Monroe estate. The AVELA case is still ongoing, and this latest development is a counter-lawsuit.

“The Monroe Estate is now in court against AVELA, a company that specializes in nostalgia merchandise, and is asserting that goods featuring Monroe are a violation of trademarks. In a motion to dismiss, AVELA argued that the trademark claims are ‘a thinly veiled attempt to assert a right that does not exist — a right of publicity in Marilyn Monroe.’

In her opinion on Friday, U.S. District Judge Katherine Polk Failla spells out the difference between publicity rights and trademarks. ‘The key distinction between a right of publicity and a false endorsement claim is that the latter requires a showing of consumer confusion,’ she writes.

Shrugging off other objections including the implausibility of the Monroe Estate’s ownership and the viability of a false endorsement claim on behalf of a deceased celebrity, the judge allows the lawsuit to proceed.

This is good news for anyone in the ‘celebrity services’ business as it allows stars an additional statutory vehicle to pursue those who use their images. Some like Halle Berry and Sandra Bullock have already used both publicity rights and trademarks together as legal weapons in court.

Alternatively, those hoping that trademarks don’t become a way to skirt what’s fallen into the public domain, may have to square Judge Failla’s opinion that just because Monroe’s persona has been adjudicated to belong to everyone doesn’t mean her estate can’t bring a trademark action.

Of course, the Monroe Estate still has to win on the merits and this might not be clear cut. For instance, the opinion mentions a prior case where Fred Astaire’s widow sued over the ‘Fred and Adele Astaire Awards’ and failed because the plaintiff was unable to show ‘that consumers will be deceived into believing that the late Fred Astaire endorsed defendants’ awards.'”

Over at Marie-Claire today, a look at Marilyn’s top beauty secrets – as revealed by her make-up artist, Allan ‘Whitey’ Snyder.

Korea is sometimes described as a ‘forgotten war’, and the involvement of British troops has been overlooked. Joseph Scott, who was just eighteen when he joined the Cameron Highlanders in Korea, has shared his memories of the conflict – and the unforgettable day in 1954 when Marilyn Monroe visited his base – in an interview with Scotland’s Greenock Telegraph.

“Grandfather Joseph, 80, of Kilblain Court said: ‘I have been a huge fan ever since.’

‘She came on stage and she didn’t even have to sing. She just stood there and everyone was cheering. There were thousands of soldiers and nobody had seen a woman for years!’

‘I was friends with a couple of Americans and they got me in to see it. It was incredible. She was a beautiful woman but I don’t even think I knew who she was back then.’

Joseph’s wife Catherine, who he met after he left the army, has been happy to share her life with Marilyn. Over the years Joseph has collected a number of photographs of the icon.

Catherine, 77, said: ‘Joseph is her biggest fan. Our grandchildren have bought him lots of canvas prints of Marilyn and I let him put them up!’

Joseph was posted in Korea along with his regiment the Cameron Highlanders after signing up at 18.

He said: ‘There was nothing in Greenock for young people my age. It was a desperate place, so I decided to join the Army.’

During his spell in the forces he was also diverted from Korea to the Suez Canal crisis.”

One of the brightest new lights in the Marilyn blogosphere is April VeVea, who scrutinises vintage news coverage and more recent biographies to reveal the truth behind the many myths surrounding even the most accepted accounts of events in Marilyn’s life (and of course, her death) on her personal website, ‘Unravelling the Slander of Marilyn Monroe.’ April is also a valued contributor to the internet radio show, Goodnight Marilyn. In her latest blog post, she takes a closer look at Marilyn’s relationship with Joe DiMaggio, from their fateful first meeting to the rumoured reconciliation just before Marilyn died.

In anticipation of Arthur Miller’s centenary next month, the Pequot Library in Southport, Connecticut – close to where the playwright lived during his marriage to Marilyn, and until his death in 2005 – is currently hosting ‘Arthur Miller’s Focus‘, a display of books published by, or about Miller, in their Rare Book Case at the Reading Room, running through to October 8, reports the Fairfield Sun. 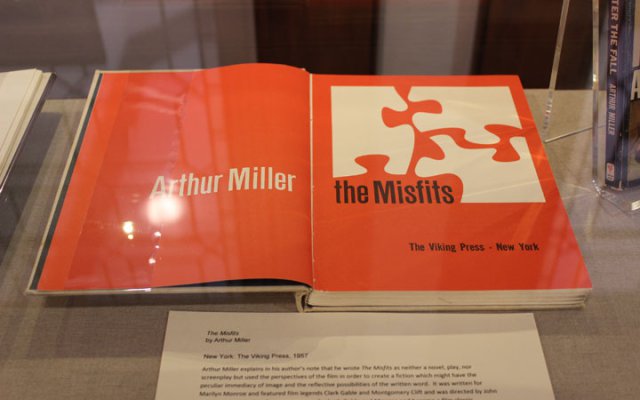 Norman Farberow, the psychologist who contributed to the official report (or ‘psychological autopsy’) on Marilyn’s untimely death, has died aged 97, the Telegraph reports. With colleague Dr Robert Litman, who also participated in the inquiry, Farberow founded the pioneering Los Angeles Suicide Prevention Centre. Ironically, he passed away on September 10 – which also marked World Suicide Prevention Day.

“Marilyn Monroe’s fatal drugs overdose in 1962 had shone a very public light on the issue of ‘unpredicted death’. Farberow was at the head of a team of psychiatrists tasked with producing an ‘autopsy’ on the actress’s likely state of mind. By questioning those in contact with her in her final weeks, Farberow learnt that she had made previous attempts on her own life and had struggled with fluctuations in her mood. The team’s report recommended a verdict of suicide.”

On September 15, 1954 – 61 years ago – Marilyn filmed the ‘subway scene’ from The Seven Year Itch on the streets of New York. This anniversary is noted by several media outlets today, although most focus on the iconic photos taken on location and its allegedly disastrous impact on Marilyn’s marriage to Joe DiMaggio than its place in the movie. Most of the footage was unusable, due to the noise of the crowd who had gathered to watch. The scene would later be re-shot in Hollywood, and is surprisingly tame. Nonetheless, The Seven Year Itch became one of Marilyn’s most popular films, and the original shoot remains one of the great publicity stunts of all time.

Over at the Silver Screenings blog today, a perceptive review of How to Marry a Millionaire – as part of the ongoing Lauren Bacall blogathon.

“We’re aware this film has been accused of being a shallow, spare-no-expense fashion show. So what? It was one of the first feature films made in CinemaScope, which was crucial in showcasing William Travilla‘s stunning wardrobe design.

How to Marry a Millionaire has a witty script, charming characters and first-rate comedic performances by Grable and Monroe. But our favourite character is the tough-talking Bacall…

Bacall is smart, skeptical and has learned how to sniff out a rat. For example, when Monroe announces her boyfriend is taking her Atlantic City on a Saturday to meet his mother, Bacall is immediately suspicious.

Bacall: ‘I think we oughta put a check on that one.’
Monroe: ‘Why? I don’t know what you mean.’
Bacall: ‘Nobody’s mother lives in Atlantic City on Saturday.'”