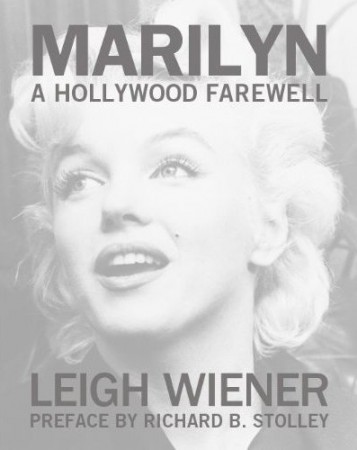 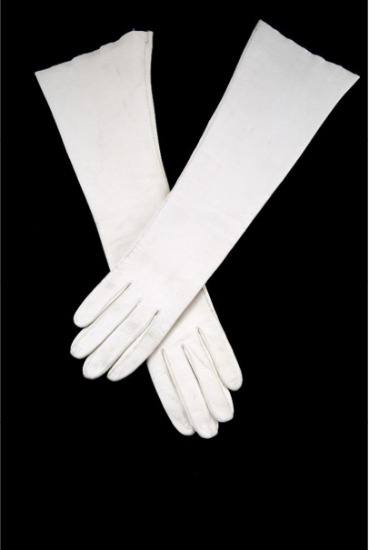 The Smithsonian Museum of American National History seems like the logical place for a permanent display about Marilyn, one of the most famous American women of all time.

Unfortunately, the museum currently holds just one item of Marilyn’s property – a pair of white gloves. Curator Dwight Bowers hopes to acquire more for a forthcoming exhibit on popular culture, according to AFP.

Let’s hope more private collectors decide to donate and share their treasures with the public. In the meantime, ‘MM: The Exhibit’ (featuring the collections of Greg Schreiner and Scott Fortner) is on display at the Hollywood Museum until September 2.

“Donated by a private collector, the gloves make up the entire Marilyn Monroe collection at the publicly-funded Smithsonian Institution, the world’s largest network of museums and, in principle, repository of all things Americana.

Bowers, who plans to include the gloves in an forthcoming Smithsonian exhibition on American popular culture, said it’s ‘logical’ for the museum to hold more Monroe memorabilia.

‘But Hollywood material and Hollywood celebrities are big business in the auction world,’ he told AFP in the windowless storeroom that’s packed floor to ceiling with show-business artifacts from vaudeville to today.

‘A lot of these high-profile pieces, when they come up for auction, are going to the Asian countries,’ Los Angeles collector Scott Fortner, whose own Monroe objects are part of the Hollywood Museum exhibition, told AFP.

‘I find it disappointing that some of these pieces literally just disappear and we have no idea where they go,’ added Fortner, who has catalogued his entire collection — from a feather boa to make-up and eye drops — online.” 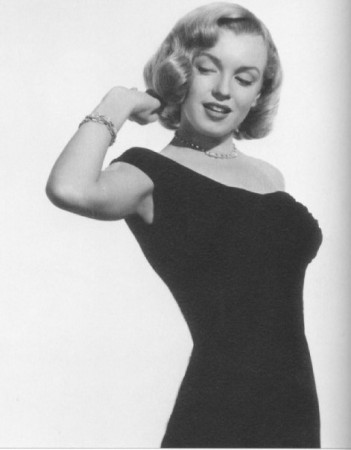 Some Like it Hot will be screened on Sunday, August 5 at 7.30 pm at The Dukes on Moor Lane, in my old university town of Lancaster. I spent many a happy hour there during my student days in the early 1990s!

Tonight at 8pm (GMT) on BBC Radio 4, Maureen Dowd will present a programme about Marilyn, The Smart Dumb Blonde. As a taster, you can also listen to a recent discussion of MM on Woman’s Hour, featuring Dr Lois Banner and Dame Ann Leslie.

“Pulitzer prize winning journalist Maureen Dowd argues that the so-called ‘dumb blonde’ of 1950s Hollywood was in fact smarter than she seemed. Marilyn Monroe and her ilk aspired to be brilliant in conversation as well as on camera; they wanted to pose with books as well as blonde hair; they understood the value of their sexual currency and they had enough sense to take advantage of their assets.

In this programme, Maureen Dowd brings together some of her most eminent friends and colleagues (amongst them, Harvey Weinstein and Mike Nichols) to travel back to a time when glamour and brains were not mutually exclusive. With the help of archive, film and music and some brilliant personal anecdotes, they’ll debate why the figureheads of the 50s believed in education as a mark of status and success.

Jump forward to today and American popular culture and politics has lost the drive which Marilyn’s era possessed. Maureen Dowd argues that aspirations and originality are no longer valued; instead we live in a cookie-cutter world of reality tv, banal cinema and inane politicians. And, despite the seeming triumph of feminism, some of the world’s most powerful and desirable women – from Sarah Palin to Kim Kardashian – are leading this trend. In the words of John Hamm, ‘stupidity is certainly celebrated’.”

“Hippie chicks and their flower power came and went, and the sunken cheeks of heroin chic had their moment, but a half-century later it’s Monroe’s recipe for reinvention — since followed by the likes of Madonna, Anna Nicole Smith, Christina Aguilera, Lindsay Lohan, Lady Gaga and others — that perseveres.

That resonance is one reason why the stiletto-clad footfalls of Marilyn Monroe seem to be growing ever louder. One can hardly swing a white mink wrap without hitting a Marilyn-branded product or project, such as a CGI appearance in a Dior fragrance ad with Charlize Theron or her estate’s @MarilynMonroe Twitter feed, which has more than 52,000 followers.

There are other factors feeding the current Marilyn frenzy, of course, including the 50th anniversary of her death, by barbiturate overdose, on Aug. 5, 1962, and the current trend toward anything that smacks of retro-nostalgia (i.e. the Mad Men effect). But the fascination has been on the upswing longer than that, says Lois Banner, an author and USC history professor whose second book about the late actress, Marilyn Monroe: The Passion and the Paradox, was published earlier this month.

‘There started to be articles about the ongoing fascination with Marilyn Monroe as far back as the mid-’70s,’ says Banner, ‘after Norman Mailer published his biography. But … it’s really increased in the last 12 years.'”

Marilyn Monroe: Collector, the latest compilation of Marilyn’s modest but stellar musical repertoire, is now available on CD or for download. Ludovic Hunter-Tilney reviews it in today’s Financial Times.

“Collector marks the 50th anniversary of Marilyn Monroe’s death with a straightforward compilation of her songs, from the sultry big band jazz of ‘Diamonds Are a Girl’s Best Friend’ to her sweetly wistful torch-gospel routine on 1954’s ‘River of No Return.’

The best aspect of her vocals, as with her acting, was comic timing: ‘My Heart Belongs to Daddy’ is a swinging, playful take on the relationship between the sexes – which in real life of course she found tragically oppressive.”

Maria Popova has posted a selection of Marilyn’s poetry (as published in Fragments) on the Brain Pickings site.

Siren’s Heart, a play about Marilyn starring Louisa Bradshaw, and previously staged in New York last year, will be revived at the Actors’ Temple Theatre on West 47th St, from August 5th for an open run, reports TheatreMania.