On August 6, 1955 – almost 61 years ago – Marilyn visited Bryant Cottage in Bement, Illinois, where her idol, Abraham Lincoln, had stayed while debating slavery with Senator Stephen Douglas in 1858.  The anniversary of her visit will soon be commemorated, according to Illinois.gov:

“Bement will celebrate the 60th anniversary of Monroe’s visit with a photo exhibit and a display of Marilyn memorabilia.

The free photo exhibit at Bryant Cottage State Historic Site runs Aug. 6-9.
On Aug. 8, the owners of the home where Monroe stayed during her visit will open the house for tours and display their extensive memorabilia from 10 a.m. to 3 p.m. The home is at 101 E. Wing Street, and the memorabilia display will be at Salon 101, located at 101 N. Macon Street.
Monroe, a Lincoln fan, visited Bement on Aug. 7, 1955, for the town’s centennial. Thousands of people turned out to watch as she shook hands, visited a nursing home and judged a beard contest. She also visited Bryant Cottage and gave a short speech about Lincoln.”

Meanwhile, the Peoria Journal-Star shares some details of how Marilyn’s visit was received in Bement:

“It’s the movie that hasn’t been made yet and Peorian Jack Mertes has the story for the screenplay.

It was 60 years ago when Marilyn Monroe visited Bement, a small town located between Champaign and Decatur.

It was a media moment — Marilyn, fresh from The Seven Year Itch, was at the height of her powers and the classic set-up: when big-time celebrity visits small-town America.

Mertes wrote about the visit in 1985 at the time of the 30th anniversary. He visited the town and interviewed some of the people who helped organize the star’s visit. He spoke with townspeople who remembered that day.

‘There were people everywhere…I don’t think Bement has ever had so many people in it,’ said Jessie Morgan of Monticello. ‘The Lord sure gave her looks,’ said Selby Clark.

Mertes also captures some of the press coverage of the visit. The Monroe appearance in Bement which made the cover of Life magazine, drew plenty of comments. [Actually, it didn’t make the cover of Life, though an article was published with photos by Eve Arnold, who accompanied Marilyn on the trip. She devoted a whole chapter to Bement in her 1987 book, Marilyn Monroe: An Appreciation.]

The Decatur paper referred to her as an ‘atomic blonde’ while William Groninger of the Champaign-Urbana Courier noted, ‘It’s pretty difficult to assess the exact welcome the luscious blonde was given, but even without a decibel meter we will agree to hysterical.’

Let’s not forget the Bement Register that described Monroe as ‘the movie actress who made walking more than a means of locomotion.'”

Marilyn makes the cover of Vanity Fair‘s August issue (French edition only.) If the photo looks familiar, that’s because it was previously used on Vanity Fair‘s US edition, back in October 2008. 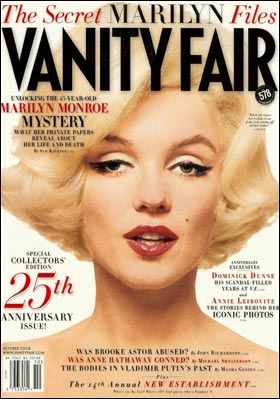 And by comparison with Bert Stern’s original photo, you can tell that poor Marilyn has fallen victim to the digital airbrush! 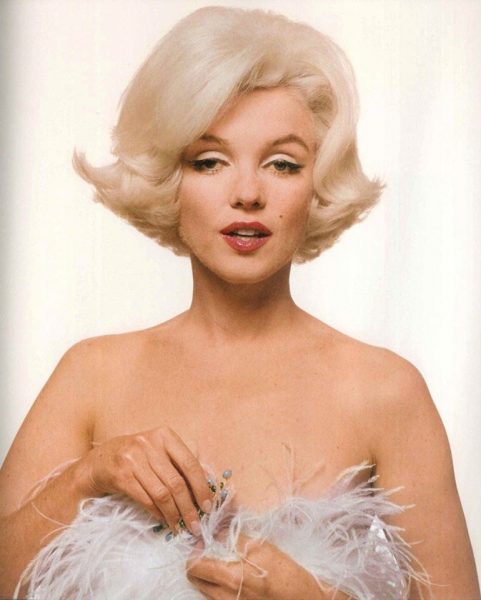 Some fans have suggested that another, more flattering Stern photo could have been used… 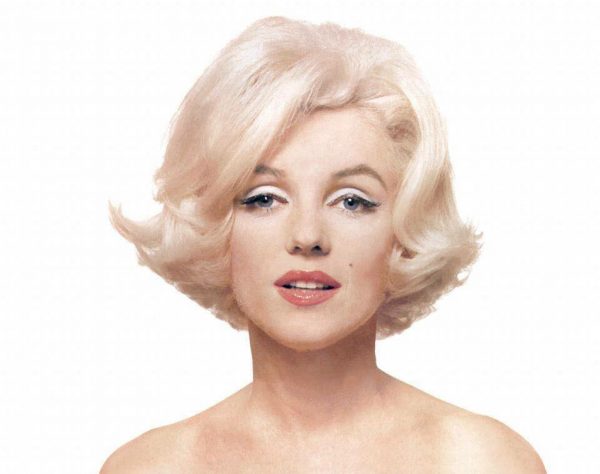 The magazine includes an article about Lawrence Schiller’s photos of Marilyn, filming the poolside scene in Something’s Got to Give. As some readers may recall, an extract from Schiller’s book, Marilyn & Me, was published in the US edition of Vanity Fair in June 2012. The French article, however, is written by MM superfan Sebastien Cauchon.

Which begs the question – why wasn’t a Schiller photo used on the cover? Many fans were asking the same question in 2012, when an Andre de Dienes photo was used on the US cover of Vanity Fair, and not Schiller. 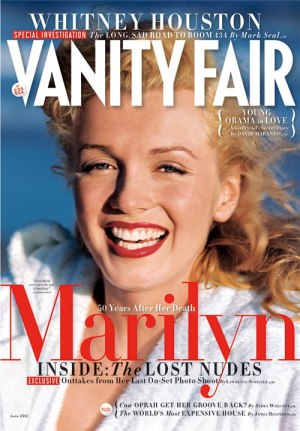 The answer, according to Sebastien Cauchon, is that Schiller’s poolside nudes don’t include a full-face, colour shot of Marilyn making eye contact with the camera. Marilyn & Me‘s original cover (later rejected) showed a pensive, full-face shot of MM in a fur hat, on the set of Something’s Got to Give – but not a nude. Presumably Vanity Fair‘s editors felt that a cheerful beach shot from De Dienes – though taken 13 years previously – was more in keeping with the summery, au naturel theme. 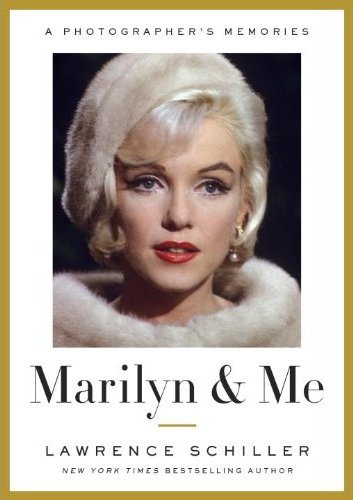 And as Sebastien Cauchon explained to members of Immortal Marilyn’s Facebook group this weekend, his article differs from the 2012 extract because its main subject is the proposed Playboy cover shoot Marilyn was considering at the time of her death (though according to Schiller, she was having second thoughts about the project.)

The article includes Hugh Hefner’s letter to Schiller and fellow photographer Bill Woodfield, explaining the concept of the mooted cover – click on the photo below to read in full. 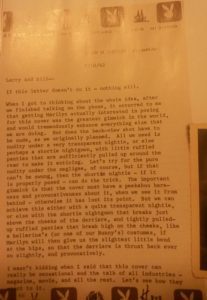 The photo shoot went ahead with model Sheralee Connors taking Marilyn’s place, and was featured in Playboy‘s 1962 Christmas issue. 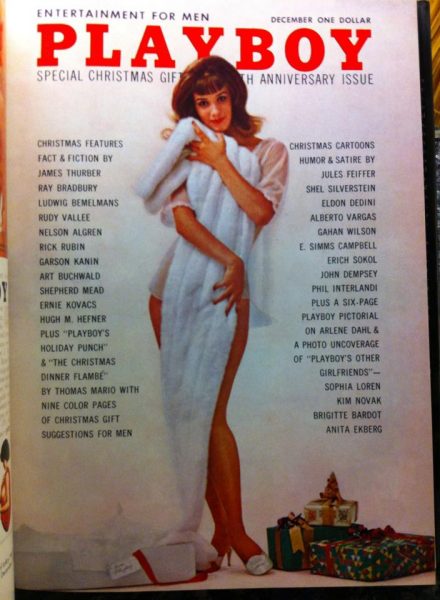 Don’t Bother to Knock (1952) is featured on a list of the ‘best hotel films’, compiled by HotelierMiddleEast.com. Other selections from classic Hollywood include Grand Hotel, Key Largo, The Bellboy and Psycho. 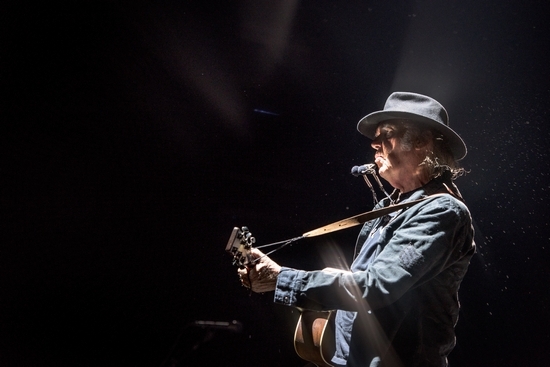 Many musicians have paid tribute to Marilyn over the years, and legendary folk-rocker Neil Young is no exception. ThePhotoNews.com reports that in a recent appearance at Bethel Woods – site of Woodstock – Young performed an old favourite, ‘From Hank to Hendrix’, from his 1992 album, Harvest Moon. His lyrics reference both MM and another iconic blonde, Madonna. You can listen to it here.

The upcoming 53rd anniversary of Marilyn’s death will be marked by a month of Tuesday matinees, hosted by Marion Council and Sippican Historical Society in Marion, Massachusetts, reports Sippican Village Soup – with Gentlemen Prefer Blondes on August 4th, The Seven Year Itch on the 11th, The Misfits on the 18th, and Some Like it Hot on the 25th.

“The Best of Marilyn matinees will be held in the front room of the Music Hall, 164 Front St., and offered free of charge to the public. Parking is available across the street at Island Wharf. Films begin at 11 a.m., and attendees are encouraged to bring a brown bag lunch to enjoy during the presentation. For more information, contact the Sippican Historical Society at 508-748-1116.”

“It’s pretty amazing that in 1988, the original owners of the property–Howard Hamamoto, Pundy Yokouchi and Takeshi Sekiguchi–travelled to Taliesin West in Scottsdale, Arizona. There, at the Frank Lloyd Wright Foundation headquarters, they reviewed architectural plans for a new golf clubhouse they wanted to build. Wright had passed away almost 30 years prior, but the plans they chose (originally called ‘Crownfield’) were created for a couple’s home in Fort Worth, Texas in 1949. The plans were never built, and were later altered for a Mexican official named Raul Bailleres in 1952 for a home in Acapulco Bay. But he also abandoned those plans to build.

When Marilyn Monroe and her then-husband Arthur Miller approached Wright about a home in 1957, he pulled the plans out again, customized them for land in Connecticut, and renamed it the ‘Marilyn Monroe Home.'”

Russo goes on to state that the house was never built because the Millers separated a year later. Actually, their marriage lasted until 1960. The real reason that the plans were abandoned was due to escalating costs, as Arthur Miller revealed in his memoir, Timebends.

“We had begun a year or so earlier by merely fixing up the worst faults in the old house, with the idea of building a new one on a crest of woodland within sight of it. [Marilyn] had contacted Frank Lloyd Wright to come up with a plan. Her impulse was royal, in part a kind of gift to me of a unique home. Thus it had to seem like ingratitude to question whether we could ever begin to finance a Wright design, since much like her, he had little interest in costs. I could only give him his day and let her judge whether it was beyond our means or not.

Wright, then near ninety, curled up in the back seat of the car when we picked him up in Manhattan one gray fall morning, sleeping soundly the full two hours it took to get to Roxbury. He was tall and theatrically handsome … we expected to live fairly simply and were not looking for some elaborate house to impress the world. I saw that this news had not the slightest interest for him …

When I went to his office in the Plaza Hotel and saw his design, I said it was far too elaborate for what we had in mind, more news that had no visible effect on him. Indeed, he proceeded to show me immense watercolor sketches for an entire new city he had designed …”

UPDATE: Sculptor Dale Zarrella, who created the bronze statues outside the Frank Lloyd-White designed golf club on Maui, has shared a personal anecdote about the building’s Marilyn connection in an interview with MauiNews.com…

“Marilyn Monroe and Arthur Miller actually went into my grandparents’ ice cream shop in Southington, Conn., when they looked for land to build this home right down the street from where I grew up. It’s an interesting fact.”

A series of illustrations by comic-book artist Joe Phillips, reimagining classic Hollywood stars as superheroes – including Marilyn as ‘Power Girl’ – is featured in the Wall Street Journal‘s Speakeasy blog this week. (Phillips has taken inspiration from a 1953 photo of Marilyn by Milton Greene…) 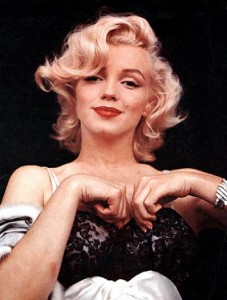 Meanwhile, Moviepilot.com has a showcased a series of posters for classic movies – including The Seven Year Itch – by Taiwanese artist Summerise, whose style recalls both Alphonse Mucha and Richard Amsel, who designed some of the most iconic movie posters of the 1970s and 80s.

“Marilyn Monroe appears out of a puff of smoke, her couture (in an echo to the famous scene where he skirts billows up) flowing like a wisp of desire complete with golden bird of sexual joy forming the dream stream.”

‘Becoming Marilyn’, an article about Norma Jeane’s early years and transformation, is featured in the August issue (#28) of UK magazine, All About History. The article is eight pages long and fully illustrated. 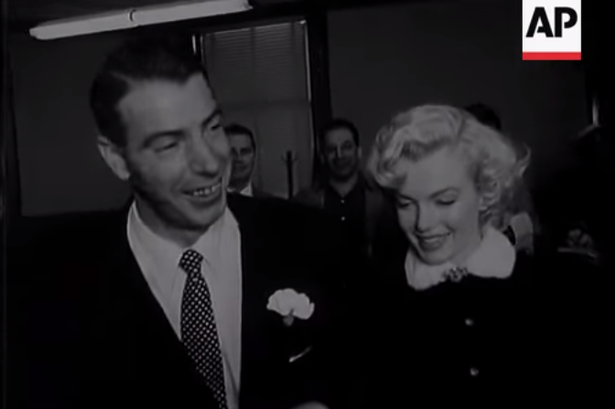 A photography exhibition last seen in New York, ‘Marilyn: The Making of a Legend’ will return to the Andrew Weiss Gallery in Los Angeles on July 25. BlouArtInfo.com has posted a slideshow of images by photographers including William Carroll, Andre de Dienes, Kashio Aoki, Milton Greene, Bert Stern and George Barris.

According to the Hollywood Reporter, the exhibition also includes rare photos taken by Gene Lester during filming of Gentlemen Prefer Blondes and There’s No Business Like Show Business.

As previously reported on ES Updates, those unable to attend the exhibition can order a catalogue – more details here.