As Marilyn’s birthday month draws to a close, here’s a look back at ‘The Burlesque of Marilyn Monroe‘, an insightful tribute from author and vaudeville historian Trav S.D.

“Monroe’s persona was an invention, an act of self-creation. From a poverty stricken, neglected background, she went on to transform herself into the ultimate symbol of luxury (‘Diamonds are a Girl’s Best Friend’).

Monroe was never in burlesque but as she began to develop her screen persona and gradually got more attention, burlesque comedy was the natural touchstone for her talents … Later comedies and musical comedies all riff on the idea of her either as the comically ‘dumb blonde’ and/or some degree of burlesque style glamour.

While she is usually cast as a wide-eyed innocent who was vulnerable and easily taken advantage of, on occasion, she went against type as a psycho or femme fatale … Most of her work as a print model gives off this quality as well, and I frankly find her far more beguiling and alluring in photographs than her film work … but even that could revert to burlesque.

And yet we all know, the story of Marilyn Monroe is ultimately a tragedy rather than a burlesque sketch. She spent all this time creating an artificial self, and then became trapped in a reality where people could only see that creation …” 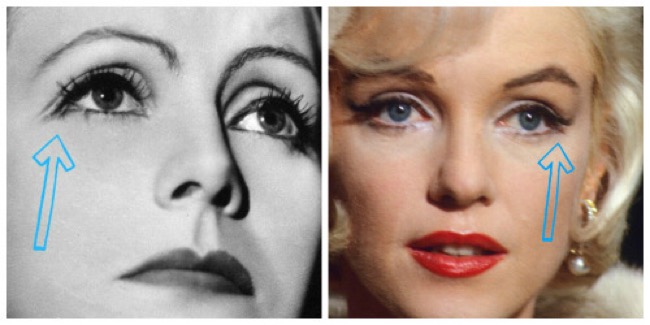 Over at the Watch More Movies blog, there’s an interesting post about Greta Garbo and her influence on Marilyn – with a special focus on their makeup styles. (Marilyn told one interviewer that she never missed a Garbo film on television, while Susan Strasberg mentioned Marilyn ‘doing her Garbo eyes’ for nights on the town.)

“Often when people talk about Marilyn Monroe’s predecessors, they can’t seem to get past her fluffy blonde hair. They draw endless parallels to Jean Harlow, with whom she shares little more than a hair color. Monroe herself idolized Garbo. And it shows if you’re looking for it.

All together, the lazy/sexy ideal is embodied by both women. Where Monroe usually infused this spirit into dizzy comedic roles, Garbo primarily put it to use playing women of mystery. Suffice it to say, both stars have reached an iconic status at least in part because their roles were intertwined so cleverly with their respective public images.

I look to Monroe’s eye makeup as the dead giveaway. Monroe and her makeup artist, Whitey Snyder, created much the same shapes but with gentler lines.

When Garbo first emerged with her long bob, it was admired by fans, but magazine writers were quick to point out that this was unflatteringly long and advised that only Garbo could pull it off. Likewise, Monroe was put down in the press for her too-long unstylish hair–some journalists even comparing her to a dog. (The ideal then being closer to Elizabeth Taylor’s neatly coiffed short curls.) Funny that both styles are considered almost universally flattering today.

According to Katharine Cornell, when Garbo was considering a return to the screen she wanted to star alongside Monroe. Garbo confided that she wanted to play Dorian Gray with Monroe as Sibyl Vane. If you’re queer-hearted like myself (and Garbo) it’s devastating that we never got that film.

I suppose I’ll sign off now with tears in my eyes for what could have been and for the mutual appreciation that Marilyn Monroe probably never knew about.” 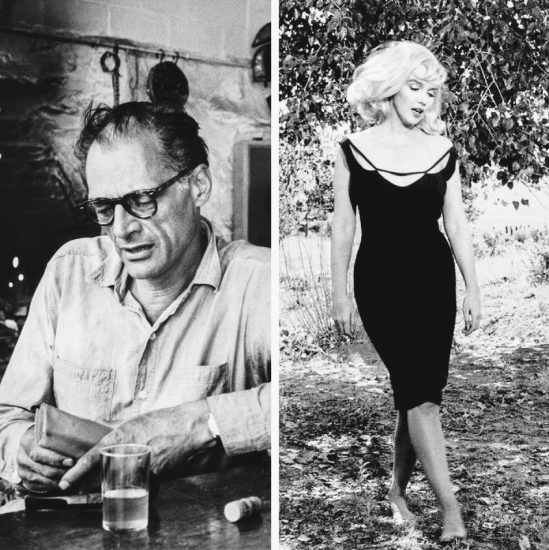 Inge Morath, the Austrian-born photographer who covered The Misfits for Magnum – and later became Arthur Miller’s third wife – is the subject of a retrospective opening today (ironically, the 62nd anniversary of Arthur’s prior wedding to MM) at the Maribor Art Gallery in Slovenia, through to October 21. 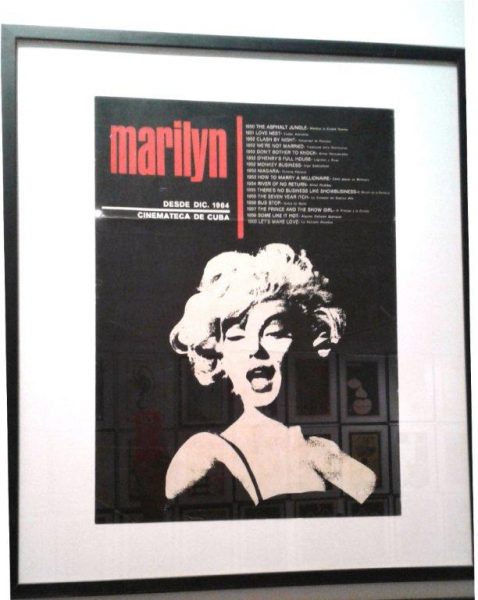 Memory in Pictures: Cuban Film Institute Posters 1960-2017, a new exhibition at the National Museum of Fine Arts until August 12, includes this poster for a 1970s retrospective of Marilyn’s movies, featuring a still from ‘My Heart Belongs to Daddy’, her big number from Let’s Make Love, the Havana Times reports. 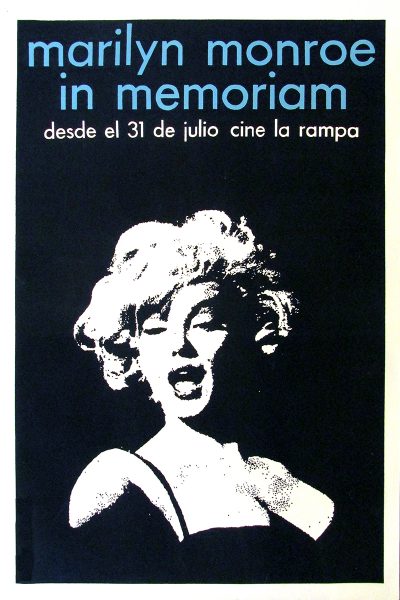 Among the cast of All About Eve (1950), three would die in tragic circumstances: Marilyn, George Sanders, and Barbara Bates, who appears as wannabe actress Phoebe in the final scene. Although her screen time was brief, it amounts to one of the greatest endings in Hollywood history. Interestingly, her part was reportedly considered for Marilyn before she was cast as Miss Caswell. Barbara also appeared in another early Monroe film, Let’s Make It Legal (1951).

Barbara was born in Denver on August 6, 1925, and came to Hollywood in her teens after winning a beauty contest. There she met Cecil Coan, a publicist for United Artists. They were married, and despite Barbara’s extreme shyness, she submitted to his designs to make her a star, appearing in such films as Johnny Belinda, June Bride and Cheaper By the Dozen. Like Marilyn, Barbara alternated between bit parts and posing for cheesecake, but her career didn’t take off as Marilyn’s did.

By the mid-1950s, Barbara’s emotional instability made her increasingly unreliable, and her last screen credit was in a 1962 episode of the British TV series, The Saint. After her husband was diagnosed with cancer, Barbara gave up acting to care for him, but the strain made her depression worse. A year after his death in 1967, Barbara was remarried to a childhood friend in Denver. But sadly this still wasn’t enough to turn her life around, and in early 1969, she was found dead by gas poisoning in a car inside  her mother’s garage. 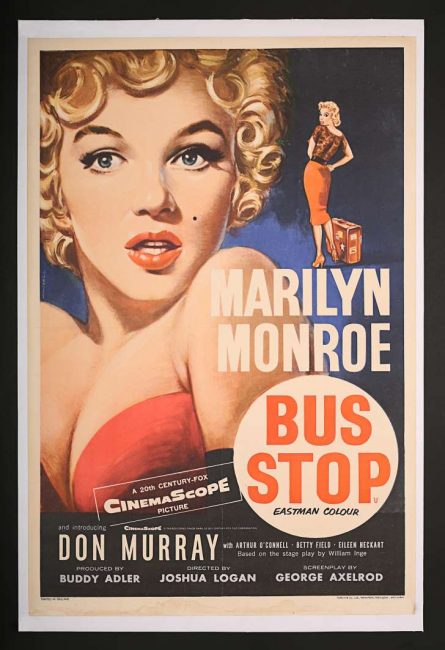 A selection of movie posters are on display at London’s BFI IMAX (which also hosts the UK’s biggest cinema screen) until tomorrow as part of an auction hosted by memorabilia seller Prop Store, Emily Petsko reports for Mental Floss. The collection includes a series of posters featuring Marilyn, designed by British illustrator Tom Chantrell, best known for his Star Wars posters (you can see more of his Marilyn artwork here.) 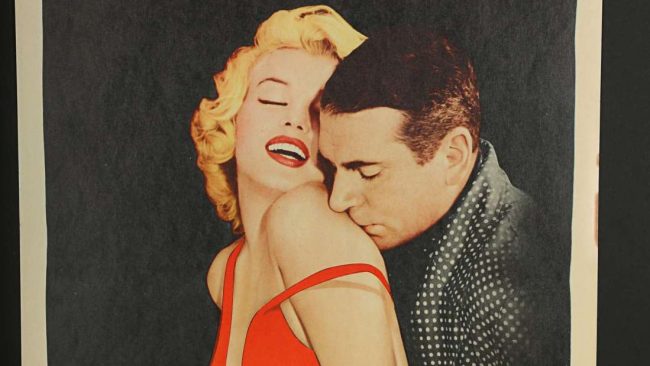 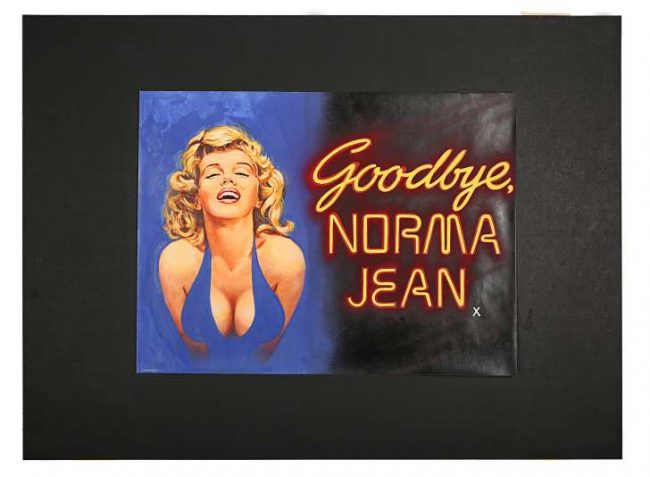 UPDATE: The winning bids fell somewhat short of expectations, with the Some Like It Hot poster selling for £750, and two posters for The Prince and the Showgirl reaching £200 and £500. The posters for Bus Stop and Goodbye, Norma Jean went unsold. 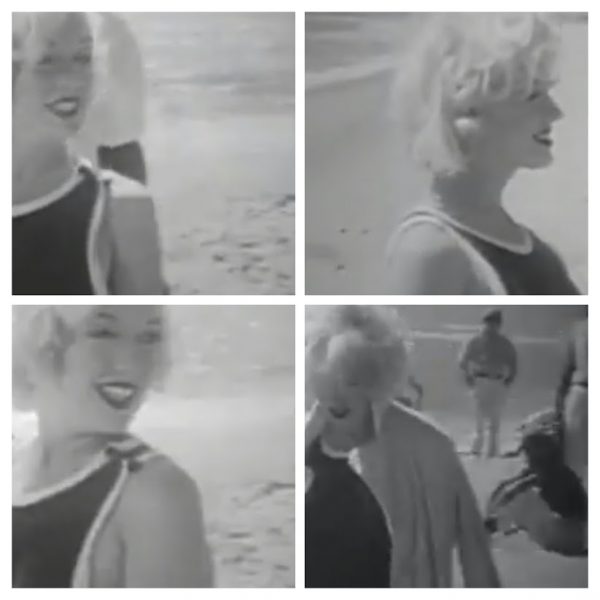 Rare footage of Marilyn and Jack Lemmon filming Some Like It Hot on Coronado Beach in 1958 has been discovered in the CBS San Diego news archives – you can watch it here. 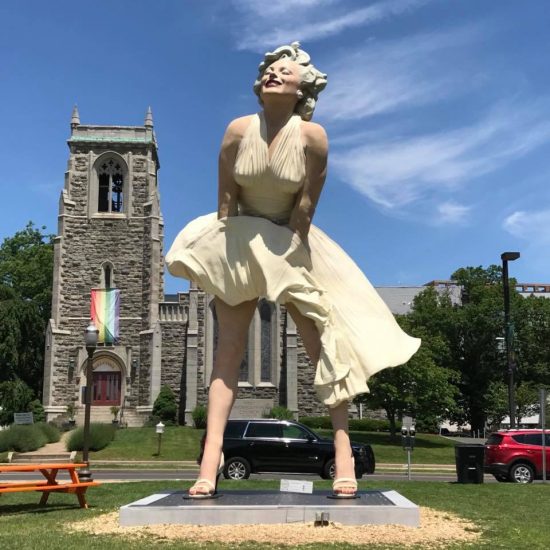 The world’s media has been eager to report on the alleged controversy caused by the summer-long installation of Seward Johnson’s ‘Forever Marilyn‘ at Latham Park in Stamford, Connecticut. The sculpture, inspired by the iconic ‘subway scene’ from The Seven Year Itch, shows Marilyn’s dress blowing in the wind – and its placement has her rear end facing a local church.

Although the headlines would have us believe that the church’s response has been one of puritanical outrage, the reality is more nuanced – with even the harshest critics stating that it wasn’t Marilyn herself that they found distasteful, but the overtly sexual way in which she is depicted.

“I just find the position to be offensive,” local resident Lorri Tamburro told the Stamford Advocate. “I looked at it and it was, in my eyes, very disrespectful. I think because with what I saw with all the little kids looking up, the height is ruining it. It’s ruining beautiful Marilyn.”

Parishioner Jean Meyer, however, felt differently. “You’re going to have different opinions on it, but you have to have a sense of humor,” she said. “There are bigger issues to worry about,” said another church member, Maureen Matthews. “But I’ll be interested to see how people talk about it on Sunday.”

“It is art and we don’t believe it’s offensive,” said Sandy Goldstein, who helped to organise this year’s ‘Art in Public Spaces’ exhibit. Pointing out that many nude female statues can be seen in Europe (including near churches), she added, “We absolutely mean no disrespect to the church.”

“The issue is, why that statue?” Rev. Dr. Todd Grant Yonkman of the First Congregational Church wrote in an email to the Associated Press. “Marilyn Monroe was an artist deserving our respect. Why appropriate her image in this way. Is this the best we can do?”

In a report for HuffPost, Carol Kuruvilla spoke with Yonkman:

“He said he understands the statue is a ‘piece of art’ that is ‘designed to make the viewer uncomfortable … It makes me uncomfortable,’ Yonkman told HuffPost in an email. ‘The question for each one of us is, What will you do with your discomfort? I am choosing grace.’.

Yonkman said he and his congregation, which is part of the progressive mainline Protestant denomination the United Church of Christ, don’t plan on taking any action about the placement of the statue. Instead, they want to use it as an opportunity to connect with their community.

The church has been planning to host a Pride event in Latham Park to show solidarity with the LGBTQ community. ‘Marilyn is a gay icon, so it turns out that this may be a fortuitous coincidence,’ Yonkman wrote.” 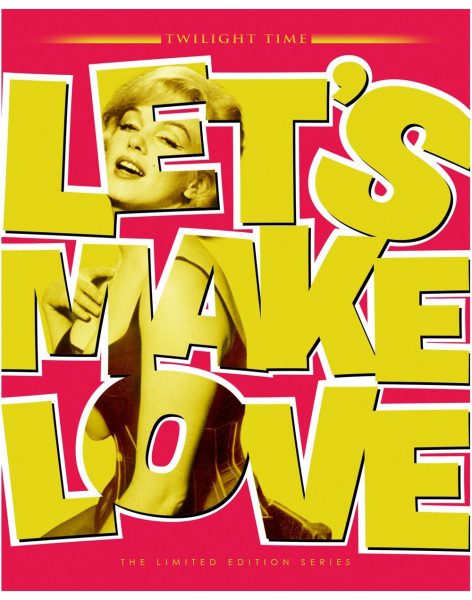 After their Don’t Bother to Knock release earlier this year, US company Twilight Time Video are launching a limited edition Blu-Ray of Let’s Make Love on June 19. (This is separate to the other upcoming reissue from UK company Signal One Entertainment.) 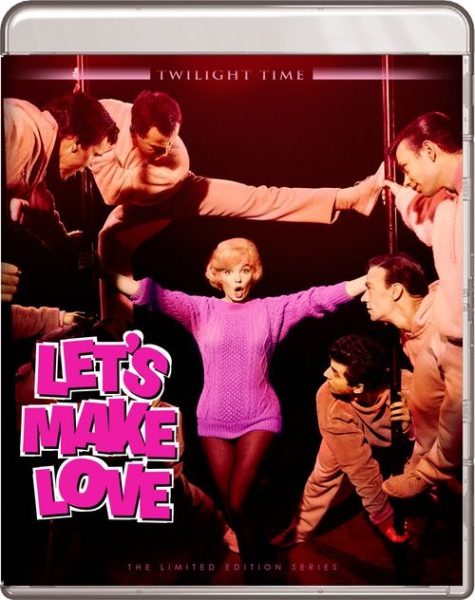 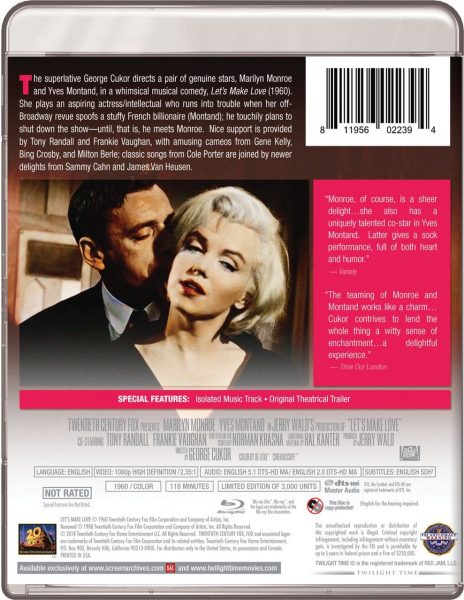 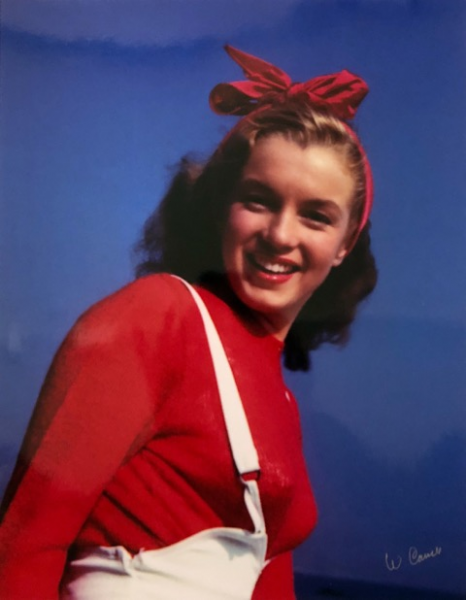 It’s still not too late to celebrate Marilyn’s birthday, and on June 21, Pop International Galleries in New York launches an exhibit in her honour, curated by Andrew Weiss and featuring hand-signed photos by William Carroll, Laszlo Willinger, Bert Stern and George Barris.