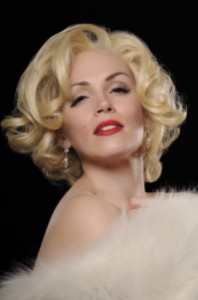 Some Like it Hotter imagines a heavenly reunion between Marilyn (played by Sarah Applewood, pictured above), Jack Lemmon and Tony Curtis. First staged in 2011, the play comes to the Devonshire Park Theatre in Eastbourne on the Sussex coast on May 15 for a four-day run. It’s the first stop in a nationwide tour – more details here.

Seward Johnson’s giant sculpture, ‘Forever Marilyn‘, will stay in Palm Springs until September, reports KESQ. Also, a series of outdoor movie screenings are planned, including Monkey Business (May 3) and Niagara (May 17) – culminating in a celebration of Marilyn’s birthday on June 1st.

Thanks to Scott at MM Collection Blog

The Hollywood Costume exhibition, a hit in London last year, has now moved to the Australian Centre for the Moving Image in Melbourne. The exhibit includes Marilyn’s iconic dresses from The Seven Year Itch and Some Like it Hot (the designer for the latter was Orry Kelly, a native Australian).

The Emerson Junior High Class of 1941 photo, featuring a young Norma Jeane Baker, is among several Monroe-related items on offer at Bonhams’ Entertainment Memorabilia auction, scheduled for May 5th.

The photo bears an inscription on the back by the then 15-year-old Norma Jeane, dedicating it to a classmate of hers named George, a friend she describes as a ‘super swell fellow’.

On the back of the 24-inch print she wrote: ‘To “Georgie”. A super, swell fellow, in fact really keen! (I really mean it Geo.) Norma Jeane Baker.’

Also featured in next month’s auction are a group of photos taken by Marvin Scott at the 1955 charity circus in Madison Square Garden, where Marilyn rode a pink elephant; a copy of Anita Loos’s novel, Gentlemen Prefer Blondes, inscribed ‘to Linda’ by Marilyn; and photos by Andre de Dienes and George Barris.

Season 2 of Smash has seen falling ratings and a downgrade on US TV schedules. However, fans of the show have been glad to see Ivy (Megan Hilty) regain her role as Marilyn in the musical, Bombshell. The twelfth episode, ‘Opening Night’, has now aired, and Smash will continue on NBC every Saturday, while the season finale – a double episode – will air on Sunday, May 26th.

London’s Victoria and Albert Museum is becoming quite the mecca for all things Marilyn. On Thursday, June 6, from 2-3pm, Michelle Morgan – author of one the best biographies, Marilyn Monroe: Private and Undisclosed – will be giving a one-off lecture, focusing on ‘a fresh perspective to the many controversies in the private life of one of Hollywood’s most famous faces.’ Tickets cost £12, including refreshments and a chance to meet the author herself.

In his 2003 book, The Bad and the Beautiful: Hollywood in the Fifties, Sam Kashner wrote, ‘[Inge] also struck up a friendship with Marilyn Monroe, who was drawn to [his] intelligence and creativity. The fact that he was not interested in her sexually also seemed to give their relationship a kind of tenderness it might have lacked otherwise. Inge and Monroe would occasionally be linked in the media during the mid-1950s, but their interest in each other was purely platonic.’

In his 2007 book, Inside Marilyn Monroe, John Gilmore notes that Marilyn considered starring in Inge’s A Loss of Roses, but ultimately decided on the ill-fated Something’s Got to Give instead. (Gilmore was up for a role in the project, renamed Celebration. Costume designer Travilla had even drawn up sketches for Marilyn’s character.) Inge’s project was eventually filmed with Joanne Woodward, under a rather less poetic title – The Stripper.

Joe and Marilyn, by celebrity biographer C. David Heymann, was due to be published by Atria, an imprint of Simon & Schuster, on April 30th. However, several online bookstores have now moved that date forward – some as far as 2020!

Heymann passed away in May 2012. According to his New York Times obituary, he was no stranger to controversy. Was Joe and Marilyn completed, I wonder, and will it ever see the light of day?

Butterfly in the Typewriter is Cory McLauchlin‘s new biography of John Kennedy Toole, the New Orleans-based novelist whose comic masterpiece, A Confederacy of Dunces, was unpublished until long after his suicide in 1969, aged 31.

Fans of the author may not have known that he – like many of Louisiana’s young men – was a passionate admirer of Marilyn Monroe. In 1955, he wrote to New York Times critic Bosley Crowther, praising his favourable review of The Seven Year Itch.

An enthusiastic comic book artist during his college years, Toole later created The Hullabaloo, a three-part series partly inspired by Marilyn’s performance in Bus Stop. ‘He depicts a voluptuous Monroe leaning in ecstasy against a bus stop post,’ McLauchlin writes. ‘Two students observe her and whisper, “I don’t know who she is, but she’s been here for two days.” The next week the same frame was republished with the caption, “What? She still here?” Two weeks later, the image appears with the caption, ‘”NOoooo!” The homely ladies appear threatened by the beauty that simply will not leave.’

Toole was shocked by the news of Marilyn’s death in 1962, which he learned while teaching English as part of his military service in Puerto Rico. Toole commented, ‘Her life and death are both very sobering and even frightening. In my own way I loved Marilyn Monroe very much. Isn’t it a shame she never knew this…’

Toole, who lived with his mother, experienced great difficulties in forming relationships with women. He was devastated by the assassination of John F. Kennedy in 1963, and his depressive tendencies were certainly aggravated by repeated rejections from publishers.

A Confederacy of Dunces was finally published in 1980, and a year later, Toole was posthumously awarded the Pulitzer Prize for Fiction (an honour that Marilyn’s third husband, Arthur Miller, had previously been awarded for his 1949 play, Death of a Salesman.)

Magnum photographer Dennis Stock – who shot Marilyn at work on Bus Stop and The Misfits – is the subject of a new documentary, Beyond Iconic, directed by Hanna Sawka and screening at the Rosendale Theatre Collective in the Hudson Valley, New York State, tomorrow (April 21st) at 7.15pm.