Marilyn graces the cover of a new Life magazine special, ‘Hidden Hollywood: Images of a Golden Age’. Inside are more images from Ed Clark’s photo session with a young Marilyn at Griffith Park in 1950, as well as his famous shot of Marilyn and Jane Russell sipping Coke on the set of Gentlemen Prefer Blondes. Other stars captured at work and play featured include Elizabeth Taylor and many more. It is available at stores across the US and, for international readers, via Amazon.

And if you’re a dab hand at embroidery (sadly I’m not), Marilyn also features in UK magazine Cross Stitch Collection this month. 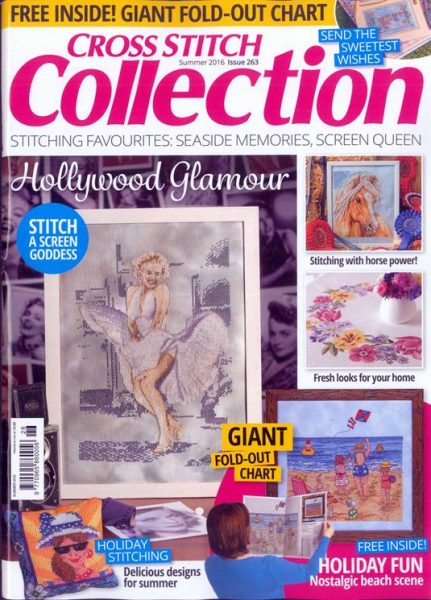 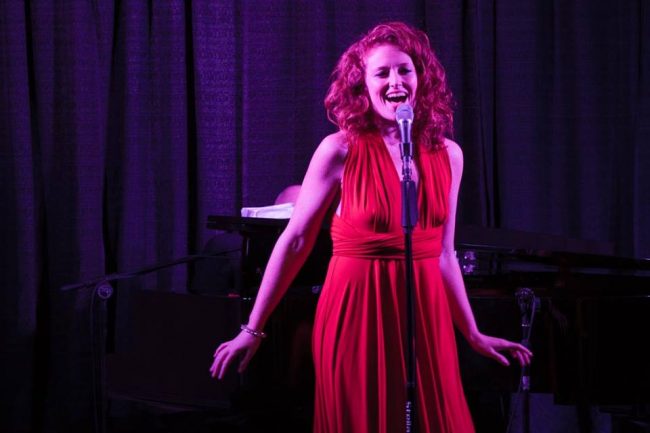 “In Marilyn in Fragments, a compressed one-hour show at the Laurie Beechman Theater on Tuesday evening, the rising cabaret singer Marissa Mulder wove passages from Monroe’s diaries and 20 songs into a compelling portrait…

Ms. Mulder delivers a theatrical monologue in a stream of consciousness while her brilliant accompanist, Jon Weber, speaking only a few words, plays the role of sympathetic therapist. Their rapport is distilled in a rendition of Tom Waits’s woozy barroom song ‘The Piano Has Been Drinking (Not Me)’ …

Ms. Mulder, wide-eyed and curly-haired, makes a bewitching and slightly scary Monroe, whose name is never mentioned in a narrative devoid of gossip and name-dropping … Her infatuation with movie stardom is reflected in a rendition of ‘It’s Only a Paper Moon’…

Marilyn in Fragments does not aim to please. This downbeat psychological portrait is uncomfortable to watch because the rawness of the performance is so believable … Trent Reznor’s ‘Hurt’, the song that sums up the show’s X-ray vision, captures its barely suppressed anguish and despair…”

Canadian-born celebrity photographer Douglas Kirkland’s iconic 1961 images of Marilyn wrapped in silk sheets (as well as his 2001 remake with Angelina Jolie) are featured in a retrospective at the Izzy Gallery in Toronto, Canada, as Nigel Hunt reports for CBC.

“Kirkland recalled how, as a young photographer, he went to meet the movie star in her apartment to discuss ideas for the photo shoot.

‘She said: I know what we need. We need a bed, a white silk sheet, Dom Pérignon champagne and Frank Sinatra records. We don’t need anything more. And I’m going to be in that bed with nothing on!’

‘Could you imagine what a young man like me was thinking?’

That session produced several images that count among the most iconic shots of the much-photographed screen starlet.

For that, Kirkland credits the sexual energy in the room that emanated from his subject.

‘She was just under this white silk sheet, nothing on. And I’m a kid from Fort Erie!'”

Made on a shoestring over ten days as a Columbia B-feature, Ladies of the Chorus (1948) gets a rare screening at the Star Cinema in Bendigo, Australia  next Wednesday, June 1 (Marilyn’s 90th birthday), reports the Bendigo Advertiser. While not a great film by any means, Ladies of the Chorus (also streaming on Youtube) offered Marilyn her first lead role, plus a chance to sing and dance, and her first screen kiss. It comes first in a double bill with River of No Return, while The Seven Year Itch is showing on June 25. These screenings accompany the Bendigo Art Gallery‘s acclaimed exhibition, Twentieth Century Fox Presents Marilyn Monroe, on display until July 10.

Marilyn Monroe: The Woman Behind the Myth, an exhibition of the remarkable collection of Ted Stampfer, will be on display at the Palazzo Madama in Turin from June 1 – Marilyn’s 90th birthday – to September 19, reports Italy’s Huffington Post. (As previously reported, the exhibit will then move to Amsterdam in October, under the alternate title of Happy Birthday Marilyn.)

Marilyn Monroe was one of the world’s most photographed women, but her mother Gladys, who suffered from severe mental illness, was a more shadowy figure. In an article for the Los Angeles Times, Katherine Yamada reveals how Louie Deisbeck of the Glendale News-Press, who died in January this year, captured a rare image of Gladys Eley (her deceased third husband’s name) as a 60 year-old on the run from Rockhaven Sanitarium in July 1963. 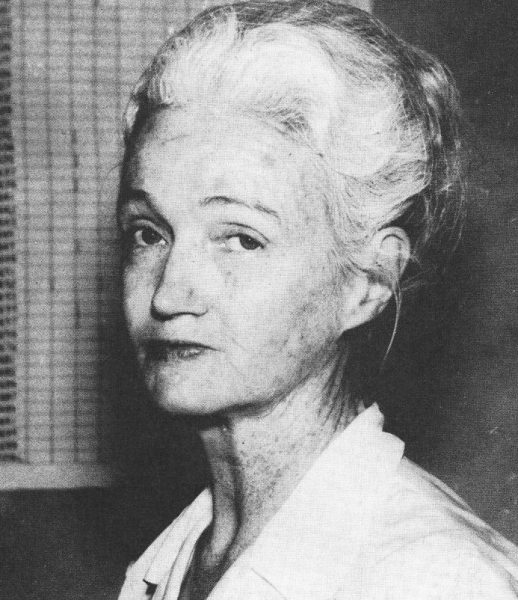 “Less than a year after Monroe died, the 60-year-old Eley fashioned a rope out of two uniforms, climbed through an 18-inch-square closet window and lowered herself to the ground. After climbing over the wire mesh fence surrounding the property, she began walking.

Twenty-four hours later, she was discovered some 15 miles away in a church on Foothill Boulevard. She had spent the night in the church’s utility room, sitting near the water heater to keep warm.

The minister who found her called the police; they were soon followed by Glendale News-Press photographer Louie Deisbeck and a reporter.

Deisbeck, who had been with the newspaper since 1957, had many contacts in the city.

‘Police and firemen contacted him all the time in those days, they knew to call him directly at home,’ his son Rusty said in a recent phone interview.

Deisbeck was met at the church by two female police officers. ‘It was real hush hush,’ his son recalled.

After he got the photo — the first taken of Eley in more than 20 years [although several family photos of Gladys were taken in the late 1940s] — Deisbeck raced back to the News-Press, leaving the reporter to get the story.

The police officers told the reporter (who did not get a byline in the July 5, 1963 article) that Eley stated she wanted to get away from the sanitarium and practice her Christian Science teaching. After determining that she was unharmed, they returned her to the sanitarium.

‘That was the most famous picture he ever did,’ son Rusty said. ‘He sold it to magazines and newspapers all over the world.'”

Alan Young, who played Wilbur Post on Mister Ed – the classic 1960s TV sitcom about a talking horse – has died aged 96 at the Motion Picture and Television Home in Woodland Hills, California, reports The Guardian.

Born in Northumberland to Scottish parents in 1919, Young emigrated to Canada as a child. During his high school years he hosted a CBC radio show. He married in 1940 and had two children, before moving to New York in 1944, where he began hosting The Alan Young Show on NBC Radio.

In December 1946, the now-divorced Young met a young Marilyn Monroe when she promoted his show in highland dress on a Rose Bowl float in Los Angeles. They later went on two dates, as he recalled in a 2012 interview with Scotland’s Daily Record.

He was also interviewed by Michelle Morgan, author of Marilyn Monroe: Private and Undisclosed. He remembered taking her to the Brown Derby club after the parade; but as neither of them liked alcohol, they decided to go elsewhere and sip cocoa instead. “She seemed like a frightened rabbit at first,” he said, “and I didn’t realise she had been raised without parents. I really liked her.”

On their first date, Young picked her up from the house where she was living with family friend Ana Lower. He remembered that Ana seemed ‘suspicious’ of his intentions. Norma Jeane (as she still called herself then) explained that Ana was a devout Christian Scientist – a faith she and Alan also shared.

Their second date ended in disaster, as Alan tried to kiss Norma Jeane as she was turning her head away, and ended up kissing her ear instead. “I was so embarrassed about it that I never phoned her again,” he admitted.

He made his screen debut in Margie (1946), at Marilyn’s home studio of Twentieth Century Fox, and later appeared alongside Clifton Webb in Mr Belvedere Goes to College (1949.) He married Virginia McCurdy in 1948, and they had two children. In 1950, The Alan Young Show moved to television.

By the early 1950s, Marilyn was also a major star. “I was working at the studio when a blonde girl rushed up and yelled ‘Alan!'” he told Michelle Morgan. “She kissed me and asked about my parents and asked me to give her a call. After she had gone the make-up man asked how long I’d known Marilyn Monroe and I answered, ‘About two minutes!’ That was the last time I ever saw her.”

In 1955, Young would star opposite Jane Russell in Gentlemen Marry Brunettes, a sequel to  Monroe’s 1953 smash hit, Gentlemen Prefer Blondes. After Marilyn declined to reprise her role, Jeanne Crain took her place as Lorelei Lee. He later starred in the classic sci-fi movie, The Time Machine (1960.) 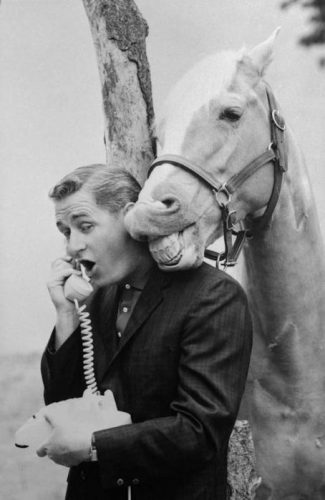 Young’s most famous role, in TV’s Mister Ed, began in 1961 and ran for five years. Afterwards, he continued making guest appearances in numerous television shows, movies and as a voice actor for cartoons and video games.

After nearly fifty years together, Young and McCurdy were divorced in 1995. He married Mary Chipman shortly afterwards, but they divorced two years later. He returned to the stage in a 2001 revival of Show Boat, and his final credit was in 2015, as the voice of Scrooge McDuck in a series of Mickey Mouse shorts.

Magnum alumni Bruce Davidson, who photographed Marilyn behind the scenes during filming of Let’s Make Love and The Misfits in 1960, is the subject of a new book by Vicki Goldberg in the Magnum Legacy series, reports CNN. (It follows the first Magnum Legacy book about Eve Arnold, another photographer of Marilyn’s, which was published last year.)

“What makes Davidson’s photographs so compelling is that they stem from patience and an ability to empathize with his subjects.

‘I stay a long time,’ he said. ‘My eyes open to their lives. In my silence, they feel secure. My philosophy is to stay until it becomes a subject. I am an outsider on the inside.'”

Yours Retro is a brand new UK nostalgia magazine from the Yours team. Grace Kelly adorns its first cover,  while Marilyn is pictured in several articles inside, including ‘The Birth of the Bikini’, ‘Ghost Singers of Hollywood’ (featuring Marni Nixon, who voiced the soprano segment at the beginning of ‘Diamonds Are a Girls’ Best Friend’), and a profile of the British-born gossip columnist, Sheilah Graham. Out now for £3.99.

Although Marilyn’s performance of ‘Happy Birthday Mr President’ at Madison Square Garden on May 19, 1962 – fifty-four years ago today – has become legend, she wasn’t the only star that evening. Diahann Carroll, who sang at the gala’s after-party in the home of campaigner Mac Krim, recalled the occasion in a recent interview with Oprah Winfrey, reports the Huffington Post.

‘It was a very exciting night. Everybody in the world was there,’ Diahann remembered. ‘Marilyn was hysterical, but very good. It was good to watch her at work. I think we all enjoyed it.’ As for Kennedy, ‘he was extremely pleasant,’ she said. ‘He was a very entitled human being, but you had to forgive him for that.’

Diahann Caroll was previously interviewed by J. Randy Taraborrelli for his 2009 book, The Secret Lives of Marilyn Monroe, telling him of her first encounter with MM in 1960, while singing at the Mocambo Club in Los Angeles. Diahann was then pregnant with her daughter Suzanne, and knew of Marilyn’s struggle to have children. “I took her hand and put it on my stomach and said, ‘You pat right there, sweetheart, and say a prayer and a wish, and I hope with all my heart that your dream comes true.’ She looked at me with tears in her eye, and said, ‘Oh, I do, too. I do, too.'”

They met again in Mac Krim’s apartment in 1962. ‘It’s certainly her beauty I remember most,’ she told Taraborrelli. ‘As I sang, I distinctly remember being somewhat distracted by her gaze. Her tragic beauty, so vulnerable … so lost.’