As a new Judy Garland biopic is released, Inkoo Kang looks at how classic female entertainers are portrayed, over at Slate. Her analysis is interesting, though I would argue that ageing is not as central to My Week With Marilyn (set at the peak of her career) as it is to Judy and Film Stars Don’t Die in Liverpool (another recent biopic of a neglected screen icon, Gloria Grahame), which are both set at the end of the womens’ lives. In fact, the strongest link between all three subjects might be their loneliness.

“It’s obvious enough why Judy and company keep getting made … [Michelle] Williams used her portrayal as Monroe to play against type, injecting a dose of flirty, cunning sexuality into her screen image and earning herself a Golden Globe and an Oscar nomination in the process … These films do revise the public images of their titular characters in meaningful ways … Monroe—still considered the ultimate dumb blonde in too many circles—is reclaimed as a serious actress with lofty ambitions.

But these films are also, by design, not as empathetic toward their subjects as they could be. Each movie is too enamored of its legend, of her talent and beauty, to acknowledge that her circumstances and pathologies aren’t exceptional but widely shared, borne largely of gendered inequality: unequal pay, imbalance of power, public hypersexualization, and the fast-approaching or long-past expiration date on her usefulness to Hollywood. It’s likely not a coincidence that all three movies are set in England, far from where any Hollywood star ostensibly should be …

But if the film industry’s #MeToo movement has reminded us of anything, it’s that, even in Hollywood, women’s experiences of pressure and discrimination aren’t so much unusual as devastatingly similar. Too many women lived in silence and shame, believing that their encounters were unique, or even that the abuse was somehow their fault, but after the dam broke, we understood how many of these stories were practically interchangeable, no matter the stars’ wattage, or whether they were stars at all.

But by failing to account for the unfortunate commonness of their fates, at least within the entertainment industry, the movies of this genre tend to become opportunities to focus morbidly and myopically on the self-destructive habits of a flailing figure, rather than understand the larger context that gave rise to her. The individual struggle of a Garland, Monroe, or Grahame may be inherently interesting in tight close-up, but these movies would be more revealing if they zoomed out a little to show the fuller picture.”

My Week With Marilyn, the 2011 movie about her time in England, returns to Netflix today. Michelle Williams, who won a Golden Globe for her performance as Marilyn, is currently starring choreographer Gwen Verdon in the HBO series, Fosse/Verdon. Born in Culver City, California in 1925, she married journalist James Henaghan in 1942, but left him after the birth of their son Jimmy. (Henaghan later interviewed Marilyn on several occasions, and wrote a tribute to her for Parade magazine in 1971, which you can read here.)

Verdon later worked as an assistant to choreographer Jack Cole, coaching stars like Lana Turner, Rita Hayworth, Betty Grable, and Marilyn (seen above with Jane Russell on the set of Gentlemen Prefer Blondes, and rehearsing for There’s No Business Like Show Business.) In 1953, Verdon starred in the Broadway production of Can-Can, winning her first Tony award. (Marilyn would later be offered the lead in Fox’s big-screen adaptation, but the role was ultimately played by Shirley MacLaine.)

“From the people that I’ve spoken to, the thing I kept hearing over and over again was that [Gwen Verdon] was like the sunshine in the room,” Michelle Williams said during a panel interview with the Television Critics Association (as reported here.) “The way that I’ve come to think of her is someone who is always trying their hardest and will occasionally be backed up against a wall where she’s cornered and things aren’t in her control anymore. But as much as she possibly could, she was constantly trying to rise above and be her best self at all times.”

“I remember also this thing that Marilyn Monroe said about her,” Williams added. “Marilyn said, ‘If Gwen Verdon can’t teach you how to dance, you’re rhythm bankrupt with two left feet.'”

In 1999, Gwen was the artistic consultant on Fosse, a Broadway musical tribute to her former partner, who had died in 1987. Gwen Verdon passed away in her sleep at the home of their daughter Nicole Fosse in Woodstock, Vermont in October 18, 2000. That night at 8 pm, Broadway dimmed its lights in her honour. 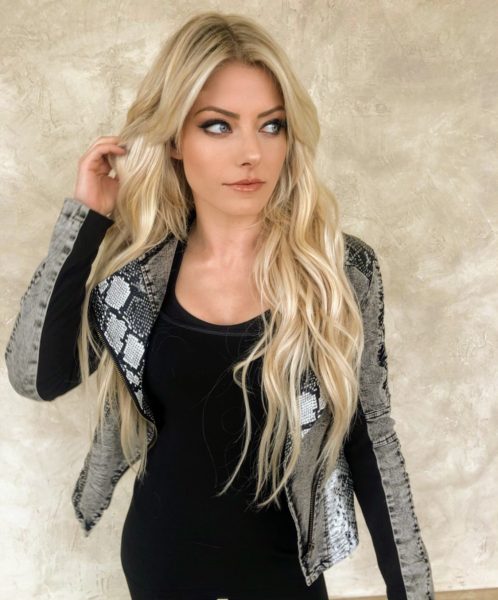 “In the moments leading up to WrestleMania 35, where she served as the show’s host, witnesses caught Bliss pacing furiously in the backstage areas of MetLife Stadium. For those who were unaware, there was a transformation taking place: the kindhearted Alexis Kaufman was no more, replaced by the conniving Alexa Bliss.

‘I love Marilyn Monroe,’ said Kaufman, who is known on a worldwide scale as Bliss. ‘And there is a scene in My Week with Marilyn where she is this shy, timid person. Then she turns to the guy next to her and asks, “Do you want to see me be her?” So she turns into Marilyn and her entire demeanor changes—and everyone recognizes her. That’s what I think of Alexa Bliss: she is not me, she is the complete opposite of me.’

Bliss has the biggest heart in WWE but plays the cruelest character.

‘I love portraying a bad guy,’ said Bliss. ‘I can go the extra mile with all the creativity. Plus, you can expect a lot of sass …'”

David Parfitt, producer of My Week With Marilyn (2011) has accused Harvey Weinstein, the disgraced movie mogul whose company distributed the film, of assault, in Working With Weinstein, a new documentary to be aired on British television tonight, as Peter White reports for Deadline.

“‘When we actually got through the main shoot and into the test, he decided it wasn’t enough Marilyn’s film and that he wanted more Marilyn,’ Parfitt said in the documentary. ‘The scores came in at the end of the test and they were very good, and I think he’d expected it to be not good. In his fury about it doing so well when he thought it wouldn’t, he physically assaulted me. We were talking at the back of the theater after the audience had left, but the Miramax crowd were around, and he pinned me up against a Coke machine and threatened all sorts of stuff. It was very scary. But he was just furious that the film in our version had worked.’

A spokeswoman released the following statement on behalf of Harvey Weinstein.

“Mr. Weinstein categorically denies Mr. Parfitt’s claims as provably untrue and outrageous fiction. Mr. Parfitt and Mr. Weinstein had creative differences and any conflict between them was solely over their different visions for the film. While they had a series of spirited arguments where Mr. Weinstein made a lot of stupid remarks that he wishes he could take back, nothing physical happened.

The original version that Mr. Parfitt screened, didn’t include the musical numbers that Mr. Weinstein fought and personally financed to have included in the award winning film. In David Parfitt’s version, the movie felt like an ensemble piece. With Simon Curtis and Harvey Weinstein putting in the musical numbers, it felt like a Marilyn Monroe story.

Michelle Williams won the golden globe for her performance in the best musical comedy category and everyone that was associated with the movie, who saw it with the musical numbers, liked it better.'”

With the opening of the BFI retrospective, there has been much talk of Marilyn in the UK media this week. There was a discussion of Marilyn’s business acumen on Radio 4’s Woman’s Hour on Thursday; you can listen again here.

On BBC2 tonight at 9 pm, Jonathan Ross presents an hour-long documentary, Pinewood: 80 Years of Movie Magic. As Marilyn filmed The Prince and the Showgirl at the legendary English studio in 1956, it is followed at 10:30 pm by a screening of My Week With Marilyn, the 2011 movie about the offscreen battles between Marilyn and her co-star, Sir Laurence Olivier, starring Michelle Williams and Sir Kenneth Branagh.

Self-proclaimed ‘Psychic to the Stars’ Kenny Kingston has died aged 87, reports the the Los Angeles Times. Kingston claimed that Marilyn first visited him in 1953, on the advice of her friend, actor Clifton Webb. She got out of a cab five blocks from his home and walked the rest of the way, explaining, ‘I didn’t want your reputation spoiled.’ Kingston said that they remained friends until her death – and long afterward…

According to Kingston, Marilyn’s spirit was reunited with ex-husband Joe DiMaggio following his death in 1999. During filming of My Week With Marilyn in 2011, the celebrity psychic told Yahoo Voices that MM contacted him from beyond the grave to express her approval of actress Michelle Williams.

In honour of the 50th anniversary of Marilyn’s death, the Princeton Public Library will be screening four movies over the next week: The Prince and The Showgirl (4pm) and My Week With Marilyn (7pm, both August 3rd); The Misfits (4pm, August 4); and on August 5, ‘MM: The Never-Ending Dream’, a lecture by Paul Sofian, at 3pm, followed by Some Like it Hot at 4pm.

My Week With Marilyn is the end-of-season Final Film Fling at the Bradford on Avon Film Society, St Margaret’s Hall, near Bath, Wiltshire, on this Friday, April 20, at 7.30 pm.

Tickets are priced at £13 – including a fish and chip supper – and can be bought in advance from the Tourist Information Centre.