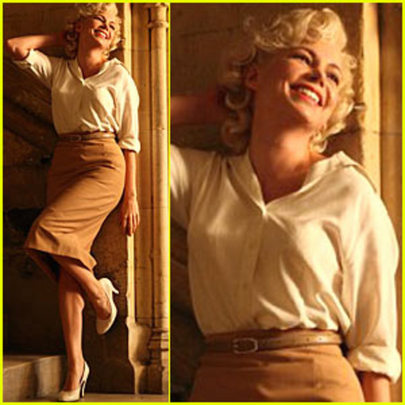 My Week With Marilyn is to be screened at the Toronto International Film Festival in September (shortly before its general release), and its star, Michelle Williams, is expected to appear, reports Toronto.com 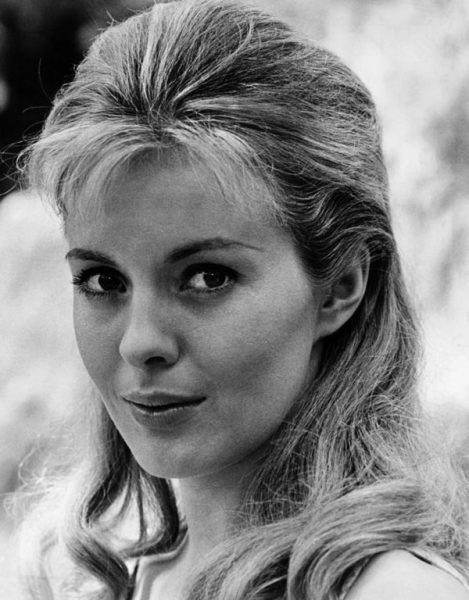 Actress Jean Seberg had a few things in common with Marilyn. They shared two directors, Otto Preminger and Joshua Logan. I have often thought that Jean’s role in Logan’s Paint Your Wagon might also have suited Marilyn.

Both Marilyn and Jean were monitored by the FBI during the J. Edgar Hoover era. Marilyn was followed, and perhaps even bugged, because of her connections with liberals like Arthur Miller and, possibly, the Kennedys (whom Hoover hated.)

During the 1960s, Seberg was pursued for her radical views on issues like civil rights. The FBI used illegally obtained information to plant a false story in Newsweek, claiming that a leading member of the Black Panthers had fathered her child.

Some researchers believe that the FBI campaign against Jean led to her suicide in 1979. Like Marilyn, she suffered from depression, and died of an overdose. Unlike MM, however, Jean left a note.

Seberg’s death is now the subject of a docu-drama, The Murder of Jean Seberg, and the stills of Daphne Guinness as Jean are somewhat Monroe-esque. 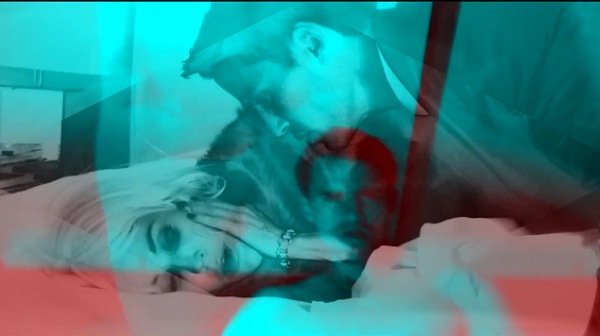 “I want to write that allusions to Marilyn Monroe coupled with the presence of alcohol and cigarettes indicate self-destruction. I want to write about the sunglasses that often conceal Guinness’ eyes, and the way her eye sockets turn into hollow holes of light when she takes them off—that this suggests a lack of identity. I want to write about the inclusion of limiting traffic signs (‘No Parking’ and ‘Dead End’), and the voice-overs and footage from past political horrors, which allude to society’s capacity to subordinate. I want to write that these elements are all suggestive of the way Hollywood and society metaphorically- or literally- murder those whom we worship, and rob the famed of individual identities through exploitation. I want to say that the film is a meditation on fame’s destruction of the celebrity. But I shouldn’t…” 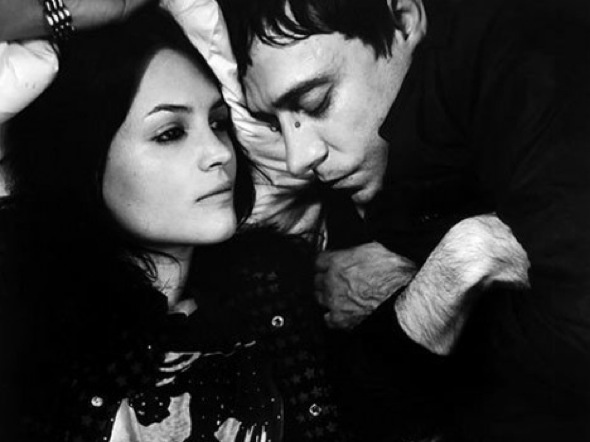 One of my favourite bands (The Kills) covering one of Marilyn’s best songs (‘One Silver Dollar’, from River of No Return): this is a win-win situation for me. The cover was recorded as part of a live session for Australia’s Triple J.

While nothing can match Marilyn’s sweet, sad rendition (in my opinion), singer Alison Mosshart offers a bluesy take on the original, and it’s a fine tribute to an underrated song. 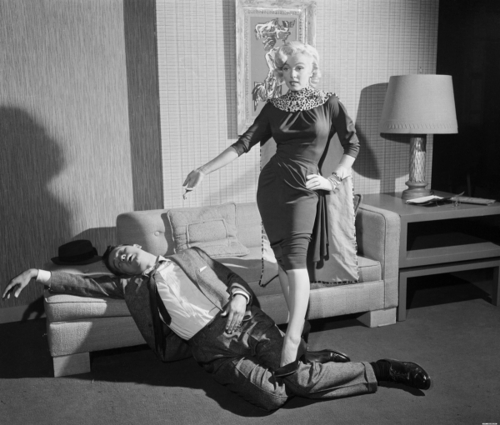 Gentlemen Prefer Blondes will be shown at dusk on August 8, as part of this summer’s Screen on the Green, National Mall, Washington. 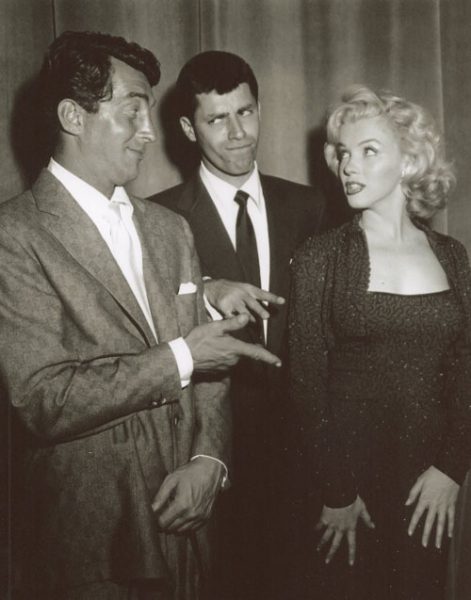 Marilyn appeared on Dean Martin and Jerry Lewis’s radio show in 1952. (The episode is included on The Marilyn Monroe Anthology.) MM is shown above with the comedy duo at the Redbook awards, later that day.

For several years now, Jerry (now 85) has claimed that he and Marilyn had an affair. He brings up the subject yet again in GQ (US version, August issue), as Liz Smith reports:

‘Here’s one Lewis tale for lovers of history, scandal, and sex-with-the-famous. Jerry insists that Marilyn Monroe never ever had that fabled affair with President John F. Kennedy. He is adamant. Lewis says she didn’t do it with JFK because … she did it with him, Jerry. He doesn’t quite explain the logic of what could have stopped MM from, you, know, making love to the president and to him as well? (Did Jerry think he’d spoiled her for all other men?)

Lewis also declares that the greatest sex-symbol used sex “to make an emotional connection.” It was more than just sex for her.

However, when asked by GQ’s writer “what was it like?” with Monroe, Jerry says: “It was … long. I was crippled for a month. And here I thought Marlene Dietrich was great!” ‘

Lewis, a presenter at 1952’s Photoplay Awards, famously jumped on a table and whistled when Marilyn walked up to the podium.

At around this time, MM is said to have told reporters that, unlike many other women, she found Lewis more attractive than Martin (her co-star in the unfinished Something’s Got to Give, ten years later.)

However, that comment doesn’t really prove anything – and I’m always a bit wary of anyone who claims to have had an affair with Marilyn near the end of her life, especially during the so-called ‘Kennedy years’.

What do you think? 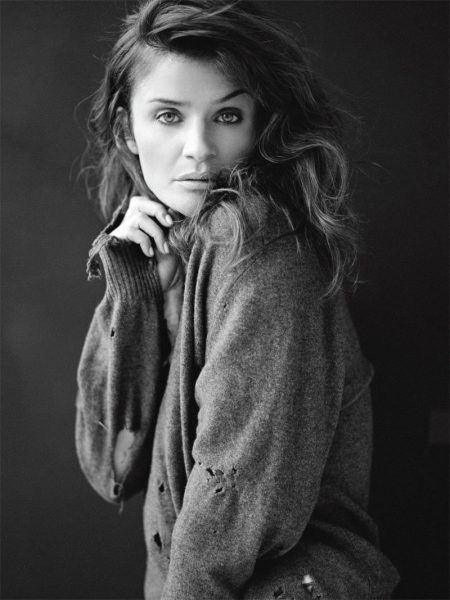 Supermodel and photographer Helena Christensen has spoken of her beauty inspirations to VogueTV:

“I always loved the style of Jean Seberg, Jane Birkin and Marilyn Monroe. A beautiful person is someone who stays true to themselves and their spirit; someone who is self-confident and can make you smile.” 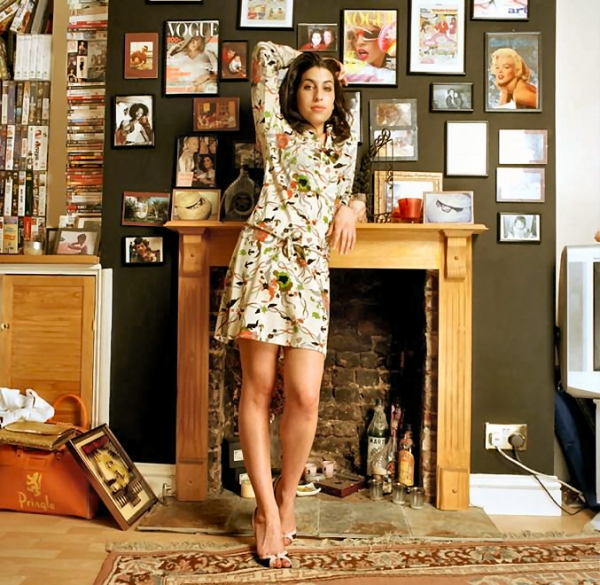 This photo shows singer Amy Winehouse, who sadly died this weekend aged just 27, at home in 2004. You may notice a framed picture of Marilyn on her wall – as her father, Mitch Winehouse, confirmed in 2008, she was quite a fan:

“One thing helping Amy is her Marilyn Monroe films. Amy loves ‘Some Like It Hot’. She’s a huge fan of Monroe and thinks she’s wonderful.” – MTV

Amy referenced another MM movie in the lyrics to ‘In My Bed’, the third single from her debut album, Frank:

It’s something I know you can’t do
Separate sex with emotion
I sleep alone, the sun comes up
You’re still clinging to that notion

Like many other women, Amy was inspired by Marilyn’s ultra-feminine style – and perhaps, on a deeper level, she looked to Marilyn’s example when she had to confront her own personal difficulties.

In the end, Amy – like Marilyn – lost the fight. As we approach the 49th anniversary of Marilyn’s death, this most recent tragedy should remind us to make time for each other, for we never know when our lives may be cut short. 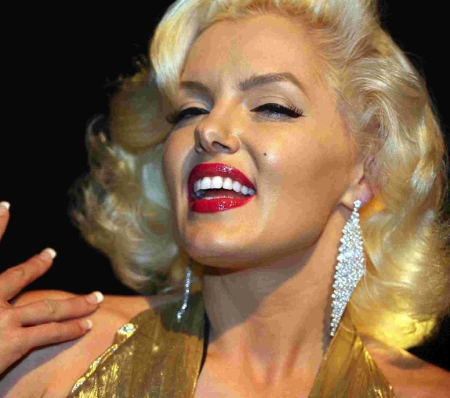 ‘I was looking in my wardrobe one day and I couldn’t find my little black dress,’ Suzie told the Bournemouth Echo. ‘But I found it here and now you can see it too.’

Of her career as a Marilyn impersonator, she added, ‘It’s the best job in the world.’ 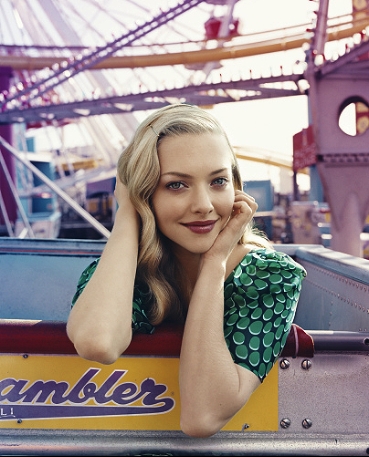 Actress Amanda Seyfried (Mamma Mia, Letters to Juliet) will play Cherie in a staged reading of William Inge’s Bus Stop on Broadway next month, according to the New York Post.

‘At this stage, it’s only a reading of the play that is attracting several stars,’ writes Jen Blushi for Zap2it. ‘However, all the buzz it is generating could mean a full stage production in the near future.’