Over at Book Riot today, Jeffrey Davies suggests six great reads about Marilyn. Among them are several titles I’ve reviewed in depth, including Lois Banner’s MM – Personal, Michelle Morgan’s The Girl, Charles Casillo’s Marilyn Monroe: The Private Life of a Public Icon, and Marilyn’s own Fragments; plus old favourites like Gloria Steinem’s Marilyn: Norma Jeane, and Marilyn’s 1954 memoir, My Story. 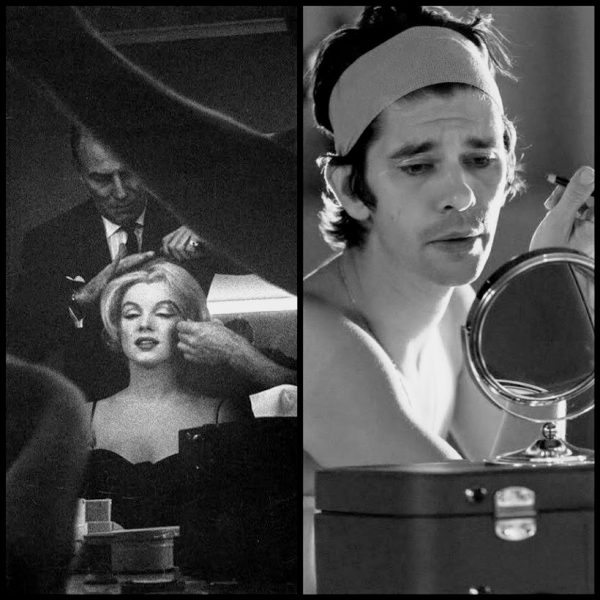 In an interview with The Times, Ben Whishaw reveals more about his intriguing role in Norma Jeane Baker of Troy, which opens at New York’s hottest new arts venue, The Shed, on April 6 through May 19.

“Whishaw, 38, is rehearsing a play called Norma Jeane Baker of Troy, in which he plays a man who likes to dress up as Marilyn Monroe. ‘We just got the costumes,’ he says. ‘I wear a dress that’s a replica of the one she wore in The Seven Year Itch — the white one where the wind comes up. They’ve also given me the bum, hips and breasts. I don’t think they’re as big as Marilyn’s, but they’re proportionate to my body. It’s a strange thing. I’m not playing Marilyn, I’m playing a man who’s infatuated with her. The play is set in the year she died and he’s in mourning for her. Apparently there was a spate of copycat suicides that year.’

To research the role, Whishaw has been reading a book called Fragments. ‘It’s bits of Marilyn’s diary, notes on hotel paper, poetry,’ he says. ‘She writes beautifully. Arthur Miller was here with her when they were doing the film The Prince and the Showgirl, and she opened his diary and read about how disappointed he was with her, how embarrassed he was being around his intellectual friends with her. Apparently this was devastating to Marilyn. All these men say how difficult she was. It makes you want to strangle them. But she really was amazing. She had a lot going on, a lot of sadness on her plate, poor darling. To be a star in that star system and those men.’

If she had been born 50 years later, does he think she would have been part of the #MeToo movement? ‘I’m sure she would have. I’ve been listening to interviews with her. She doesn’t seem afraid of anything.’

Fearless and vulnerable. It’s a contradiction that could possibly describe both of them. ‘Yes,’ he smiles.”

The gulf between Marilyn’s private and public personae is explored in a new video essay created by Lara Mubayadeen and Luke Jamieson for Film School Rejects. The short film’s title, ‘Actress Must Have No Mouth’, is lifted from Marilyn’s private journals, collected in the 2010 book, Fragments.  Other quotes are superimposed onto archival footage of Marilyn talking to the press, but unfortunately, some of her actual responses to reporters’ questions – often intelligent and witty – have been cut out, giving the footage a retrospective note of tragedy. 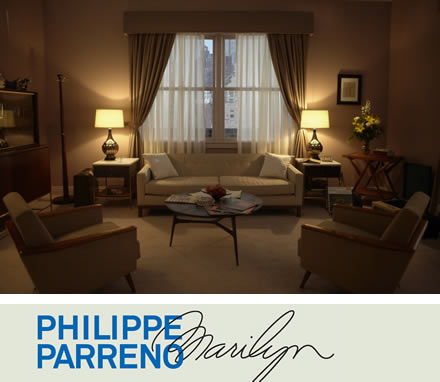 Multimedia artist Philippe Parreno’s 2012 video installation, Marilyn – based on her own writings as collected in the 2010 book, Fragments, and originally exhibited in Switzerland –  is featured in a new retrospective of his work in film, Philippe Parreno: Thenabouts, on display at the Australian Centre for the Moving Image (ACMI) in Melbourne until March 13, as Christopher Allen reports for The Australian.

“The most successful and memorable work in the exhibition was devoted to Marilyn Monroe, a figure who for half a century has been a kind of cultural palimpsest: the original actress, talented, intelligent, tragic, is overlaid with ­Warhol’s adoption of her as emblematic of the way that the modern mass media turns celebrities into two-dimensional patterns akin to brands or logos.

Parreno has recreated the hotel room at the Waldorf Astoria that Monroe occupied in New York in 1955. The camera pans around the room while the actress’s voice describes its design and furnishings: wall coverings, sofas, desks, coffee-table, ornaments. And then the camera switches to a close shot of a fountain pen writing on hotel stationery: we seem to be watching Monroe’s own pen forming her own words in her own handwriting.

But the voice is disembodied and we do not see the hand holding the pen, for all is done through computerised robotic movements. The speech is synthesised from recordings of the star’s voice, and the handwriting robot has been programmed to reproduce samples of her script. As both voice and handwriting routines are repeated, we realise that something mechanical is going on, and this is confirmed as gradually the camera takes a longer view, progressively revealing parts of the illusion.

First we see bits of scaffolding, then gradually we are shown the mechanism holding and moving the pen. And then the camera pans out to reveal that the whole room had really been a set built in a studio. Marilyn Monroe, as it turned out, had not only been reduced to a brand in her own day, but could now be synthetically reproduced, mechanically cloned as it were; a reflection, perhaps, on the further reduction of the actor, in the mass media world, to a consumer product.

The ending was interesting from another point of view too, because it was almost cliched in its use of the trope of illusion revealed. But it was also significant in being one of the few clear endings in a body of films mostly with little sense of starting or finishing.

Watching Parreno’s lengthy and not always gripping body of work, I couldn’t help reflecting that Aristotle was on to something with his conception of plot as the basic structuring device for stories.

At least the Marilyn Monroe film conformed perfectly to his definition of an ending: an action that implies something before it but nothing after it.”

If the recently-announced November sale of David Gainsborough-Roberts‘ Marilyn collection wasn’t spectacular enough, here comes news that Lee Strasberg’s Monroe archive will also be included. A limited edition, box-set catalogue is also on sale for $250. The list isn’t yet online, but collector Scott Fortner gives us a sneak preview on his blog today. Many items were previously featured in the books Fragments and MM – Personal, and have never been up for sale until now. “I’ve always thought that the 1999 Christie’s auction, ‘The Personal Property of Marilyn Monroe’, would most certainly be the most important auction ever when it came to Marilyn,” Scott writes. “However, Julien’s Auctions is moving into this same category…”

A list of Marilyn’s acting goals, jotted into an address book in 1955 and published in Fragments (2010), was posted on the Lists of Note blog in January 2012 (as reported here). After being reposted on Uproxx.com this New Year’s Day, the list has been making headlines everywhere – and it is also featured in the recently-published book of Shaun Usher’s eponymous blog, Lists of Note, alongside other lists compiled by Walt Whitman, Albert Einstein, Frank Lloyd Wright, Billy Wilder, and Norman Mailer. 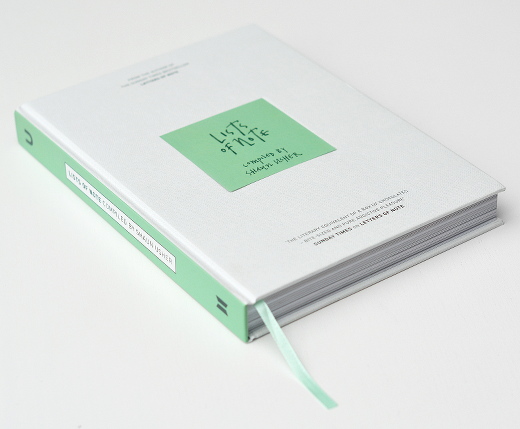 However, while the list certainly shows how focused and serious Marilyn was about acting, and ties in nicely with our own New Year’s resolutions, there’s no evidence that it was written to that purpose. As anyone familiar with her journals and correspondence will know, she didn’t write regularly and was more likely to express her thoughts and feelings when the mood took her. 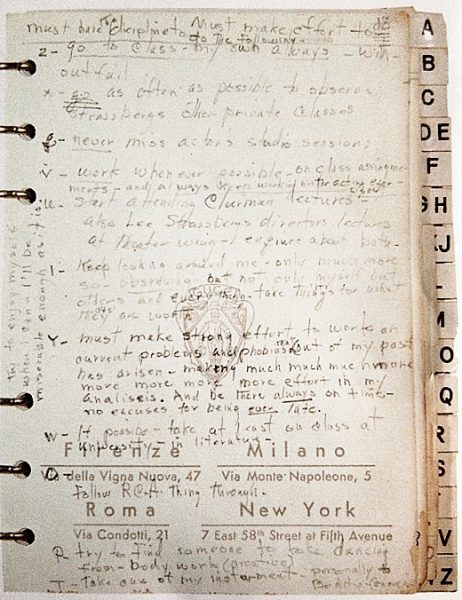 try to enjoy myself when I can – I’ll be miserable enough as it is.”

Writing for the Huffington Post, psychologist Romeo Vitelli considers a new study by Spanish psychiatrist Mercedes Fernandez-Cabana. Originally published in the medical journal, Crisis, the article speculates on what Marilyn’s personal writings, as collected in Fragments, may tell us about her possible suicidal intentions in the years leading up to her death.

But most of the writings date from the mid to late 1950s, and as far as we know, Marilyn left no suicide note when she died in 1962. These are Vitelli’s own thoughts on the investigation:

“Studying Fragments was made easier by the dates of the letters and notes left behind by Marilyn Monroe. Using the dated material as a timeline in the years leading up to Monroe’s death, Fernandez-Cabana and her colleagues were able to group the Fragments materials into four time periods ending in 1962. Statistical analysis showed a significant rise in health concerns, death issues and personal pronoun use over time. Also, the period just before her death showed a significant decrease in negative emotions, anxiety, and religious ideas.

Though there were no clear indications of suicidal intention in any of Marilyn’s Monroe’s writings, the notes written shortly before her death suggest a strong sense of isolation. The LIWC evidence does not reflect what has been typically found that depressed individuals but may indicate that her suicide death was an impulsive decision rather than a planned act.

In discussing Monroe’s death, Mercedes Fernandez-Cabana and her fellow authors avoided commenting on the elaborate theories that were raised about her possibly being murdered for political reasons. Also, the lack of any notes written in the critical few weeks leading up to Marilyn Monroe’s death means that important data may be missing from the final analysis.”

Maria Popova has posted a selection of Marilyn’s poetry (as published in Fragments) on the Brain Pickings site.

Actress Elizabeth Banks – who will read letters written by Marilyn in the upcoming documentary, Fragments – has posed as MM for Vanity Fair. (Interestingly, the photographer is one Norma Jean Roy!)

Banks starred as former first lady Laura Bush in W; more recently, she has appeared in The Hunger Games and TV’s 30 Rock. Following Marilyn’s footsteps,  she played Cherie in a 2005 production of Bus Stop.