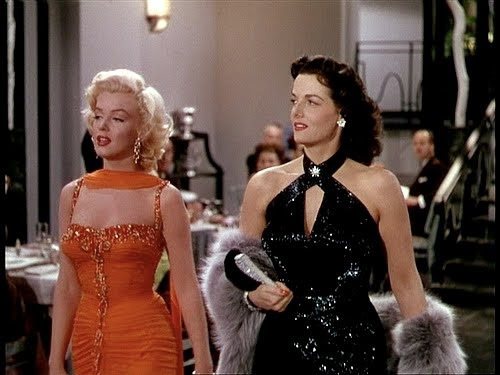 Over at BitchFlicks today, a feminist perspective on Gentlemen Prefer Blondes from Myrna Waldron, as part of this week’s ‘Women and Gender in Musicals’ series.

“The friendship between Lorelei Lee and Dorothy Shaw is one of the most positive female friendships depicted on film, and is one aspect of the adaptation distinctly improved from the original novella by Anita Loos…They’re a lot closer to ‘frenemies’ in the original, which is a surprisingly misogynistic depiction of women from a female writer. The musical version instead makes Lorelei and Dorothy inseparable. They are absolutely devoted to each other and protective of one another…Each thinks the other is foolish when it comes to relationships, but they accept each other’s differences and are loyal to each other before any other man in their lives.

Another feminist aspect of the film, one which I think is left over from the characters’ original incarnations as flappers, is their complete sexual liberation…They drink, they smoke (though they are never seen actually smoking, just buying cigarettes), they dance, they party, they stay out late. And while wealthy men like Gus’ father look down on women like Lorelei, they are completely unapologetic about their choices.

The film also depicts the women as unmistakably intelligent, albeit in different ways. Dorothy is very obviously meant to be the “smart” one, who corrects Lorelei’s mistakes, catches on to other people’s insinuations, and is always ready with a witty retort. But while Lorelei might be ‘book dumb,’ she’s not stupid. Together, Lorelei and Dorothy are master manipulators, and she’s far more devious than she lets on.

The most famous number in the musical, by far, is ‘Diamonds Are A Girl’s Best Friend’, which has endured for over 60 years and is considered Marilyn Monroe’s signature number… On the surface the song is about being materialistic – that Lorelei’s love for jewels supersedes all other things, and at the surface, yes, it would be a theoretically anti-feminist song. But I think the song is actually about a longing for financial independence.”

Gentlemen Prefer Blondes will be screened at Chicago’s Gene Siskel Film Center today at 6pm, and also on Tuesday, October 2nd, with an introduction by film scholar Fred Camper, as part of an ongoing series, ‘American Cinema of the 1950s’.

Nina Metz has reviewed this definitive musical comedy for the Chicago Tribune.

“A blatant critique of materialism wrapped up in an iridescent bow, Gentlemen Prefer Blondes indulges in Hollywood musical glitz while also offering some not-so-subtle commentary.

‘The seeds of feminism were slowly taking root,’ Camper said. ‘Women’s roles were very traditional in films, but often critiqued within those films. Gentlemen Prefer Blondes is a good example of that because it’s a parody of those cliched, stereotypical views of women.’

On its face, the film wasn’t typically Howard Hawks’ style…The so-called Hawksian woman was your savvy tough-talker who could hold her own with the guys. That’s not exactly the setup in Blondes, but there’s no mistaking Russell’s nod to the Hawks archetype. She delivers her lines with a sharp self-possessed wit that stands in stark contrast to Monroe’s winningly dumb, cream puff of a performance.

We all lose our charms in the end, to quote from Monroe’s big number, but even a movie as garish as this one has a funny way of escaping the same fate.”

This Marilyn-themed T shirt is now available for £8.00 at UK supermarket Asda. (£1 from the sale of this product will be donated to Breast Cancer Campaign and Breast Cancer Care.)

The new display, ‘Marilyn Monroe: A British Love Affair’, is set to open in London’s National Portrait Gallery this Saturday, September 29 (until March 24, 2013). Artinfo has posted a slideshow of some of the photographs to be featured. 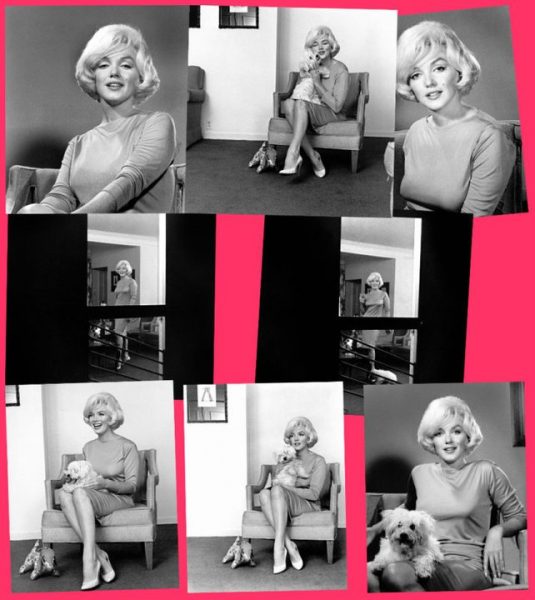 Variety has reviewed Love, Marilyn, giving us a fuller picture of the cast and materials. (David Strathairn as Arthur Miller is surely inspired casting!)

Two unearthed boxes of diary entries, letters and whatnot (some of which were published in 2010 as Fragments: Poems, Intimate Notes, Letters by Marilyn Monroe) provide the novelty and appeal to what would otherwise be a standard life-overview. The erstwhile Norma Jean Baker’s awful childhood, her stormy marriages to Joe DiMaggio and Arthur Miller, the paralyzing effects of her insecurities on film shoots, her problematic alliance with the Actors Studio, her pill consumption, et al., all constitute familiar terrain that makes Love, Marilyn seem redundant at times.

The first-person testimonies are more interesting, from archival clips of Susan Strasberg, John Huston, Joshua Logan, Jane Russell, Laurence Olivier and others to excerpts from memoirs and other writings by one of her many shrinks (read by F. Murray Abraham), Miller (David Strathairn), and analysts Gloria Steinem (Hope Davis) and Norman Mailer (Ben Foster), among others. Particularly flavorful are Oliver Platt and Paul Giamatti as Billy Wilder and George Cukor, respectively, both recalling their exasperation working with the hypersensitive box office sensation. There are also present-tense interviews with biographers, critics, Actors Studio contemporary Ellen Burstyn, and close non-celebrity friend Amy Greene (who shares some salty thoughts on Marilyn’s husbands).

While there’s no question Garbus has recruited first-rate talent to pay homage here, some of the most impressive names prove heavy-handed or simply miscast in attempting to channel the love goddess’s fragile spirit; moreover, having them act against green-screened archival materials has a tacky, pop-up televisual feel. Probably most effective in their straightforward readings are Jennifer Ehle, who gets a fair amount of screentime, and (perhaps surprisingly) Lindsay Lohan, who does not.

Suffolk playwright Lorena Cenci has spoken about her new play, All About Marilyn – to be staged at the Jerwood DanceHouse, Ipswich, by 4th Wall Productions on October 2-6 – in an interview with the East Anglian Daily Times.

“I realised that there had to be three different Marilyns – the young Norma Jeane, Zelda Zonk, the Marilyn we know from the screen, and the older, quieter Marilyn: the real Marilyn.

Set in hospital, the older Marilyn has these alternate Marilyns visit her in her mind. Her story is presented in a way that reflects the fractured nature of her own writing.”