Jemima Kirke, the New York-based artist and actress (best-known as Jessa Johansson in TV’s Girls) has revealed some of her favourite books in an interview for Vulture.

“André De Dienes: Marilyn by André De Dienes
Some of the most important pictures taken of Marilyn Monroe throughout her career with a memoir to go along with it. She and De Dienes were lovers and longtime friends. She would often visit him and take pictures purely for the catharsis of it.”

In Cold War, the new film from Polish director Pawel Pawlikowski, Joanna Kulig plays Zula, a folk singer who begins a doomed love affair with a pianist in the aftermath of World War II. In an interview for The Guardian, Joanna reveals the inspirations behind her acclaimed performance. 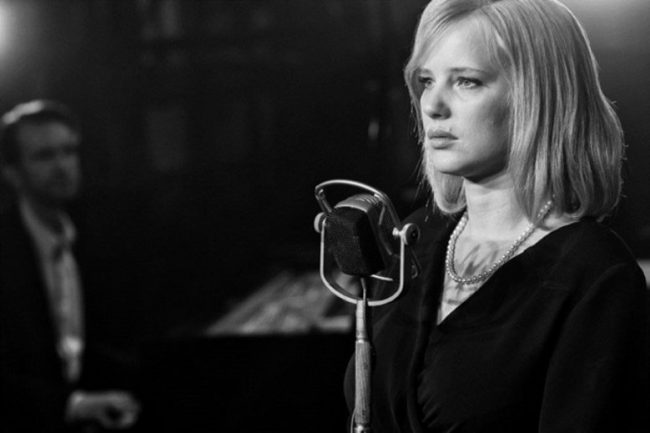 “In Cold War, the narrative is fragmented, the actors more than unusually responsible for the film’s emotional continuity as the action leaps forward several years at a time. ‘With each instalment she is different: sometimes she’s a street urchin and bad girl, sometimes she’s melancholy and then she can be sarcastic with dry wit,’ Pawlikowski says. ‘Joanna has wit but she’s not sarcastic, she’s got a very kind disposition. It was a huge challenge and it didn’t come easily, but I knew she had all these different colours in her.’

Indeed, Cold War requires a dizzying range of emotions to play across that mutable face, which can switch from blunt and defiant one moment to pinched and wounded the next. Kulig is a fine-grained actor, never more so than in those instances when she is conveying layers of contradictory feelings from beneath a showbiz veneer. One scene in particular, in which she must register from the stage her recognition of a familiar face in the audience, and then, after the interval, react to the shock of the now-vacated seat, all while persevering cheerfully with her musical number, is an unbeatable example of the performer as plate-spinner or high-wire walker.

What is she thinking of when she sings? ‘It depends,’ she says. ‘Sometimes I thought about Marilyn Monroe and Arthur Miller, how theirs was maybe a similar relationship. Or it helped to think about Amy Winehouse and her personality. I feel Zula has something of that: she is so nice and talented but at the same time she wants to destroy something.’ Whatever the situation, Kulig feels at her most charged when she is singing. ‘The emotions are closer to the surface. It is all there. Agata Trzebuchowska, who played Ida, told me: “Joanna, I love your acting, but you act the most wonderfully when you are singing.”‘” 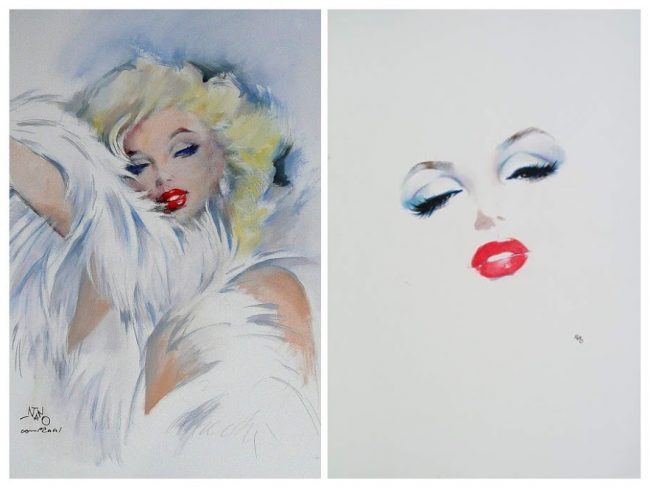 Silvano Campeggi, considered one of the great poster artists of Hollywood’s golden age, has died aged 95. After studying art in Florence, he was commissioned by the American Red Cross to paint portraits of U.S. soldiers serving in Europe during World War II. 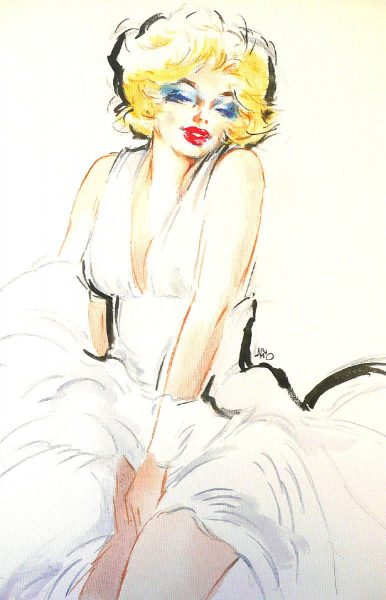 While living in Rome, he created an iconic poster for MGM’s Gone With the Wind. He moved to Hollywood, making posters for films like Gigi and Breakfast at Tifffany’s. ‘Nano’ was a friend to stars like Ava Gardner, and described Marilyn as “my icon and surely the most enchanting woman I have ever met.” However, his portraits mostly date from after her passing.

Campeggi returned to Florence in the 1970s, and remained active both in the commercial field and as an exhibiting artist.

An original negative of Marilyn and co-star Dame Sybil Thorndike in a still photo taken by Milton Greene for The Prince and the Showgirl will go under the hammer at London Gallery Auctions in Westlake Village, California this Saturday, September 1. Bids open at $1,800, with an estimate of $10,500-16,500.

Marilyn’s tragic death  shocked the world in 1962, and over fifty years later, the rumours are still coming. In a new book, Murder Orthodoxies: A Non-Conspiracist’s View of Marilyn Monroe’s Death, author Donald McGovern unpicks the myths and searches for the truth. You can read my review here.

Marilyn takes centre-stage in a new LIFE special, Deaths That Shocked the World, available via Amazon.

She also makes a rather odd appearance in this week’s National Enquirer, with the bizarre claim that Frank Sinatra was her killer. Fake news, anyone?

And on a lighter note, the latest issue of Take a Break’s Wordsearches Collection puts a Seven Year Itch spin on their regular cover character – although the brown bob and baseball cap are an unexpected twist on Marilyn’s bombshell style! 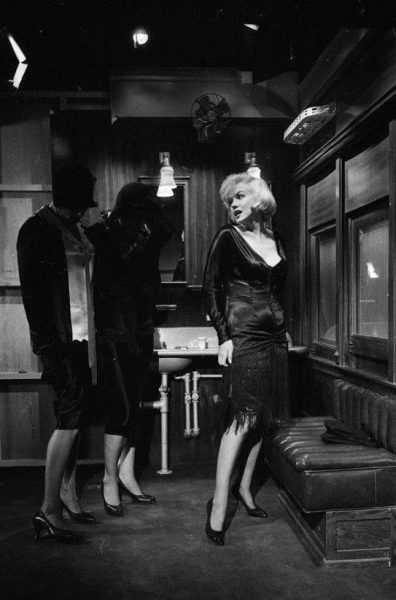 It’s a testament to the enduring popularity of Some Like It Hot that this is my third consecutive post about a public screening. This time its on the outskirts of Chicago – where the movie is partly set – at the North Riverside Public Library next Wednesday, September 5, at 2 pm. No need to book in advance, and refreshments are provided. 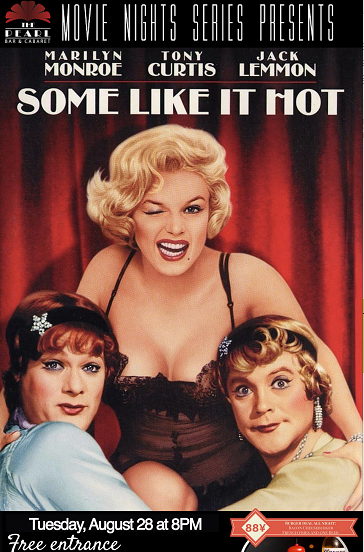 Some Like It Hot gets another free screening tomorrow night (August 28) at 8 pm in The Pearl, a cabaret bar in Shanghai’s Hongkou District. 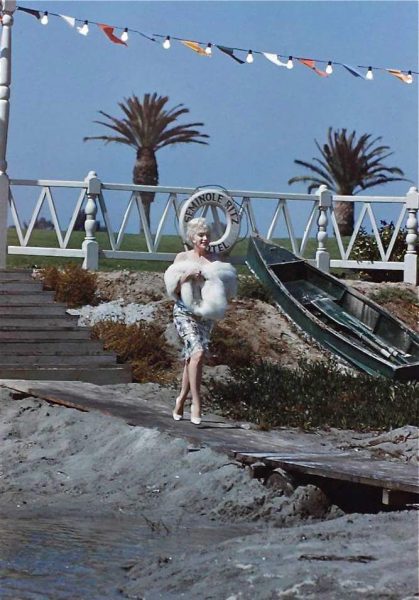 An all-weather, outdoor screening of Some Like It Hot heads up this year’s Rural Life Vintage Revival on Friday, August 31 at the Rural Life Centre in Tilford, near Farnham, Surrey. Tickets cost £10 with an opening time of 7:30 pm, and the film starting at 8:30.

“Where others read detective fiction I read Marilyn Monroe books. Because of their wildly incompatible approaches they have to be taken with a Rashomon attitude. But I have not been diligent recently and thus have missed the best, Gary Vitacco-Robles’s Icon, in two volumes and almost 1600 pages. It is by far the best Marilyn Monroe biography ever …

I should be familiar with the material as my interest now dates back 40 years, but Vitacco-Robles manages to surprise me on each page. There is a lot of new detail, and from his meaningful interpretation a new portrait emerges. Vitacco-Robles’s approach is sober, but his achievement is ‘A Passion of Marilyn Monroe’. He has a sense of the epic in this story, and psychologically he seems to get deeper than anyone else. This book is a hard act to follow.”

Meanwhile, Charles Casillo’s Marilyn Monroe: The Private Life of a Public Icon has been favourably reviewed by Kevin Howell at Shelf Awareness.

“Billy Wilder said Marilyn Monroe was ‘a puzzle without any solution,’ but biographer and novelist Charles Casillo has dug deep …  [he] does an outstanding job of sifting through conflicting testimonies … Monroe’s sad but fascinating life has been told many times before, but Casillo’s sympathetic and psychologically nuanced Marilyn Monroe bio is compulsively readable.”