In the wake of news that over a hundred celebrities’ private photos have been leaked by a hacker, Anne Helen Petersen looks back at Marilyn’s nude calendar scandal, and how she survived, over at Buzzfeed. 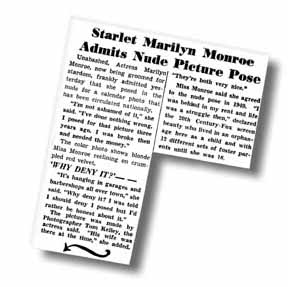 “More than 60 years ago, an ‘it’ girl not dissimilar to Jennifer Lawrence also had highly suggestive and topless photos emerge into the public sphere, just as her career was rocketing from B-player to A-list star. A 23-year-old Marilyn Monroe, desperate for work, posed nude for art photographer Tom Kelley in 1949, receiving $50 for her time.

She made rent, and continued her fledgling career. It wasn’t until 1952, when two of the images from the shoot showed up in a calendar called Golden Dreams, that the photo shoot came back to (potentially) haunt her.

At first, it was mere speculation that the anonymous girl in the pages of the calendar seemed to look strikingly similar to one of Fox’s up-and-coming starlettes. But as it became increasingly clear that it was, in fact, Monroe nude on a bed of red satin, she urged her studio to let her guide her own PR strategy, one brilliant in its simplicity.

Instead of denouncing the images, Monroe took control of the narrative. She’d been hungry and behind on rent, and besides, she had always insisted that the photographer’s wife be in the room. ‘I’m not ashamed of it,’ she told the press. ‘I’ve done nothing wrong.’

And her comments just kept getting better. ‘I’ve only autographed a few copies of it, mostly for sick people,’ she explained to the The Saturday Evening Post. ‘On one I wrote, this might not be my best angle.’

Unlike prior sex scandals, which had each served as a revelation of a hidden self, the photos of a naked Monroe fit with the expectations gleaned from her on-screen performances. (Just four years before, a leading Hollywood star — Ingrid Bergman — had been denounced on the Senate floor as an ‘instrument of evil’ for giving birth out of wedlock, with nary a single nude photo in sight.) Monroe’s on-screen persona, or ‘picture personality,’ was defined by sex; it was no surprise when her off-screen activities were as well.

But Monroe’s particular embodiment of sex, and the salience thereof, hinged on an understanding of sex not as prurient, or deviant, but natural — fitting with what came to be known as the “Playboy philosophy”, that sex is only dirty when suppressed. In this way, Monroe reassured the public that posing for those photos wasn’t wrong, or sinful, or something that should end her career — but a young, hungry, ambitious girl understanding her assets and sharing the pleasure of her beautiful body.

Monroe knew that she could fold the potential scandal of the Golden Dreams photos into her existing image, which managed to reconcile the intensely sexual with the overwhelmingly innocent. She giggled, she smiled, she completely neutralized the career-destroying power of those photos. All with a few lines of well-chosen response, calculated to help her audience understand that yes, nude photos might be the site of truth of the Marilyn Monroe image, but that site of truth isn’t cobwebbed and unseemly, but rather the most innocent, natural, and thus unimpeachable form of bliss.”