“‘It’s going to be a very sad day not only for Palm Springs residents but for the entire Coachella Valley,’ said Aftab Dada, general manager of the Hilton Palm Springs and chairman of P.S. Resorts, a group of hotels that brought the statue to town nearly two years ago.

A going-away party, open to the public, is planned for March 27. Details are still being hashed out.

Dada said there is a possibility the city can bring Monroe back after redevelopment of Desert Fashion Plaza is completed. A new hotel and shops are planned on the corner where the statue now stands. He said there are no plans to install another statue in the interim.

The Forever Marilyn statue, on loan from The Sculpture Foundation, will be transported to Hamilton, N.J., where it will be part of an exhibit honoring its designer, Seward Johnson.

Dada said a big reason for the statue’s success was the location — in the heart of downtown, with the San Jacinto Mountains as a backdrop.

‘The setting we have will be impossible to duplicate,’ Dada said.”

The Smithsonian magazine has reported the findings of a new scientific survey, investigating why the personal property of celebrities is so highly coveted.

“Their new study, published today in the Proceedings of the National Academy of Sciences, showed that people at memorabilia auctions were willing to pay much more for items owned by John F. Kennedy or Marilyn Monroe if they thought the beloved celebrities had touched them, but preferred to pay less than the object’s value for items owned by widely disliked individuals (such as Bernie Madoff) if they imagined he’d come into contact with them.

It’s almost as if, the psychologists argue, these buyers believe in some sort of inexplicable mechanism that carries JFK’s and Monroe’s magnificent qualities—as well as Madoff’s reprehensible ones—into these objects simply through touch. Their word for this nonsensical belief that’s as inaccurate as the long-outdated miasma theory of disease? Contagion.

‘Contagion is a form of magical thinking in which people believe that a person’s immaterial qualities or essence can be transferred to an object through physical contact,’ they write. Their findings, they add, ‘suggest that magical thinking may still have effects in contemporary Western societies.’

They carried out the study by looking at data sets of the prices fetched at auction by 1,297 JFK-related, 288 Monroe-related and 489 Madoff-related items—including furniture, jewelry, books and tableware—in recent years. Auction houses generally don’t specify (or know) if an item was actually touched by its owner, so the researchers asked three study participants (who were blind to their hypothesis) to rate how much contact they perceived each of the items would have had with their owners on a scale of one to eight.

The idea is that buyers would likely make a similar judgment on the likelihood of contact: a wall decoration, for instance, would be less likely to have been touched by JFK, whereas a fork would probably have been handled by him frequently.

In addition to the real-world auction data, Newman and Bloom conducted an intriguing experiment that supports their argument about the role of physical contact in the price discrepancies. They gathered 435 volunteers and asked them how much they’d bid on a hypothetical sweater, telling some it had belonged to a famous person they admired, and others that it had been a celebrity they despised.

But they also told some of the participants that the sweater had been transformed in one of three ways: It’d been professionally sterilized (thereby, in theory, destroying the ‘essence’ that the celebrity had left on it but not destroying the actual object), it’d been moved to the auction house (which, theoretically, could contaminate this ‘essence’ with the touch of mere goods handlers) or it came with a condition that it could never be sold again (which would eliminate the monetary value from the participants’ estimation of its worth, isolating their valuation of the sweater itself).

Compared to untransformed sweaters, the participants were willing to pay 14.5 percent less for a beloved celebrity’s sweater (say, Marilyn Monroe’s) that had been sterilized, but just 8.9 percent less for one they couldn’t resell—indicating that they valued whatever ‘essence’ the celebrity had passed on to the sweater by touching it more than its actual monetary value, and that this ‘essence’ could be destroyed by sterilization. The sweater simply being handled by others in transit, however, barely affected their valuation: It seems that celebrity contact can’t be so easily wiped away.”

“I didn’t know Montgomery Clift but when I was a young movie magazine editor for something called Modern Screen I often begged the editor-in-chief to write about him. I knew he was talented. But the editors stuck with Tony Curtis.

I went on to know more about Clift because my straight brother, Bobby, worked as a waiter in a gay cafe on Christopher Street. He often served Clift and always told me after about how unhappy he seemed. “He gave big tips!” said Bobby, who even then had a live-and-let-live attitude.

I finally saw Montgomery Clift in person, with Marilyn Monroe, at the New York premiere of The Misfits. They sat right in front of me, enjoying each other like real friends. I was mostly stunned by how gorgeous she looked in a black fox fur. It was a privilege to see them even once.

As you know, Elizabeth Taylor, too, loved Monty and took a lot of care of him through their experiences on A Place in The Sun, Raintree County (she saved his life after his terrible car accident) and Suddenly Last Summer. Elizabeth also put up the insurance money for Monty to co-star with her in Reflections In a Golden Eye. But he died just before production began. Marlon Brando, in all his mannered glory, took the role.)

However, after working with Monroe in The Misfits Monty declared, ‘I would rather work with Marilyn than any other actress.'”

Marilyn is featured three times in Vanity Fair‘s annual Hollywood issue: in adverts for Sexy Hair and Chrysler (US edition only); and in this full-page 1959 shot from Philippe Halsman’s ‘Jump’ series, illustrating an article about iconic women in movie history. 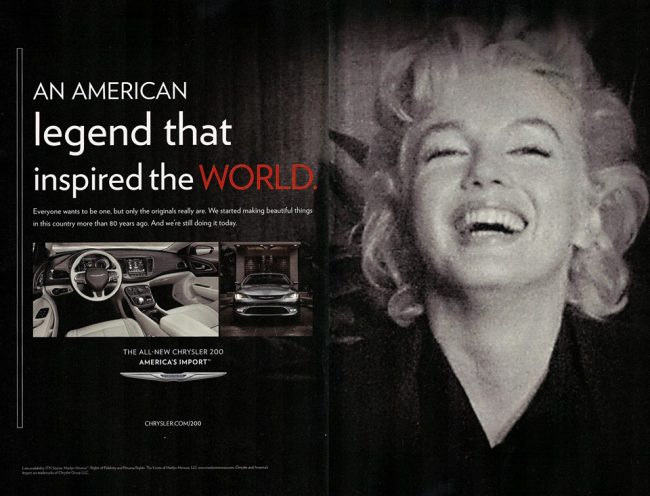 Thanks to Immortal Marilyn member Danny

Over at Mental Floss this week, artist Alison Jackson‘s photograph of two lookalikes impersonating Marilyn Monroe with President John F. Kennedy topped a list of ‘10 Internet Lies That Just Won’t Die.’ Of course, Jackson’s work is not intended to deceive – it’s an artistic interpretation of the fantasies so many of us harbour about the rich and famous. However, many people do believe her photos of Marilyn to be real and cite them as proof of an MM-JFK affair. And many others have since ‘Photoshopped’ Kennedy into photos of Monroe and vice versa, giving no indication that the images are fake. In fact, only two verified photos of the alleged lovers have ever been published, and both show them among the company of others. 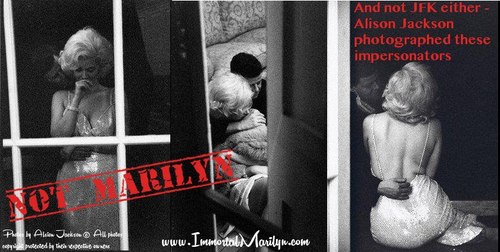 UPDATE: Jackson’s first, and most intriguing image of Marilyn was taken in 1999, with lookalike Suzie Kennedy crossing a Paris street alongside a Princess Diana impersonator, both carrying shopping bags. The image was created just two years after Diana’s death. Part of its charm is that unlike the Kennedy shots, it cannot logically be mistaken for a ‘real’ photo (Diana was born in 1961, just a year before Marilyn died), and is therefore pure fantasy. The picture is included in a new French exhibition focusing on paparazzi photography, reports The Observer. 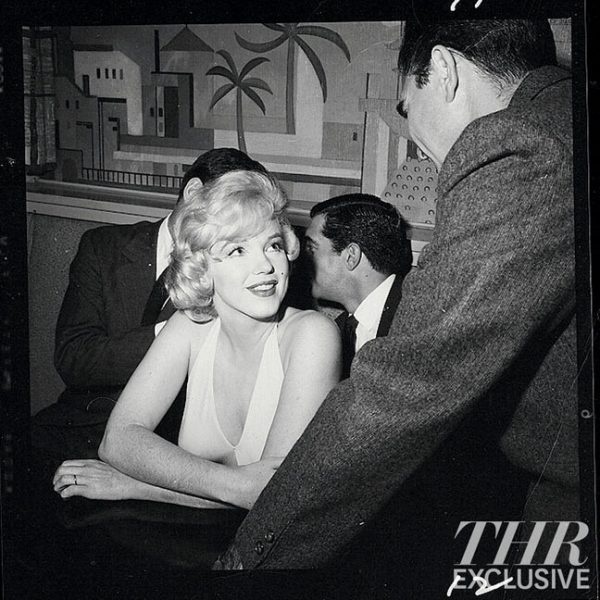 Over at Film School Rejects, Landon Palmer and Scott Beggs discuss what sets Some Like it Hot apart from other ‘gender-swapping’ comedies.

“Scott: There’s definitely a corollary with Tootsie, but it is a bit striking for 1959 (years before Don Draper!) to see the scene where Jack Lemmon gets his intimates squeezed by Bienstock on the bus. It’s a legitimate commentary on opening men’s eyes to a common reality for women — that unironically has a character named Sugar Kane.

Landon: That’s another thing I was struck by in revisiting this movie. I’ve seen other films this past year where Monroe plays a supporting role as a stock dumb blonde, but she really gets to shine here. This may be her most dimensional character.

This past year I read a Mae West biography that talks about the behind-the-scenes world of NYC vaudeville culture in the 1920s, and the book mentions characters like Sugar and the other women in the band: exuberant, confident, hard-drinking, hard-living, and sexually liberated. The movie’s fascinating gender dynamics aren’t just in the high-concept switch, but in it’s general portrayal of young women in contrast to the ’50s housewife.

Scott: Some of that seems muted now — it’s easy to watch the movie and simply see Monroe as an object being hunted, even though she does a lot of work to create a complete character. That’s something we often miss when watching stock romantic comedies. When done right, the woman being courted (tell me I wasn’t a bet!) ends up changing the man because of who she is. There’s something powerful in that. We tend to focus on the character who changes as ‘the hero,’ but stories like this tacitly reinforce that it’s men who, by and large, need to change.

Landon: Yeah, I really appreciate that Some Like It Hot doesn’t follow some of the same beats, especially that Daphne and Josephine never really get found out (the gangsters recognize them more so via the shot-up bass and some forced dialogue). There seemed to me an implication that they could go on passing as women as long as they wanted. They both ‘come out’ to their significant others in the last scene, and neither interprets it as a deception.

But I want to qualify my praise here a bit, because I’m not saying that Some Like It Hot is a radical film (despite our tongue-in-cheek headline), but simply has several rich, interesting aspects and moments that break convention.”

An exhibition featuring photos of Marilyn throughout her career will open on February 25, running until April 5 at the Exhibitions Gallery of Fine Art in Auckland, New Zealand, Scoop reports. Images by Kashio Aoki, George Barris, Bill Carroll, Andre de Dienes, Bob Martin (pictured below), Bert Stern and Laszlo Willinger will be on display. More details here. 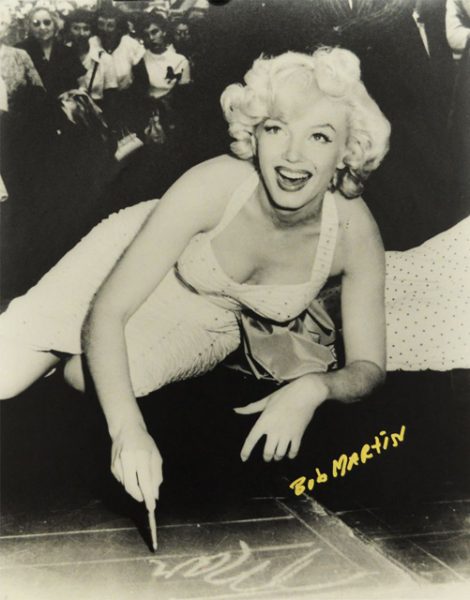 The French fashion designer, Agnès B, has revealed in a video posted by The Awl that she was given a private view of the Christie’s auction of Marilyn’s personal property in 1999. She was touched by the simple elegance of Marilyn’s possessions, a world apart from today’s celebrity culture of ‘bling.’ 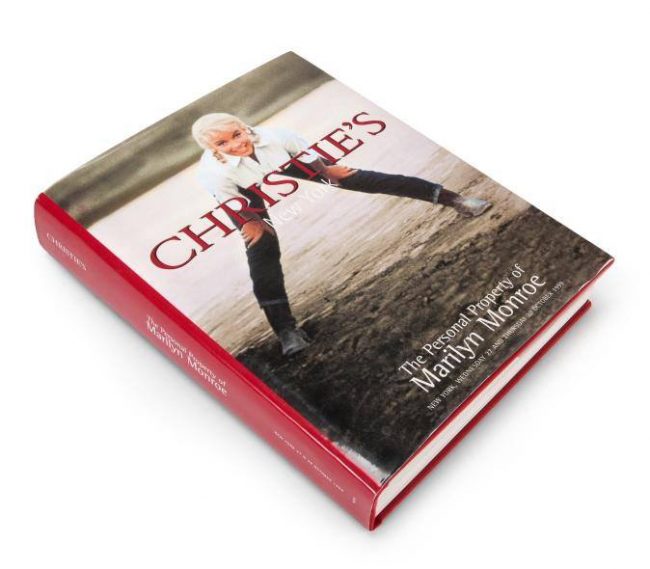