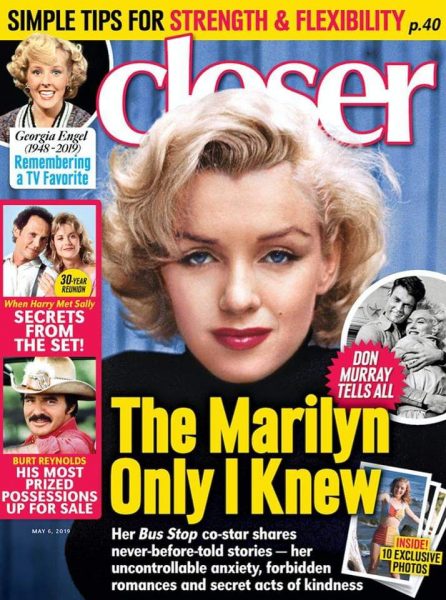 Don Murray, who made his movie debut in Bus Stop (1956), shares memories of his leading lady’s “uncontrollable anxiety, forbidden romances and secret acts of kindness” in a cover story for US magazine Closer.

Now 89, Don had a major role in the acclaimed 2017 revival of TV’s Twin Peaks, and is rumoured to be writing his memoirs. Out now in the US, the May 6 issue of Closer should reach British shores in a week or so (not to be confused with the UK magazine of the same name.)

“‘She was very, very nervous,’ Murray recalled to Closer Weekly in the magazine’s latest issue on newsstands. ‘She’d break out in a rash every time we’d shoot a scene.’

‘Paula would watch and listen and give Marilyn advice between takes,’ said Murray. ‘She was friendly and nice and a very good influence on Marilyn … [But] she would lose track of scenes very quickly, so they had to put her performance together out of small pieces. You never got the feeling of a complete scene or performance. I had to be at my best on every take — I couldn’t have a letdown.’

Despite the on-set struggles, Murray never regretted appearing in his first big film with Monroe.

‘I never really held it against her, because for her to agree to let me play this leading role was such a generous thing; she and I had never done a movie,’ said Murray. ‘I was always aware of that and grateful to her.'”