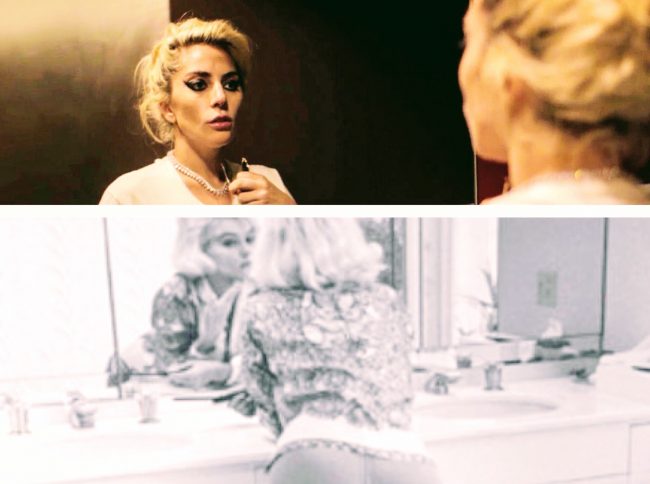 Pop star Lady Gaga has often referenced Marilyn in her work, sometimes with insight and sympathy (as in her past interviews with Vanity Fair and Google, and her ‘Dance in the Dark‘ lyric, ‘Marilyn, Judy, Sylvia/Tell ’em how you feel girls!’) At other times, however, she has depicted MM in a shallow, even crass manner (her ‘Government Hooker‘ song and ‘Do What U Want‘ video.) While she has also experienced the dark side of fame at first hand, her knowledge of Marilyn’s life and character seems rather limited.

Nonetheless, her latest comments about Marilyn – and other stars who died before their time – are quite intriguing, as Olivia Truffaut-Wong reports on the new Netflix documentary, Gaga: Five Foot Two, for Bustle.

“Speaking in her new documentary, Lady Gaga reveals that her wacky fashion choices come out of a desire for control in an industry that loves to take control away from its artists … ‘What I’ve done is that when they wanted me to be sexy or they wanted me to be pop, I always f*cking put some absurd spin on it that made me feel like I’m still in control,’ she says.

In the film, Gaga opens up about how the music industry and Hollywood treats women, particularly how men in positions of power, producers for example, think that female artists are there for their entertainment. ‘That’s not why I’m here. I’m not a receptacle for your pain,’ she says. ‘I’m not just a place for you to put it.’

To counteract those expectations of what a pop star should look like Gaga explains how she decided to show ugliness in fame while performing. ‘If I’m gonna be sexy on the VMAs and sing about the paparazzi,’ she says, ‘I’m gonna do it while I’m bleeding to death and reminding you of what fame did to Marilyn Monroe, the original Norma Jean, and what it did to Anna Nicole Smith.'”