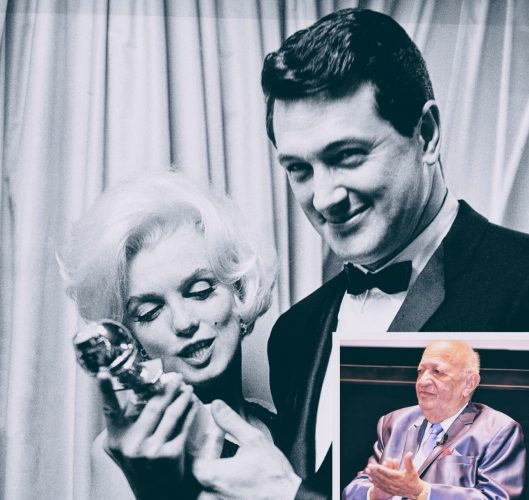 Mahfouz Doss, the Egyptian-American film critic and former president of the Hollywood Foreign Press Association, has recalled meeting Marilyn and Rock Hudson, who presented her with the ‘World Film Favourite’ award at one of her final public appearances, the Golden Globes in February 1962. He shared his memories  – though not his much-prized photo – with actress Jenna Elfman  (best-known for her role in TV’s Dharma and Greg) during a panel discussion at a ceremony to rename part of California State University, Northridge the HFPA Wing, as Broadway World reports.

“‘I remember the event with Marilyn Monroe and Rock Hudson. As a matter of fact, someone took a picture of me. It was me, Marilyn Monroe and Rock Hudson. The three of us together.’ When Elfman asked if he still had the photo, Doss responded, ‘Yes, I still have it. I show it to people from time to time.’ Elfman joked, ‘If you get pulled over by the police, just pull that out.’ As the room erupted with laughter, Doss replied, ‘That’s what I’ll do.'”