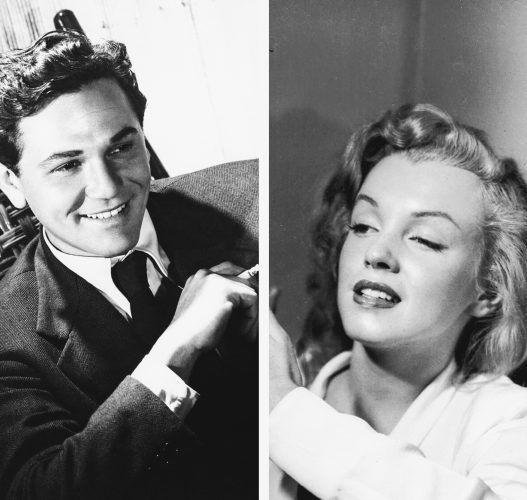 John Garfield, a legendary movie ‘tough guy’ of the 1940s, trained in the New York theatre and after his Hollywood breakthrough, became a prototype for the next generation of ‘rebel actors’ including Marlon Brando. In He Ran All the Way: The Life of John Garfield, biographer Robert Knott describes the star’s alleged encounter with the young Marilyn Monroe on the set of John Huston’s We Were Strangers (1949.)

“[Sam] Spiegel brought agent Johnny Hyde and a young blonde starlet on the set. Spiegel asked Huston to film a silent test of the blonde, using as little film, time and money as possible. Huston said he would, but as soon as the producer left the set Huston asked [Peter] Viertel to write a scene for the girl to play on camera with Julie (Garfield’s real name was Julius.) The next day Huston, cameraman Russell Metty and Julie spent a good part of the day filming this brief screen test with the young blonde, one Marilyn Monroe. Spiegel was furious at Huston’s insubordination and blamed the director for letting the film fall behind schedule another day. Indifferent to Spiegel’s ranting but appreciative of Monroe’s potential, Huston cast her in a small role in his next film, The Asphalt Jungle. (No one seems to know what happened to that test film of Monroe and Garfield; one wonders if the actor made a pass at her.)”