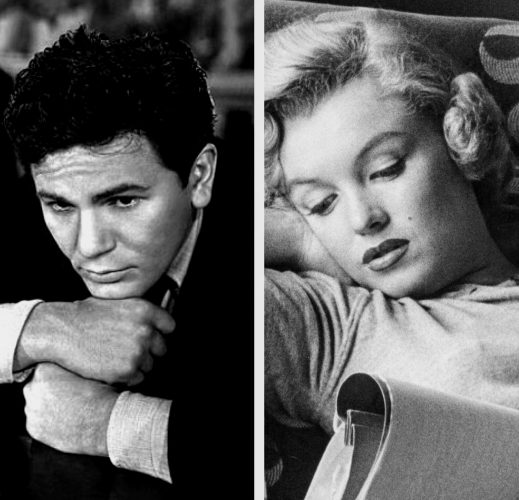 Three years after their encounter on the set of We Were Strangers (see here), Marilyn and John Garfield were early contenders for the lead roles in On the Waterfront, according to Marilyn’s photographer friend, Sam Shaw, who was then developing it as a screenplay. (Director Elia Kazan denied all of this, but Al Ryelander, then a press agent for Columbia Studios, insisted the story was accurate.)

By 1952, Marilyn’s star was rising –  but Garfield’s career was destroyed, after he refused to ‘name names’ to the House Un-American Activities Committee, and became the most famous victim of the ‘red-baiting’ era. He died of a heart attack months later, aged 37. Author Robert Knott retold the story, which also touches on Marilyn’s relationships with Kazan and future husband Arthur Miller, in He Ran All the Way: The Life of John Garfield (2003.)

On the Waterfront was released to acclaim in 1954, starring Marlon Brando and Eva Marie Saint. Ironically, the film can be seen as director Elia Kazan’s self-justification for his own decision to name names. One can only imagine how different Marilyn’s subsequent career might have been had she played the role of demure Edie Doyle…

“Shaw gave Monroe the script while she was in New York to take in the Broadway production of Gentlemen Prefer Blondes. Monroe read the script and passed it on to her lover, Elia Kazan. Shaw, who called himself a ‘half-assed observer at the Actors Studio,’ had met Kazan on the set of the 1950 film Panic in the Streets. ‘Kazan had heard about my script (before Monroe gave it to him) and wanted to see it,’ Shaw said. ‘I wouldn’t give it to him, because he was involved with Arthur Miller on a similar project, The Hook.’ But after Monroe gave Kazan the script, the director called Shaw. ‘You’ve got an interesting script, but it needs a lot of work,’ he told Shaw. ‘Let Budd Schulberg work on it.’ Shaw, seeing the merit in Kazan’s suggestion, raised $40,000 to pay Schulberg to work on the script. According to Shaw, at this point Jack Cohn turned the script over to Sam Spiegel … Within a year Kazan, Spiegel and Schulberg were preparing the film for Columbia Pictures with Marlon Brando … By that point, neither Shaw nor Garfield were involved in any way.”