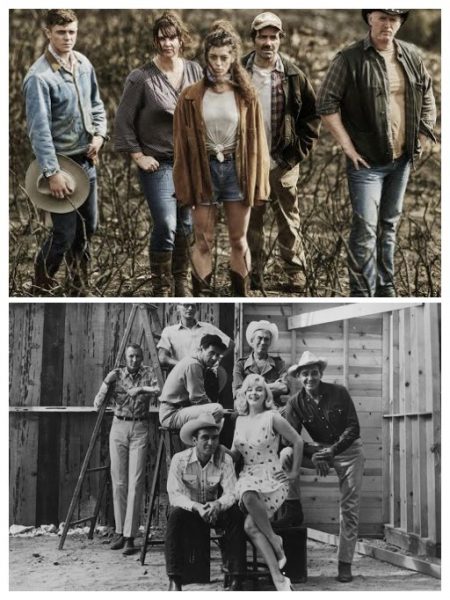 A stage adaptation of The Misfits is set to open at the Dublin Theatre Festival on September 27. Ahead of the premiere, Donald Clarke surveys the production for the Irish Times. As the photos indicate, the cast and crew are not going to replicate the 1961 movie (Aoibhinn McGinnity, who will play Roslyn Tabor, hasn’t seen it.) This is probably a wise decision as the original is so iconic – however, director Annie Ryan has much to say about it, and Marilyn’s performance. 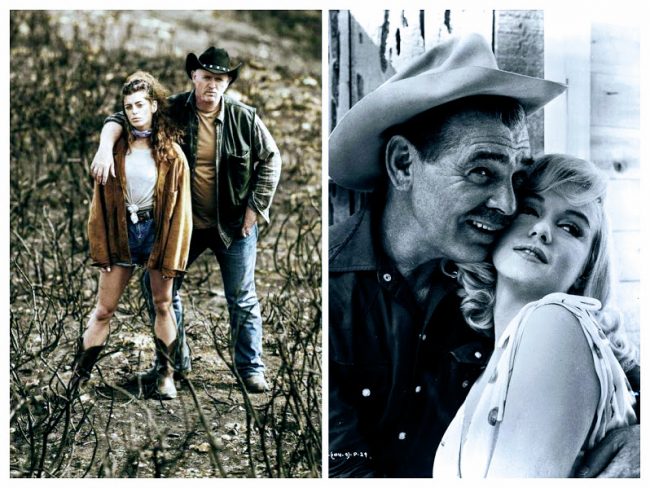 “The picture has an awkward position in film history. It is remembered for a famously disordered production … Most poignantly, the last scene in The Misfits, showing Monroe and Gable sharing the front seat of a truck, stands as a farewell to both those imperishable stars.

Elements of the picture deserve celebration … Monroe really does make something of a dramatic role. Working with Paula Strasberg, one of the era’s great acting coaches, she managed to excise almost all traces of the breathy comic persona that helped her to superstardom.

‘The work in it,’ Ryan sighs. ‘You can really feel Paula Strasberg right behind the camera. She is going for a moment-to-moment method acting truth, but what I see there is the effort in every scene. I watch it thinking: that poor woman. From an acting perspective, it is absolute torture.’

The Misfits is something different. Even before we sit down, Ryan, her Chicagoan accent still largely intact, is giving out about the way Thelma Ritter is underused and about how uncomfortable she is with Miller’s attempts to ‘save’ Marilyn through art.

‘This isn’t a great film. It’s a really flawed film,’ she says. ‘I came upon it because it’s in his collected plays. My impulse came before the 2016 election. There isn’t a strong narrative, but there could be something to it. And it only has five people. I can’t afford a bigger cast than that unless I partner with a bigger company. Part of my thinking was: Can this work?’

She mentions the 2016 US presidential election. Obviously, all American art is now about Donald Trump. You can’t get away from him. The Misfits finds Monroe’s Roslyn, in Reno for a divorce, meeting three very different, but equally damaged, hunks of cowboy masculinity and then following them as they hunt mustangs in the nearby desert. Over 50 years ago, these characters were already complaining that the world had passed them by.

‘I suspect 60 or 70 per cent of those going in won’t have seen the film,’ Ryan says. ‘But they’ll know the iconography. They’ll have seen the photographs. Everyone knows about The Misfits even if they haven’t seen it. The image of the expanse. The image of Marilyn in the hat and the shirt. They are famous images. You have to accept they are in the room.’

It helps that Ryan is not working from the original script. Her production of The Misfits is officially an adaptation of a novella that Miller published to tie in with the release of the film.

‘I think Miller did [Marilyn] a disservice by writing a version of herself,’ Ryan says. ‘He did this as a gift. But there’s no mask. She has an innocence. She has a compassion for all living things, which comes from Marilyn. She has an incredibly dysfunctional family background, which comes from Marilyn. Men are falling over each other to be next to her. There is a lot of language in the text about “the golden girl” arriving. No actor can play themselves. Most actors can’t face speaking in public, They just can’t bear it.’

Echoes of the #MeToo movement creep into The Misfits. The production will have much to do with how men interact with (and sometimes ignore) women in social engagements. Marilyn Monroe suffered more from those abuses than most. You see it in her films. You read about it in her life.

‘We see how she has become expert at saying “no” in a really nice way,’ Ryan says of Roslyn. ‘We have all been there to some degree. What would it be like to imagine that character now without sexing her up?’

Some reclaiming and revaluating is in order.

‘I feel that we are doing this for Marilyn’s ghost in some way.'”