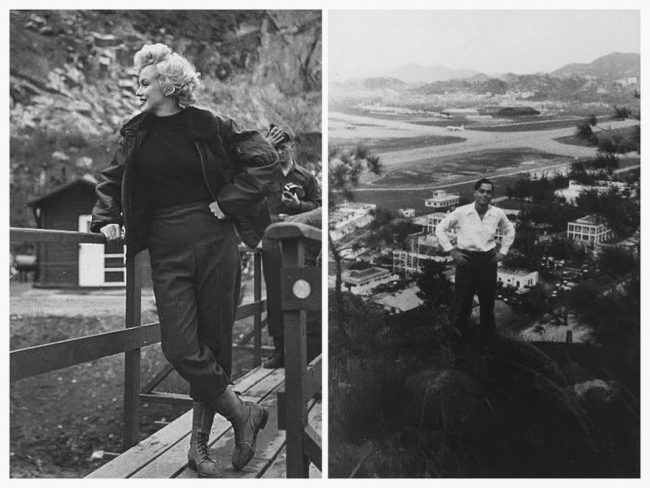 Today’s obituary page in the Daily Mail includes an interesting anecdote from Timothy Goss, son-in-law of Derek Bishop who died recently, aged 85. Apparently, Derek met Marilyn at the former Kai Tak airport in Hong Kong one freezing night, while on guard duty as part of his national service in the British Royal Air Force.

Although the story is dated as from 1952, Marilyn didn’t travel to the Far East until 1954. National service usually lasted for 1 year, sometimes more. And I haven’t heard of her visiting Hong Kong before, but it’s possible she passed through while returning to husband Joe DiMaggio in Japan after entertaining US troops in Korea.

However, as April VeVea points out over at Marilyn Remembered, “That seems really far out of the way when Hong Kong is roughly 2000 miles [from South Korea] and Kobe, Japan is 800.” So did Derek really meet Marilyn, or another blonde starlet that night?

“When his shift came to an end at 9pm, Derek and another solider were asked if they would stay on because a delayed flight was expected and there was a ‘celebrity’ on board.

They agreed and when the plane landed at 11pm, the famous passenger who stepped out was none other than the woman who would become the ultimate screen goddess.

Derek said she was dressed in ‘everyday’ clothes and wore very little make-up. She insisted on thanking him and his pal personally for working late and took them for a drink in the Nissen Hut that served as the mess.

He had half a lager and his only comment was that ‘she had no side to her.'”