After 36 years in business, a Marilyn-themed restaurant in Ontario, Canada is taking its final bow, as the Owen Sound Sun Times reports.

“Owner Julia Gendron said she had been considering an exit strategy from the restaurant industry for the past few years, but those plans were accelerated by the COVID-19 pandemic.

Gendron, who most people know as Julie, started working at the restaurant that same year and became a partner around 1990.

It was a last-minute decision to name the restaurant Norma Jean’s – the given name of Marilyn Monroe – and was chosen because Gnaedig’s wife was a fan of the iconic actress.
The restaurant was decorated with photographs of Monroe and its menu also featured images of the actress, with sections on the bill of fare like Opening Acts and Red Carpet Favourites.

Gendron, in a letter to patrons that announces the restaurant’s closing, said some of the best times at Norma Jean’s included the rowdy New Year’s Eve parties, intimate family get-togethers and music nights ‘that would shake the windows.'”

A real estate brochure for Marilyn’s last home at Fifth Helena Drive – which sold for $7.25 million in 2017 – fetched $5,120 yesterday during an online sale marking Marilyn’s 94th birthday at Julien’s Auctions.

The highest final bid, however, went to this signed portrait by Richard Avedon ($8,960.)

This photo from an iconic 1952 shoot is signed by Gene Kornman, one of two photographers present at the session (alongside Frank Powolny), and sold for $6,400.

This signed lithograph, made from a photo taken during Marilyn’s so-called ‘Last Sitting’ with Bert Stern in June 1962, sold for $2,880; and an image from her final photo session at Santa Monica Beach in July, signed by photographer George Barris, sold for $2,560.

… and a shot credited to Bruno Bernard (aka Bernard of Hollywood) from Marilyn’s unforgettable subway scene in The Seven Year Itch, signed by Bernard’s daughter and archivist Susan.

In 2017, Playboy founder Hugh Hefner was buried in the vault next to Marilyn’s at Westwood Memorial Park. Now an adjacent space is being offered for $475,000, as Steve Lopez reports for the Los Angeles Times. (The photo shows Marsha Ebert, whose parents are also buried in a less expensive plot at Westwood, guiding Lopez to Marilyn’s final resting place. In keeping with these difficult times, Marsha removed her face-mask only when the photo was taken.)

“‘Be buried adjacent to Marilyn Monroe and Hugh Hefner,’ said an ad that ran in the L.A. Times a couple of weeks ago. ‘The last prominent bench estate location in Westwood Village Memorial Park. Accommodates four people.’

I called the number in the advertisement and a gent named John Thill answered the phone in Florida, where he now lives. Thill, 66, writes textbooks in the business field. He told me he has lived in Los Angeles and San Diego, and that one of his favorite Marilyn Monroe movies was Some Like It Hot, which was filmed at the Hotel Del Coronado in San Diego.

Now that Thill’s in Florida, he told me, the plot lost some of its appeal. He first listed it last year at $790,000 and then dropped the price recently. He’s gotten several nibbles, and said he stands to make ‘a little money’ if he can sell near the list price.”

With many of us still in lockdown, Vogue looks to Marilyn today for inspiration on staying glam at home. This photo was taken during a press conference at the Beverly Glen house rented by Marilyn during filming of Bus Stop (1956.) She lived at more than forty addresses in her thirty-six years, including numerous apartments and hotel suites (see here.)

Not all of these pictures were actually shot at home, though. The photos of Marilyn applying makeup were taken at Columbia Studios, where she filmed Ladies of the Chorus in 1948; and the image of her standing by a window – incorrectly dated as 1955 – was actually in the office of Jerry Wald, producer of Clash By Night (1952.)

This year’s Cannes Film Festival has been postponed, the Deccan Herald reports – as this famous mural of Marilyn, painted onto the Cannes Riviera Hotel, watches over an empty Boulevard D’Alsace (learn more about the city’s movie-inspired murals here.) 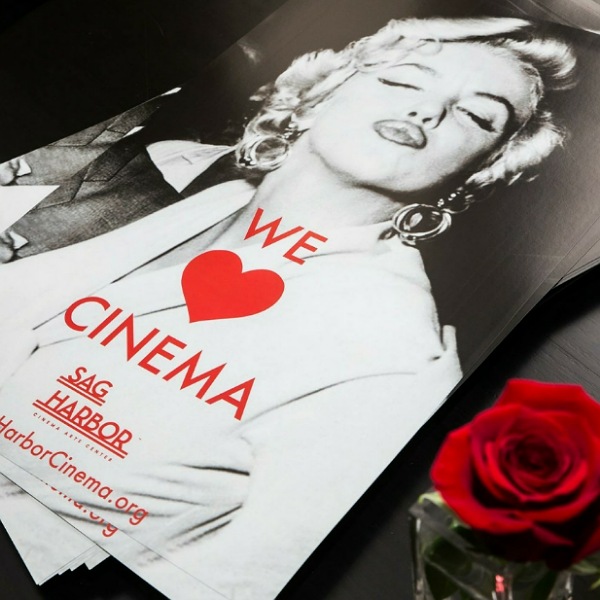 The Sag Harbor Cinema on Long Island was due to reopen this month, after a four-year closure and extensive renovation following a 2016 fire. With New York now suffering some of the highest rates of casualties in the world from coronavirus, that reopening has been delayed. However, the venue is now operating a virtual cinema (along with 200 independent theatres across the U.S.)

While no Monroe movies are currently screening at Sag Harbor, fashion photographer Steven Klein posted the above snapshot to Instagram yesterday, with Marilyn blowing kisses to passers by. The poster was created for a promotional event on St. Valentine’s Day, using an iconic image shot by Arthur Fellig aka ‘Weegee’, as Marilyn arrived in New York in September 1954, ready to film location scenes for The Seven Year Itch.

Bill Sluyter Fredendall, who once lived in the Los Angeles Orphans Home alongside Norma Jeane Baker, has died aged 92 in L’Anse, Michigan, according to the Keewanaw Report.

In a 2016 interview with Eden Prairie News, Bill fondly recalled the future star, two years older and a friend of his sister Doris, pushing him on a swing, and the children’s excitement at being so close to the world of film-making. ‘We sat on the radiators and looked at the front of the RKO studio, up in the sky from where we were,’ Bill said. ‘We could see that from the orphanage. We all wanted to be in the movies.’ His daughter Phyllis said that when Bill heard of Marilyn’s death, he was bereft: ‘She was a good girl,’ he said.

Marilyn was a resident from 1935-37, from the age of nine to just after her eleventh birthday. She was treated well there, but like many children displaced during the Great Depression, struggled with feelings of abandonment throughout her stay. The home, on El Centro Avenue, was renamed as Hollygrove in 1957. After closing in 2005, it now operates an outreach service for vulnerable children and their families.

“Bill and his brother Dick and sister Doris were placed in the Los Angeles Orphans Home in Hollywood in 1934. His stories from that time are legion. It was the favorite charity of many of the movie stars as it was across the street from RKO Studios. Oliver Hardy’s sister was one of the matrons. Bill remembered Laurel and Hardy arriving in a big convertible full of presents. The campus of the orphanage was sometimes used as a movie set – he recalled the filming of a fire rescue from a second story window. And of course he remembered one of the girls, Norma Jeane Baker (Marilyn Monroe) who was there at the same time.

Bill was an avid reader and a movie buff. He loved to drive and took many trips with family and friends. He enjoyed golfing, sailing, skiing, and swimming in Lake Superior, Minnesota. Music was a lifelong friend. He played harmonicas large and small, having learned to play while in the Orphan Home.”