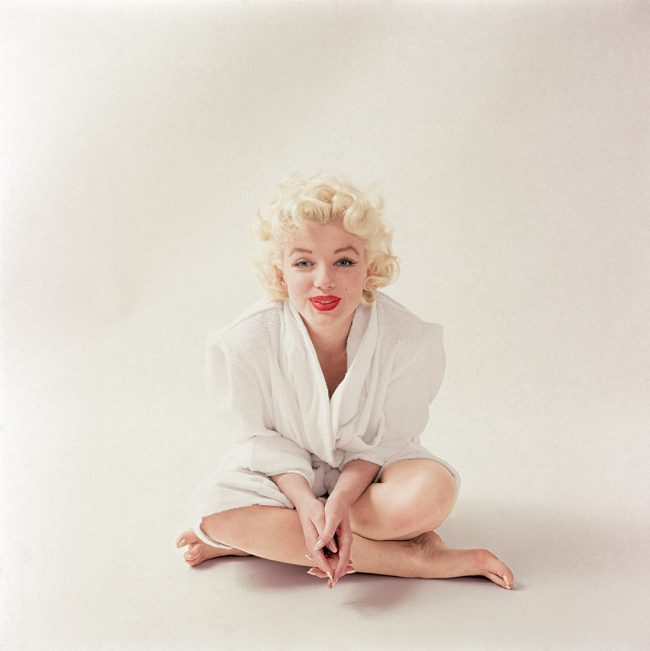 In a new interview for the Hello Giggles website, Joshua and Amy Greene talk about Marilyn and their spectacular book, 50 Sessions: The Essential MM By Milton Greene.

“On meeting Marilyn for the first time at Gene Kelly’s house:

AG: So, I also have to tell you that very few people in Hollywood had ever seen Marilyn because she was almost a recluse. She got up, she went to work, and she came back. So Milton said, ‘I’m gonna get Marilyn’ and come back to Gene’s house, [and] that’s where I met her. She came walking in. She was wearing a big Polo coat and no makeup. Her hair looked good. I sort of waved at her and she waved at me. The first break, I went over to her and she threw her arms around me and said, I’m delighted to meet you, and I kissed her. It was lovely because we became girlfriends.

On finding out about Marilyn’s death:

AG: We were in France, in Paris. Milton was doing the collections for Life magazine, and there was a radio. I kept saying, ‘Well let’s try to get some music or something.’ All we got was news, news, news, and neither one of us could understand French that well. All of a sudden, the words Marilyn Monroe came on. We didn’t know what it was. So, we went to [Château de] Fontainebleau, had a wonderful picnic lunch, drove back to Paris, and the first thing we heard—the telephone was ringing off the wall. It was Arthur Jacobs, who was her publicist trying to get us all day. And he said Marilyn’s dead. […] I collapsed. Milton was staggering. That was the last thing we expected.

On the subconscious feminism of Marilyn and Marilyn Monroe Productions:

JG: When you look at the history of what she was up against, what she did—she knew exactly what she was doing with men, and she knew exactly what she wanted to do for herself. With the right help [and] the right people, she was able to change and break the chain, break the glass ceiling, for someone with essentially no power and no money in the ‘50s as a woman. You gotta look at it through those rose-colored glasses. There’s movements that were created based on her life path—things that she wasn’t necessarily doing for that reason—she was just fighting for her freedom.”