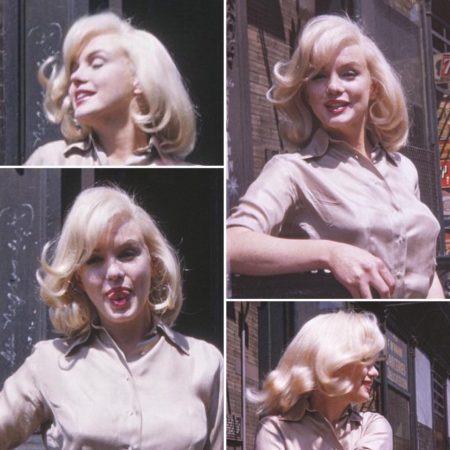 A series of gorgeous colour photos taken by Monroe Sixer Frieda Hull, whose incredible archive of candid snapshots were auctioned at Julien’s in November 2016, were published in yesterday’s Daily Mail. The images show Marilyn arriving for test shots for The Misfits in New York in July 1960.

Unfortunately – and all too predictably – the pictures are accompanied by a salacious and frankly unbelievable story. Marilyn’s belly is rather prominent in the photos, and Tony Michaels – a Las Vegas casino croupier who befriended the late Frieda Hull, and purchased the images at auction – claims that Marilyn was secretly pregnant at the time, by her Let’s Make Love co-star Yves Montand.

That Marilyn and Yves had an affair is not in doubt, and of course they were both married to other people. However, a pregnancy at this time has never been mentioned, and Marilyn’s daily routine is extremely well-documented. To casual observers her protruding tummy may look like a baby bump, but seasoned fans have noticed many similar images of her over the years.

Furthermore, Marilyn was a very private person and it would be out of character for her to have confided in a teenage fan. Frieda Hull never sought publicity and it seems all too convenient that such a story would emerge only after her death. It has also been debunked by Scott Fortner, who helped to catalogue the recent Julien’s sale in which these photos were featured, on his MM Collection blog; and by Immortal Marilyn.

Could this be an early frontrunner for the most ridiculous Marilyn headline of 2017? It is interesting to note that the Daily Mail was recently blacklisted by Wikipedia for ‘poor fact checking, sensationalism and flat-out fabrication.’