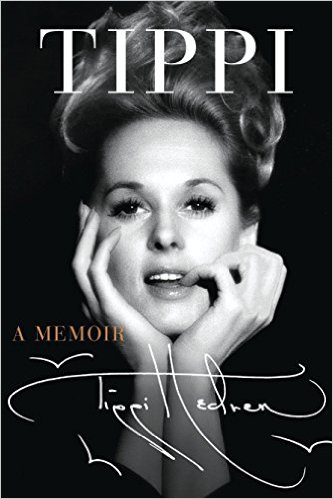 Actress Tippi Hedren is best-known for her roles in Alfred Hitchcock’s Marnie and The Birds. In her new autobiography, Tippi: A Memoir, she recalls an ‘almost meeting’ with a rather subdued Marilyn at Milton Greene’s home in the mid-1950s. (Immortal Marilyn member Kylie Christine has also written an article about Tippi for the Marilyn’s Contemporaries series.)

“They invited me to their home in Connecticut for several weekend gatherings, and on one particular weekend Marilyn Monroe happened to be staying with them. I’m still trying to figure out whether or not I can say I met her.

It was a Sunday afternoon, and hours passed before Marilyn emerged from her suite on the second floor. I looked up to see her descending the stairs, presumably to come down and join the group.

Instead, she stopped on the landing, where she sat down in the corner and stayed there.

Seriously, she never said a word, she just sat there on that landing with a rather blank, unwelcoming look on her face. I never saw anyone approach her, and I kind of lost track of her. Later I noticed she’d just disappeared, perhaps back to her room or who knows where.

I have no idea what was going on with her. I wrote it off to terrible shyness or insecurity and left it at that. Milton and Amy didn’t seem to think a thing about it, and I wasn’t about to ask them. It was none of my business, and frankly, I wasn’t that interested.

So that was the perfectly lovely Sunday afternoon in Connecticut when I either did or didn’t meet Marilyn Monroe.