The Jung Center in Houston, Texas is a non-profit educational institute, named after Carl Jung and dedicated to the arts, psychology and spirituality. A new exhibition, ‘The Inner Marilyn‘, has just opened and will be on display until June 2.

The items featured are from the collection of Marie Taylor Bosarge, who produced and starred in the 2011 musical, Babydoll Reflects, and is president of the Music Doing Good foundation.

Associated events include ‘The Wounded Feminine’, a lecture and workshop led by psychoanalyst Sharon Martin, and a musical celebration of Marilyn’s life. This compassionate, humane approach sounds very promising.

However, I do have a few concerns – firstly, a chair said to be from Marilyn’s home comes with a letter of authentication by Robert Slatzer, who many consider a fraud (see here.) The chair may well be Marilyn’s, but I think a second opinion is needed. 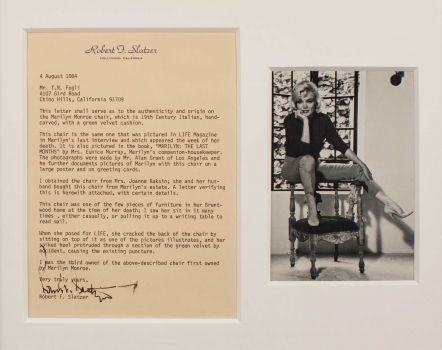 Also, in an interview with the Houston Chronicle, the Jung Center’s Jerry Ruhl seems to imply that Marilyn may have had up to 13 abortions. This is an uncorroborated rumour propagated by Norman Mailer in his ‘factoid’ biography, Marilyn (1973.) In fact, Marilyn suffered from endometriosis which made her unable to carry pregnancies to term.

“There is no proof of it through medical records and stuff like that though, because abortions were illegal and so no records would have been kept,” Danamo notes on the long-standing MM Pages website. “However, to have that many ‘back-alley’ abortions would have surely messed Marilyn up gynecologically, but her autopsy report doesn’t report any abnormalities of this nature.”