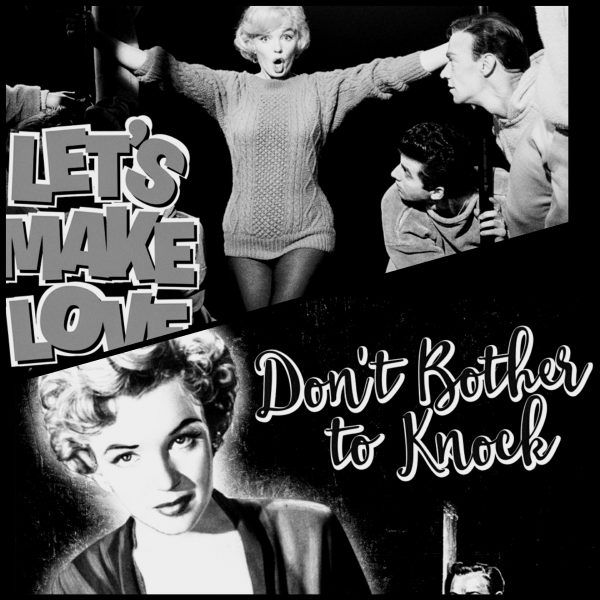 The recent Blu-Ray releases of Don’t Bother to Knock and Let’s Make Love from Twilight Time Video are reviewed by David Krauss for Hi-Def Digest.

“Don’t Bother to Knock offers the 26-year-old Monroe an especially rigorous dramatic workout as an emotionally disturbed young woman whose inner demons come to the fore while she’s babysitting a six-year-old girl in a New York City hotel … Despite her limited acting experience, Monroe tackles the tricky role well, juggling naïveté, passion, rage, and emotional distress with surprising aplomb. She also displays a heartbreaking vulnerability that makes us feel for Nell’s predicament despite her shocking and reprehensible actions. Though still rough around the edges and a bit studied, Marilyn’s work has a disarming authenticity, especially in her emotional scene … Don’t Bother to Knock, which runs a brief 76 minutes, begins sluggishly and the tale isn’t particularly well developed. Still, this throwaway B movie flaunts an impressive pedigree. Director Roy Baker, who would later helm the classic Titanic docudrama A Night to Remember, nicely builds tension, while cinematographer Lucien Ballard (The Wild Bunch) beautifully photographs Marilyn, maximizing the impact of every close-up.

Let’s Make Love is a pleasant, innocuous diversion, but it lacks the effervescence of more spirited romantic comedies. Though peppered by a few pointed barbs, Norman Krasna’s script meanders along, and the direction by the esteemed George Cukor is anemic at best …The only reason Monroe consented to do this inferior film was because she was desperate to fulfill her contractual obligations to Fox, which never really respected her talent and often saddled her with vapid, ornamental roles designed to exploit her sexuality. Yet despite looking a tad zaftig and occasionally glazed here, Marilyn does her best to rise to the occasion. She handles her free-spirited part like a pro, exuding marvelous warmth, sensitivity, and some welcome spunk. She’s at her best in a couple of lively musical numbers, the finest of which is her dynamite opening salvo, a coyly sexy, tongue-in-cheek take on Cole Porter’s ‘My Heart Belongs to Daddy’ that stands as one of Marilyn’s finest screen moments.”