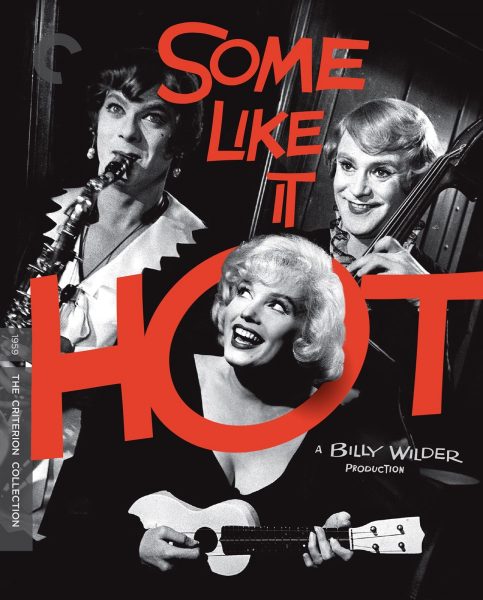 If you haven’t seen the new 4K restoration of Some Like It Hot on the big screen, there’s good news: it’s now available on DVD and Blu-Ray from the Criterion Collection, and with lots of extras too. Sam Wasson wrote ‘Some Like It Hot: How to Have Fun,’ an essay for the special edition, and while I don’t agree with him entirely (I believe Marilyn was a great artist), it’s an insightful piece. “I think it is way past time we celebrated Wilder for his women,” Wasson writes. “Look at the women. They’re Wilder’s heart.” 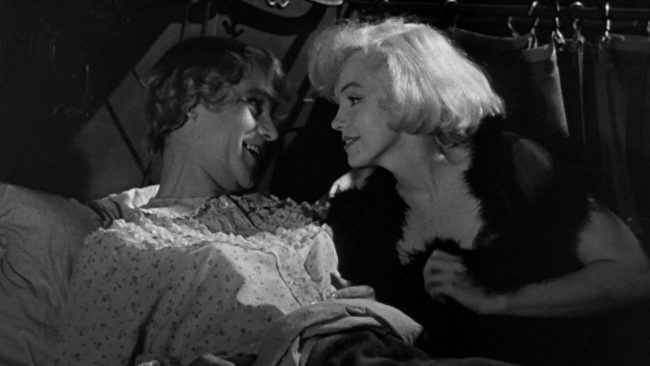 “More than any other director ever had or ever would, Wilder got Monroe inside and out, what she could do well and what she couldn’t. ‘The charm of her is two left feet,’ he said. ‘Otherwise she may become a slightly inferior Eva Marie Saint.’ Others had made the mistake of taking Monroe for an actress of real range; she wasn’t. Some took her only at face value, but she was, as we all know, something deeper than merely beautiful. Wilder split the difference. He understood that for all her sadness—which Some Like It Hot calls for—Marilyn the performer was a light comedian. Marilyn the woman was a girl …This wholesome innocence, coupled with that figure that suggests not-so-innocent things, let her have her cake and eat it too; it was the paradox that made her a star. ‘How do I know about a man’s needs for a sex symbol?’ she once asked. ‘I’m a girl.’

We know Marilyn is hot, but Wilder saw that she was warm too, and in Some Like It Hot, he permits her coziness to cuddle some clemency into his ruthless good time. She is the heart of the comedy, the only one not playing for laughs (though she gets them), and if you, like me, think she walks away with the picture, it’s because Wilder handed it to her. Rarely does Lemmon or Curtis have the screen to himself; Monroe often does. Her close-ups—a rare occurrence in Wilder country—reveal a girl twinkling with chaste enthusiasms. ‘Good niiiiiight, Sugaarrrr,’ Jerry stage-whispers to her across the train car. She pops her head out of her bunk, and after a vulnerable split second wondering who called to her, she opens into the most playful, the most self-nourished, the most sincere smile I’ve ever seen in a movie. It’s not sexy. It’s genuinely happy. ‘Good night, honey!’

And here we are again, back to having a good time. ‘A good time’: not a phrase we readily associate with the famously heartsick Marilyn Monroe. Seeing her so happy must have been fun for Some Like It Hot’s 1959 audiences, but for us, knowing what we know about her depression and self-loathing and death, watching Marilyn truly enjoy herself is, today, the movie’s most painful pleasure. When she calls back, ‘Good night, honey!’ I’m probably not alone in feeling, in addition to delighted, very sad, and not because we lost in Monroe a great artist (she wasn’t), or a great beauty (she was), but because, in Some Like It Hot, it’s clear she was, at times, abundantly capable of enjoying life.”