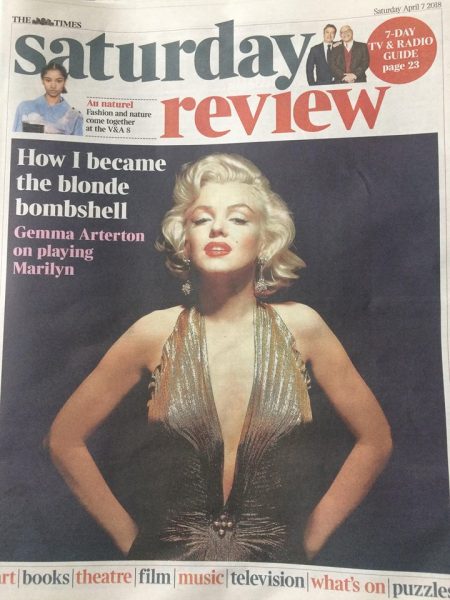 Gemma Arterton has spoken with The Times about her role as Marilyn in It’s Me, Sugar, which opens the new season Sky Arts’ Urban Myths in the UK next Thursday (see trailer here.) While I don’t agree with all of Arterton’s comments – MM was not, as she claims, ‘the epitome of the casting couch’ – she does at least seem genuinely sympathetic to Marilyn’s experiences of harassment and sexism, and sensitive to the factors underlying her ‘difficult’ behaviour. (Interestingly, Arthur Miller is played by Dougray Scott, who took the same role in My Week With Marilyn.) 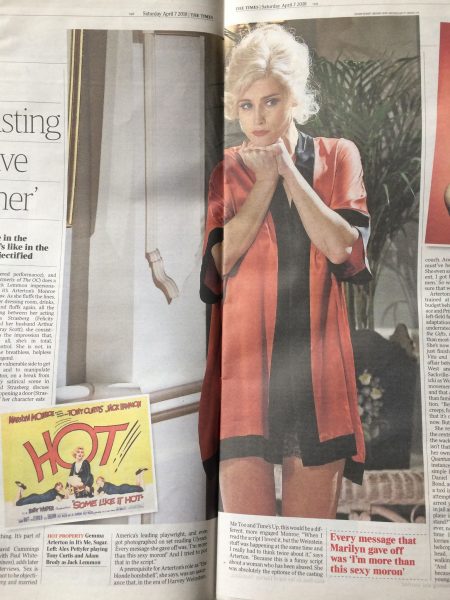 “Gemma Arterton is screaming at the top of her voice. ‘F*** you!’ she roars. We’re alone in an empty changing room in a small production studio 17 miles south of London and the 32-year-old star of Tamara Drewe is tapping into her inner Marilyn Monroe. Almost unrecognisable in platinum-blond wig, blood-red lipstick and marble-white make-up, she is in between takes and casually unleashing her version of the screen legend, a volatile concoction of aching vulnerability mixed with furious hair-trigger passions.

The swearing, for instance, is delivered with jump-out-of-your-seat urgency, in the midst of an explanatory monologue about Monroe’s mid-sentence mood swings. ‘She goes from [whimpering], Oh my God, love me! straight into the opposite,’ says Arterton, before swearing, chuckling and then adding: ‘Everything I’ve read about Marilyn points to how unpredictable she was. She could change just like that. People would be afraid to knock on her door and to ask her to come out on set. Whereas I think most people think of her [adopts archetypal Monroe squeak] like a wet blanket.’

‘Marilyn used her vulnerable side to get what she wanted and to manipulate people,’ says Arterton, on a break from filming a stingingly satirical scene in which Monroe and Strasberg discuss her ‘motivation’ for opening a door (Strasberg asks Monroe if her character eats cheese and Monroe replies: ‘Only on Fridays — she gets paid on Thursdays!’). ‘That was a powerful tool that she had, to make everyone feel sorry for her. But in that power she was in control. There’s a bit in our film where they’re 37 takes in and Wilder says, “Don’t worry about it!” And she says, “Don’t worry about what?” And she actually said that! So she’s very tongue-in-cheek. She knows what she’s doing. But she plays the childlike thing. It’s part of her act.’

The film’s writer, David Cummings (a regular collaborator with Paul Whitehouse on Nurse and Happiness), adds later that ‘Marilyn said in interviews, “Sex is fine, but I don’t actually want to be objectified.” So she hired Paula Strasberg and married America’s leading playwright … Every message she gave off was, “I’m more than this sexy moron!” And I tried to put that in the script.’

Indeed, a prerequisite for Arterton’s role as ‘the blonde bombshell’, she says, was an assurance that, in the era of Harvey Weinstein, Me Too and Time’s Up, this would be a different, more engaged Monroe. ‘When I read the script I loved it, but the Weinstein stuff was happening at the same time and I really had to think twice about it,’ says Arterton. ‘Because this is a funny script about a woman who has been abused … So we talked about it and we made sure that we were all aware of that.’

‘I don’t think that it was fun at times to be inside Marilyn’s head,’ says Arterton …’But at other times it must’ve been great. Joe DiMaggio, her second husband, once said, “It’s a nightmare being married to a lightbulb.” She gave off this glow. Some depressive people are like that. There’s the dark, but also the light. And I hope that’s what we showed.'”