After last month’s tour of Canada, Marilyn’s ‘birthday dress’ is now on display at  Ripley’s in San Francisco throughout August, reports the SF Examiner. While the Kennedy connections may be foremost in some minds, the Fisherman’s Wharf location is more redolent of Marilyn’s marriage to Joe DiMaggio, a humble fisherman’s son who grew up in the city, and bought a restaurant on the Wharf after finding fame in baseball. 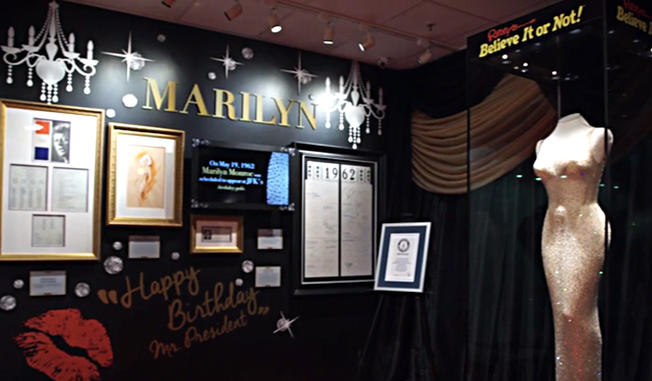 “Ripley’s bought the one-of-a-kind dress designed by Jean Louis from a private collector last year, earning a Guinness World Record for the most expensive dress sold at auction. For the last 17 years, the gown was ‘kept well, but away from the public,’ Meyer said.

The dress, along with the gala’s poster, advertisement and a ticket, will be on display at San Francisco’s Ripley’s at Fisherman Wharf every day from 10 a.m. to 10 p.m. for the next month.

After that, Ripley’s will tour the collection around its 32 locations in 10 countries. The dress will be traveling incognito with at least two guards and in a case designed specifically for it.”