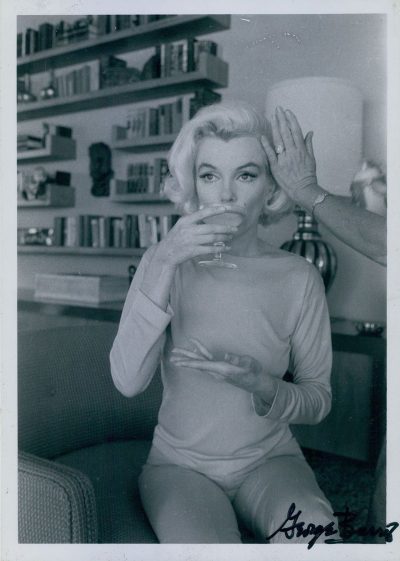 150 photos of Marilyn taken by George Barris in the weeks before she died are the centrepiece of a dedicated auction at Paddle8 in New York, reports Vanity Fair.

“The auction, called Platinum Blonde: Collectible Marilyn, takes place in New York from August 2 to 11, also includes memorabilia—including Monroe’s eighth-grade class photo from Ralph Waldo Emerson Middle School and movie posters from classics like Some Like It Hot and The Seven Year Itch—from the late star, who would have turned 91 this year.

Barris, who originally met with Monroe to do a Cosmopolitan story from the set of Something’s Got To Give, instead became a confidant of sorts in the final weeks of her life. The two began working on a book about Monroe’s life; Barris interviewed her extensively and began to photograph her as well.

In the 1980s, private collector acquired the images from Barris, who died late in 2016. In this auction, these three lots are presented in the original photoboxes from Barris, ranging from 43 to 63 images in each, with estimates from $8000-24,000. The Paddle8 auction, to [Dean] Harmeyer’s knowledge, features the biggest collection of Barris’s work to ever go on sale.”