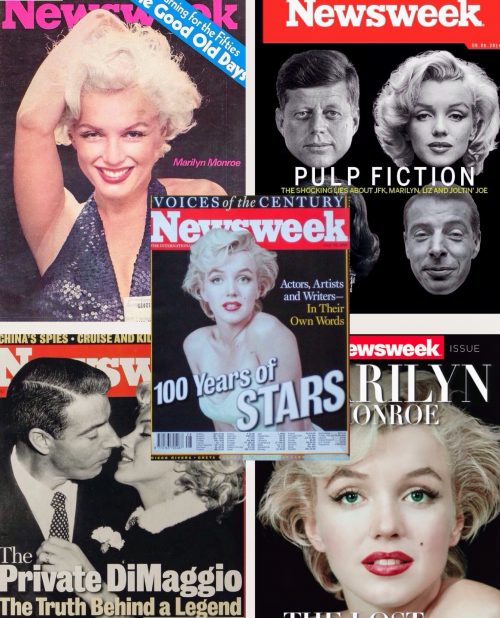 Newsweek has republished two stories dealing with past anniversaries of Marilyn’s death. The first, from 1982, was originally entitled ‘Keeping the Monroe Memories Aglow‘ and focuses on  collectors and fans, some of whom are still active today. ‘The 24-Year Itch‘ dates from 1986, and features contributions from  feminist author Gloria Steinem, and Margaret Parton, one of the last journalists to speak at length with Marilyn.

“Monroe has mostly attracted male biographers. Probably few of them found it remarkable that an intelligent woman would talk like a breathless teenager or play a string of bimbos. Looking at Monroe’s life through the eyes of a contemporary feminist, Steinem now sees Norma Jeane Baker (the real name behind all the imagery) as a girl who never grew up. She was an early bloomer who spent her childhood shunted from one foster home to the next. She remained trapped inside the voluptuous Marilyn, forever seeking the love and approval she had missed as a kid. ‘She was just so vulnerable and unprotected,’ Steinem says.

The effect of social and sexual convention in shaping a tinseltown goddess’s behavior and attitudes is worth remembering. Steinem reminds us that in Monroe’s day a woman so spectacularly sexy was seen by other women primarily as a threat (that, of course, could never happen among the sisterhood today). When Margaret Parton, one of the few women journalists to cover Marilyn during her life, did a profile for the Ladies’ Home Journal, it was killed for being too favorable. Years later, when Ms. magazine ran a cover story on Monroe called ‘The Woman Who Died Too Soon,’ it became one of the magazine’s best-selling issues … In a feminist age, it is easier for women to respond with sympathy to the way Monroe was treated.”