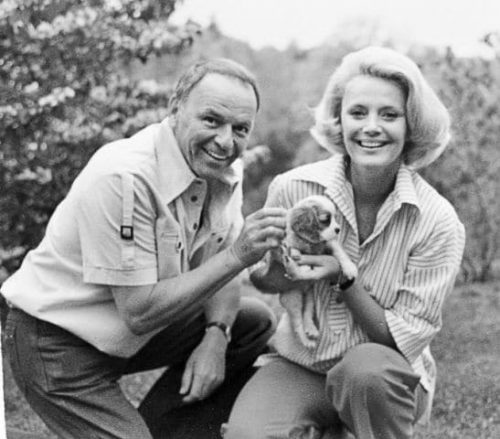 Barbara Marx Sinatra, the widow of Frank Sinatra, has died aged 90. A former model and Las Vegas showgirl, she was married to Zeppo Marx from 1959-73, and to Sinatra from 1976 until his death in 1998. As well as overseeing most of his his estate, Barbara was also a philanthropist and children’s campaigner. In her 2011 memoir, Lady Blue Eyes, she recalled meeting  Marilyn during the 1950s:

“Palm Springs was a celebrity circus where Clark Gable would pop his head over her hedge for a chat. She befriended Janet Leigh and Tony Curtis. She played doubles matches with Bobby Kennedy and met Marilyn Monroe, who visited Sinatra and reportedly liked to walk around his house naked.

Once when Monroe was staying at the Compound, Barbara’s son Bobby, ‘who had the worst crush on Marilyn,’ insisted Barbara secure an invitation so he could meet the star. ‘So I called Dorothy, Frank’s secretary, and told her my problem and Frank called and said have him come over. Bobby met her and he was totally in love.’

On another occasion Barbara met the ‘beautiful and funny’ Monroe, then married to Arthur Miller, at the Palm Springs Racquet Club. ‘I could see why she’d attract the likes of Mr Sinatra, among others. But her dependence on drugs and alcohol left her vulnerable. We had a casual conversation and she seemed sweet, but we were never going to be close. A few years later she was dead.'”