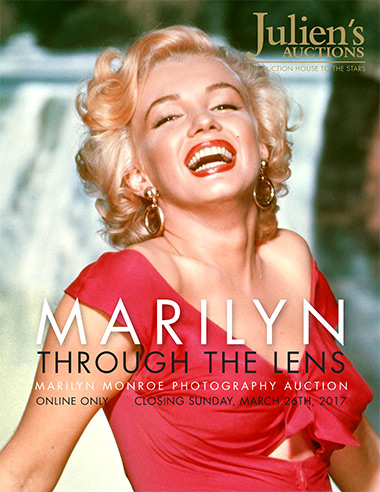 “The sale will feature over 100 Marilyn Monroe photographs by the most significant photographers of the era who captured the pop culture icon, including George Barris, Andre de Dienes, Douglas Kirkland, Milton Greene, Joseph Jasgur, Bruno Bernard, Richard Avedon and more.

Notable portions of the sale include over 25 photographs taken by Douglas Kirkland during the famous ‘Nude In White Silk Sheet’ photoshoot from November 17th, 1961 … The sale also features a collection of over 25 photographs of Marilyn Monroe taken by George Barris just weeks before the legend’s untimely passing.

A selection of photographs from historic appearances, including a group of 8 images sold with copyright from Marilyn’s arrival in Korea to support and perform for the US troops abroad, as well as a Robert H. McKinley photograph of Marilyn addressing the troops from atop an army tank in Korea. Also offered are personal and introspective photographs of Marilyn including Eve Arnold’s image of Marilyn Monroe sitting quietly reading a favorite book under a tree outdoors.”