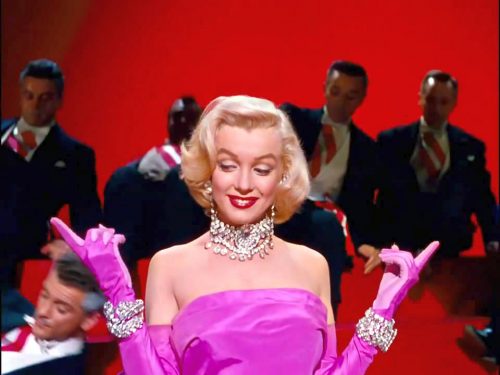 Marilyn’s hilarious performance as the wide-eyed trickster Lorelei Lee in Gentlemen Prefer Blondes is lauded today in ‘100 More Jokes That Shaped Modern Comedy’, a virtual timeline for the Vulture website.

“Dumb-blonde jokes can be traced back as far as the 18th century, but it was Marilyn Monroe’s portrayal of Lorelei Lee that cemented them in modern pop culture. During this big dance number, Monroe’s iconic look, bleached-blonde and adorned in a thick diamond choker with a tight bright-pink dress, creates the prototype for a dumb blonde. She needs to be flamboyantly feminine, and speak softly and vapidly. As she says in the movie, ‘I can be smart when it’s important, but most men don’t like it.’ Monroe’s quick quips of feigned ignorance are supported by the groundedness of Dorothy Shaw, played by Jane Russell, in a rare-for-the-time female comedy duo. Helmed by Howard Hawks, a director famous for his ‘Hawksian’ tough-talking woman, the movie demonstrates comedy through the actress’s use of sexual agency. Monroe’s femininity is not an object but a tool to get what she wants — famously, diamonds. The sheer size of Monroe’s performance defined this fundamentally American archetype. Without her, there would be no Romy and Michele’s High School Reunion, Cher in Clueless, or Elle Woods of Legally Blonde.”