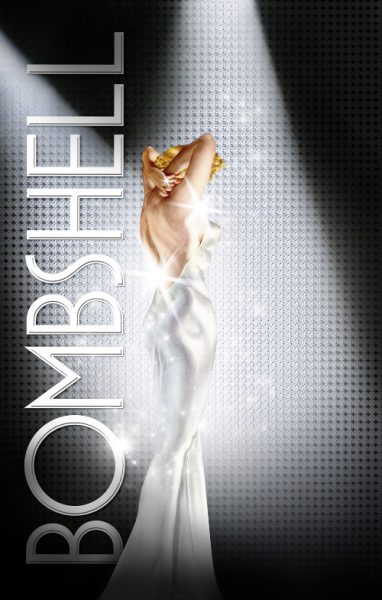 A much-heralded, one-off benefit performance of Bombshell (the Marilyn-inspired ‘show within a show’ from TV’s now-defunct Smash) was staged at New York’s Minskoff Theatre on June 8, reports Variety.

“The one-night-only event at the Broadway’s Minskoff Theater (home to The Lion King) was presented as a fundraiser benefitting the Actors Fund. Looking to defer costs of the event, the Actors Fund raised more than $300,000 on Kickstarter from Smash fans panting to make Bombshell happen — and the goal had only been $50,000. ‘This is the largest theater Kickstarter in history,’ noted Christian Borle, a cast member of the TV show (and one of the winners at the Tony Awards the previous night).

‘Maybe if NBC had used Kickstarter instead of sponsors, we’d still be on the air right now,’ cracked Debra Messing, Borle’s costar on the show.

Borle and Messing played the composer and book-writer/lyricist, respectively, of the fictional Marilyn Monroe bio-musical Bombshell. ‘You are about to hear the score for Bombshell that we wrote,’ she joked, referring to herself and Borle. ‘I’m still working on the book.’

Actually, the Hairspray duo Marc Shaiman and Scott Wittman penned the songs, and there never really was a book written for the show-within-the-show. So the concert strung together the pre-existing tunes with biographical texts written by Marilyn and her friends and lovers, like Lee Strasberg and Arthur Miller.

It was all there, from the signature song ‘Let Me Be Your Star’ to a ‘Big Finish’ encore, with Megan Hilty and Katharine McPhee trading off in the role of Marilyn. Jeremy Jordan brought down the house with ‘Cut, Print… Moving On,’ and the suggestive choreography in ‘The National Pastime’ got a lot more risqué than broadcast television would ever allow. Brian d’Arcy James, Leslie Odom Jr., Ann Harada and Wesley Taylor also showed up to sing a song or two…

The full-length evening, which included several of Josh Bergasse’s fully choreographed dance sequences, closed with Shaiman and Wittman arriving onstage to take the mic. ‘What you saw tonight was the best part of Smash for us,’ Wittman said. ‘It was being in the room with all of these incredible people.'”

In a review for The New Yorker, Michael Schulman argues that despite lacking ‘a book’, Bombshell was the true highlight of Smash:

“But what about that Marilyn Monroe musical? What we saw of it, chopped up and sprinkled across the two TV seasons, was always the strongest part of the series—actually, stronger than the series, as if some superior, nonexistent work of art were struggling to break free from a fatally flawed one…When Smash premiered—before its narrative dysfunctions became apparent—it was suggested that some day, once the show caught on, the fake musical could become a real one, a cross-medium spin-off like none the world had ever seen.

I should back up: the first delightful surprise of the evening was that Bombshell has an overture, which was played by a sumptuous onstage orchestra. Then it was on to the song that has been stuck in my head since the pilot, ‘Let Me Be Your Star,’ sung by Megan Hilty and Katharine McPhee. In Smash land, they were the duelling divas Ivy and Karen, who fought over the role of Marilyn Monroe like matinee ladies squabbling over an armrest.

Finally, we could hear Shaiman and Wittman’s Bombshell without the surrounding silliness of Smash. As on the show, Hilty and McPhee seemed to echo Monroe’s split personality, with Hilty as brassy, sexy Marilyn and McPhee as whispery, semi-catatonic Marilyn. Hilty was especially strong on ‘They Just Keep Moving the Line,’ a bluesy ‘Maybe This Time’-esque anthem, which could just as well become a cabaret standard. Shaiman and Wittman’s lyrical wit shone through in ‘Second Hand White Baby Grand,’ a ballad of neglect about Monroe’s childhood piano. (Fun fact: it now belongs to Mariah Carey.) And the wordplay of ‘The National Pastime‘ (‘a baseball diamond is a girl’s best friend’) made as good a case as any for Bombshell as a real, live musical. In between, there were cameos from Smash supporting players…

So why isn’t Bombshell a real show? After the event, Wittman pointed out the obvious: it doesn’t have a book…To make up for the lack of connective scenes, the actors read excerpts of Monroe in her own words, bringing us glimmers of her isolation and thwarted attempts to love and be loved. Over the course of the evening, Marilyn became a kind of metaphor for Smash itself—eager to please the wrong people, breakable under pressure, and, in the end, just too beautiful to live.”