The respected journalist and editor, Robert Stein, has died aged 90, reports the New York Times. As editor-in-chief of Redbook during the 1950s, Stein oversaw several profiles of MM, including ‘The Marilyn Monroe You’ve Never Seen‘, a 1955 cover story in which, shortly after Marilyn’s self-imposed exile from Hollywood, New York photographer Ed Feingersh chronicled a week in her life. 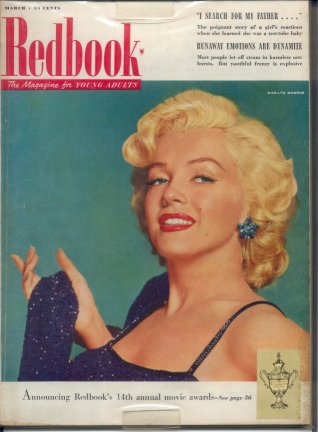 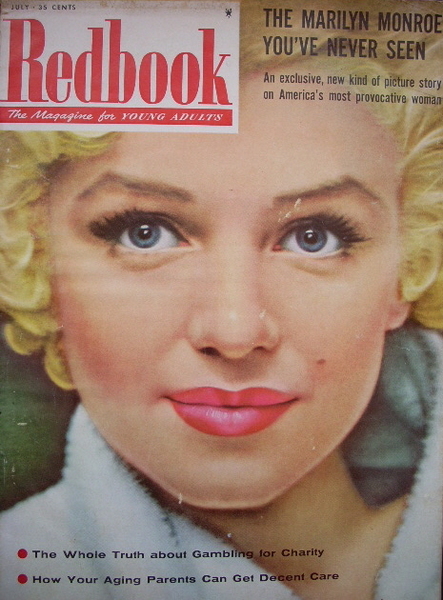 In my 2010 profile of Feingersh for Immortal Marilyn, I explained how the project took shape:

“In his introduction to the 1990 book, Marilyn 55, Bob LaBrasca stated that it was Milton Greene who arranged for a cover spread in Redbook. But Robert Stein, magazine editor at the time, has claimed that it was another of Marilyn’s photographers, Sam Shaw, who arranged the initial contact, and one of Shaw’s portraits of Marilyn graces the resulting July 1955 cover story, ‘The Marilyn Monroe You’ve Never Seen’.

However, neither Shaw nor Greene worked on the story directly. Over a hectic week, photojournalist Ed Feingersh followed Marilyn, along with Stein, and Marilyn’s small coterie of business associates. Whether shopping, dining, or dressing up, Marilyn’s daily life was captured on film.

In a 2005 article for American Heritage, ‘Do You Want to See Her?’, Stein recalled that ‘the two Marilyns kept fading in and out’: in other words, the star charisma she could switch on at will, and the nervous, sensitive woman that lay just behind that mask.

According to Stein, Feingersh was also a rather unpredictable character.   ‘He lived in the now, letting moments take him wherever they would… He must have had an apartment or room somewhere, but in all our years as close friends, I never saw it… His energy was unending… Life with him was never at a standstill.’”

Stein’s own thoughts on Feingersh and Marilyn, published in 2005, can be read in full on the American Heritage magazine’s website. 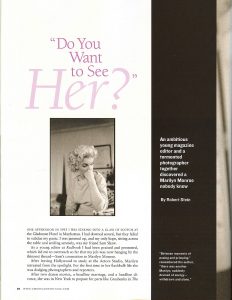 But as a tribute on The Moderate Voice website notes, Stein’s writings on Marilyn didn’t end there. Stein also kept a blog, posting a moving portrait of Joe DiMaggio in 2008:

“I met DiMaggio soon after their divorce the next year, when Marilyn came to New York and Joe, still in love with her as he would always be, confided how happy he was that she was getting away from ‘that Hollywood crowd.’

Five years after Marilyn’s death, the story I wanted as a magazine editor was Joe’s. He had arranged her funeral, kept it private and was still sending flowers to her grave three times a week but had not said a word about her.

He invited me to his New York suite at cocktail time and poured a drink. There were half a dozen men there, and it became clear he wanted me to sit at the edge of his circle, listening to locker—room banter, while he eyed me once in a while, freshened my drink and made up his mind about talking to me.

He was a matador surrounded by his entourage. Two men in business suits came in for a Polaroid picture. With DiMaggio’s arms draped over them, years fell from their middle-aged faces. They were boys in the embrace of their boyhood hero…

The evening ground on, the friends chattered, Joe said little. Finally I asked, ‘Could we talk?’ ‘Tomorrow morning,’ he said. ‘Come up about ten.’

When I arrived, he was packing his bags. I talked as he kept putting shirts, socks and underwear into a suitcase. He never looked up.

I told him I didn’t want to intrude, but it was my job to ask if he would ever say anything about Marilyn. If he did, he could trust me to make sure it came out right.

He was still staring into the suitcase, but I could see his eyes clouding. His jaw muscles tightened. For a long minute, he was silent.

‘I could never talk about her,’ he finally said in a choked voice. ‘Never.’