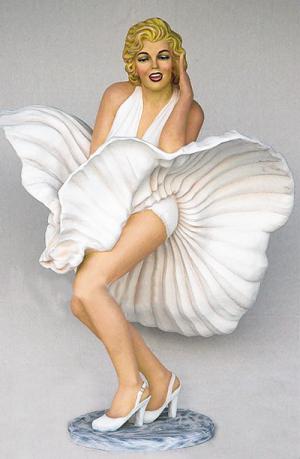 In my time on this blog, I have noticed that statues of Marilyn tend to get stolen. The latest, a 6ft likeness, was taken from outside the Light and Sound office in Devizes, Wiltshire.

‘Ian Matthews, owner of Devizes Light and Sound in Albion Place, off Sidmouth Street, said: “Apparently Jo Batchelor at Devizes Books heard a kerfuffle going on about 4am on Saturday, so we reckon that’s when it went.

“It must have taken a few of them to take it away. It weighs at least ten stone.

“The statue used to stand in the basement of the Corn Exchange where we hold the discos but when it was renovated a year or so ago I brought it back to the shop.

“I really miss her. It is a beautiful statue. I have no idea what its value is. I was going to do it up to sell it.”

The glass statue was one of a number bought by Mr Matthews to decorate his regular discos in the Corn Exchange.

It had pride of place at the Corn Exchange when the building was revamped in 2002.

But when the building was refurbished in 2009 to become the Merchant’s Suite, there was no place on the premises for Marilyn.

The statue had stood outside Mr Matthews’ shop ever since.

Inspector Ron Peach at Devizes police said: “It may have been stolen as a prank and may be gracing someone’s front room at the moment.

“But it is theft and anyone with information about the offence is asked to contact us as soon as possible.”

Anyone who can help pinpoint Marilyn’s whereabouts should contact Devizes police on 0845 408 7000.’

More details at This is Wiltshire

UPDATE: Marilyn’s statue has been rescued – on the roadside at Salisbury Plain, after being spotted from an army patrol vehicle. More at BBC News