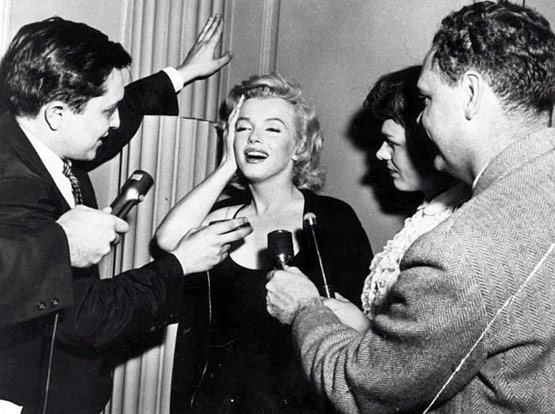 Gabriel ‘Gabe’ Pressman, a reporter for New York’s WNBC-TV for over 50 years, has died aged 93. Born and raised in the Bronx, he covered events ranging from the assassination of Malcolm X to 9/11. Among his many interviewees were Harry S. Truman, Elvis Presley, Fidel Castro and, of course, Marilyn. Gabe is at her left in the above photo, as she confirmed her engagement to Arthur Miller in 1956. In a recent Facebook post, he paid tribute to Marilyn.

“She was effervescent. She was beautiful and she transfixed the reporters who interviewed her one day in New York. I was one of them.

I remember the main topic of the conversation. It was her new boyfriend who later became her husband, playwright Arthur Miller.

Marilyn was in a good mood. She laughed and she made us laugh. I asked her: ‘What do you see in this guy?’ And she trilled in a dreamy, soft voice: ‘Have you seen him?’ She rolled out the seen word in a mischievous way.