Marilyn inspired many within the Pop Art movement, including Andy Warhol, Richard Hamilton and Pauline Boty. Now another British artist of this period has come to light, with a recent exhibition and a profile in The Guardian. Sue Dunkley produced at least two paintings based on images by photographers John Bryson and Bruce Davidson, and the private drama that unfolded between the Millers and the Montands during filming of Let’s Make Love. 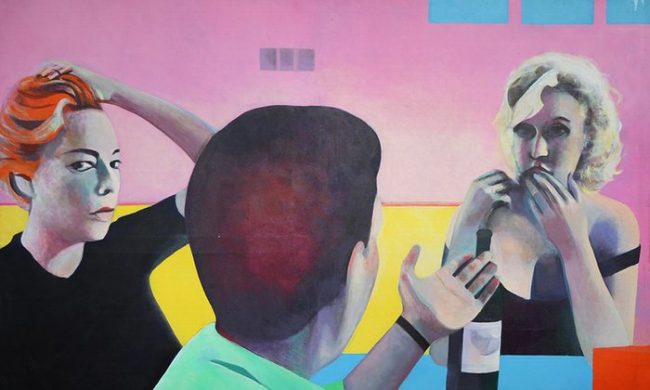 “This substantial series of Pop Art paintings on large canvas have recently been rediscovered in Dunkley’s London studio by her daughter and brother. The works in the series were produced between 1968 and 1972, and notably take as their subject the assassinations of John F. Kennedy and Robert Kennedy, the female body, and human relationships, often touched by violence and betrayal. A large number of pastel studies for these works and independent sketches have also been discovered, many of which explore intimacy, sexuality and the role of women in changing eras.

These works are often populated by numerous faces and figures, sometimes difficult to discern and placed in uneasy dialogue with one another. Dunkley herself often appears in the works, looking on or departing, merging the political and personal in both intimate and yet culturally significant works of art. These early works employ the bold and graphic language of Pop Art, referencing familiar media imagery and fashion photography. Recognisable images such as Ethel Kennedy’s screaming face and outstretched hand following Robert Kennedy’s assassination alongside images of Marilyn Monroe recur, as if ghosts on the edge of these significant events and moments in history. Dunkley returned to Monroe often, fascinated by her seemingly irreconcilable sexuality and vulnerability, the impossible expectations placed on her to be both child and sex symbol.”