Following two major exhibitions in Bendigo and Albury, it can be said that 2016 (so far) has been Australia’s Year of Marilyn. Journalist Inga Walton has also made a significant contribution with ‘A Moment With Marilyn’, her detailed and insightful four-part series for Trouble magazine, which you can read here.

“There is something of the universal fable in Monroe’s story, in the way tales are re-cast, with a different setting, for a new generation. There is also an unmistakable touch of the heroic about her, given where she came from and where she went. ‘We take her seriously as an artist and person, a liberated woman before it became fashionable, who won an honoured place and lost her life,’ Norman Rosten attests. ‘A woman of obscure beginnings who studied and struggled against great odds to create a life of dignity and respect. She confronted a world of caste and prejudice; she broke into the clear for herself and others.’

There are myriad reasons for Monroe’s inextricable hold over generations of audiences. Her unique and intoxicating combination of beauty, talent, sensuality, impulsiveness, and emotional turmoil continues to beguile and haunt. Monroe’s life was plagued by frailty, isolation, and self-doubt. She suffered from the thwarted ambition and unfulfilled promise that afflicts so many of us- and yet she demonstrated great resilience. We have come to empathise with Monroe’s faults, feel compassion for the many challenging aspects of her life, and applaud her candour. Sometimes it seems as though the desperate pathos of her tragic demise might threaten to overwhelm the pleasure her work continues to bring. It is as though Monroe anticipated this paradox when she mused,

Life- I am both of your directions,
Somehow remaining hanging downward,
The most, but strong as a cobweb in the wind-
I exist more with the cold glistening frost.
But my beaded rays have the colours I’ve seen in paintings
Ah life, they have cheated you…”

“The paintings in this show, put together by an American exhibitions agency, are a strange mixture of minor works by well-known artists, and major pieces by lesser-known practitioners from Europe and America. There is, for instance, a suite of sketches by Richard Lindner, along with prints by Eduardo Paolozzi, Arnulf Rainer, Robert Indiana and Mimmo Rotella. These are the artists I’d call ‘well-known’, but none of them has one iota of Warhol’s public profile. MAMA has also added a couple of paintings by Australia’s most prolific Pop artist, Richard Larter.

The best part of the show – in terms of both quality and quantity – are the photographs, taken by figures such as Cecil Beaton, Henri Cartier-Bresson, Ernst Haas, Eve Arnold, Alfred Eisenstadt and Bert Stern (although not, alas, Richard Avedon, who produced one of the greatest portraits). It’s a study in contrasts, with Beaton’s work being as ornate as a Baroque sculpture, while Cartier-Bresson captures Monroe in an introspective mood on the set of The Misfits.”

The show also includes a program of supplementary events, including a series of public lectures, a screening of Some Like it Hot, and day trips to Bendigo Art Gallery, where another Marilyn exhibit opens in March.

Most intriguing of all, a fully accredited elective subject — Exhibiting Culture: Marilyn — will be available to La Trobe University undergraduate students and to members of the general public, ABC Central Victoria reports.

“Taught by Dr Sue Gillett, the subject will explore the wider context of the era in which Marilyn Monroe was created.

Dr Gillett said she was interested in women’s roles in cinema and especially exploring the historical context Monroe fits in.

Despite the strong role models in cinema during the forties, with the likes of Katherine Hepburn and Lauren Bacall, Dr Gillett said Monroe came into her stardom in the post-war fifties when there was a push to get women back into the homes after their active role in the war years.

Musical comedy became the genre Monroe was typecast in, and excelled at, even though her aspirations were to become a serious actress.

It was this ‘bind’ that Monroe was in that Dr Gillett said she was interested in exploring.

‘It’s almost like she performed her way into a trap,’ she said.

Her life story was then refashioned by the studio publicists into the American Dream, according to Dr Gillett, which became effective in establishing her as an icon.

Contracted to Fox Studios at a time when actors were controlled by their studios, Monroe struggled to gain some independence and have control over her choice of movies.

Although she had some input into crafting her own image she was working within a system that was very much a men’s club, according to Dr Gillett.

‘She was both a victim but she wasn’t without power.'”

Marilyn: Celebrating an American Icon – the touring exhibit focusing on the imagery that made MM go global – is due to open at MAMA Albury in Australia on February 12, with a late addition of rare photos depicting a young Marilyn, taken by Art Meyers in Chicago during the Love Happy promotional tour of 1949, and provided by a local businessman, Colin Glassborow, reports the Sydney Morning Herald. 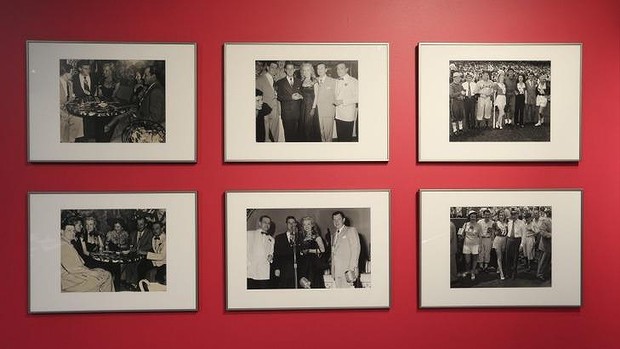 “Mr Glassborow, 71, says he was bequeathed 12 photographs of the star by his American friend Art Meyers, a freelance photographer who was hired to follow Monroe around Chicago’s Wrigley Stadium in 1949.

Mr Glassborow, who owns Albury Building Supplies, said he met Meyers when he visited the Playboy building in Chicago in 1974. They became friends after Meyers offered to show him and his brother around Chicago, and over the years holidayed together. Meyers also visited him in Albury in 1995.

‘There are 12 altogether,’ Mr Glassborow said of the black and white photos, prints of which he started selling online via his website marilynmonroe-photos.com to help Meyers financially before the photographer died, at the age of 90, in 2010. He loaned eight images to the museum, six of which will go on display from Friday.

‘He was a freelance photographer at the time and he happened to be there … they were having a pro celebrity match with old legends and Hollywood celebrities,’ Mr Glassborow said of the Wrigley Stadium event Meyers photographed.

‘He was asked if he would take photographs at the old Ricketts’ nightclub … Al Capone used to visit there apparently.’

‘She was there with Roddy McDowall,’ he said of Monroe. ‘She’d only been in bit parts in three small movies, but the next year she got more with it and in a couple of years she was a household name, she quickly took off.’

‘A lot of people are in awe of the photograph,’ he says of the image of Monroe with McDowall, which he has had colourised and blown up, and displays in a gold frame in his secretary’s office.”

Marilyn’s Australian year kicks off next week as the touring exhibit, Marilyn: Celebrating an American Icon opens at the Murray Art Museum (MAMA) in Albury, New South Wales. The exhibition will feature 150 artworks and supporting programs, reports the Border Mail.

Meanwhile the arrival of Seward Johnson’s giant sculpture, ‘Forever Marilyn’, in Bendigo Park, Victoria (around 90 miles from Melbourne) heralds another upcoming exhibition, Twentieth Century Fox Presents Marilyn, opening at Bendigo Art Gallery on March 5. You can watch a video of the installation here. 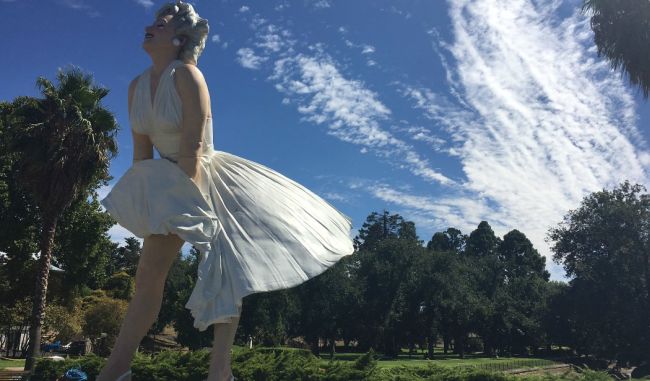 Glynis Traill-Nash reports on both exhibits in an article for The Australian.

“The two exhibitions deal with Monroe in different ways: for Bendigo, it is about getting closer to the woman herself, and includes screen costumes, photographs, her own wardrobe items and personal effects, such as make-up and notebooks; MAMA instead opens Monroe to the gaze and interpretation of others, including images of the star created both during her lifetime and after her death, from the likes of photographers Cecil Beaton and Henri Cartier-Bresson, and artists including Andy Warhol and Richard Lindner.

The Bendigo exhibition also includes two particularly notable personal looks. ‘We have the little green Pucci blouse, which was quite understated, and was the last thing that Marilyn was photographed publicly in, so it’s quite poignant,’ says Curtin. There is also a photo of the star in a red cotton housecoat, with a pattern of chickens and roosters. ‘It’s quite ordinary, housewifey,’ says Curtin. ‘It was worn when she was about two months’ pregnant (to third husband Arthur Miller). You can see in the photo she looks quite proud, but sadly she lost the baby. But that human side of Marilyn gives us some insight that we don’t usually get to see.'”

A ‘Festival of Marilyn’ would be held to complement the MAMA exhibition, including screenings of her movies, period furniture and memorabilia sourced from public and private collections in Australia.