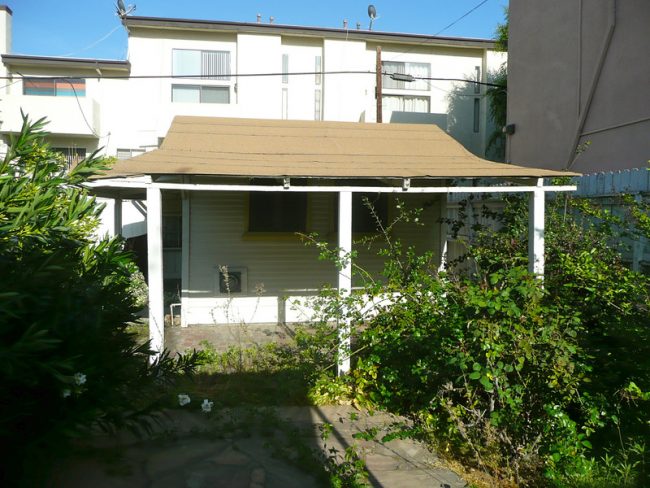 Marilyn’s former home at Hermitage Street (now Avenue), North Hollywood (or Valley Village), has been demolished by property developers while awaiting a decision on landmark status, reports the L.A. Daily News. Marilyn lived there from 1944-45 with her husband Jim’s family, while he served in the Merchant Marine. During this period, the teenage Norma Jeane took a job alongside her mother-in-law, Ethel Dougherty, at the Radioplane munitions plant, where she was ‘discovered’ by army photographer David Conover.

“A backyard home where Marilyn Monroe lived when she was first discovered as a bombshell pin-up was slated this week to be considered for landmark status.

But three days before the hearing, a developer bulldozed the Valley Village home.

‘I can’t even breathe. My neighbors and I are in mourning,’ said Jennifer Getz, of Valley Village, who had nominated the so-called Dougherty House for designation as a city Historic-Cultural Monument. ‘It’s one of the biggest losses in the San Fernando Valley.

A case for preserving a plain pair of single-story houses — the front one built during World War II, the rear thought to have been an early-century gabled farm house where Monroe then lived — was to have been heard Thursday by the Cultural Heritage Commission.

But then neighbors discovered a heavy backhoe Monday ripping down both houses at 5258 Hermitage Ave. The owner, Joe Salem of Hermitage Enterprises LLC, could not be reached for comment. City officials said he’d sought a demolition permit last year to build condos.

It was there that 17-year-old housewife Norma Jean Dougherty moved in with her in-laws in April 1944 while her sailor husband James was far away at sea.

She moved out of the North Hollywood area house in the summer of 1945, would soon divorce Dougherty and went on to become the iconic Marilyn Monroe.

While at her wartime job inspecting parachutes, Dougherty was picked to model for morale-boosting military magazines by a photographer sent by U.S. Army Capt. Ronald Reagan. Her career took off, and she became an actress.

City officials said the house wasn’t significant enough to be named an official landmark. Not only did the house not have any distinguishing characteristics, according to city planners, but the actress didn’t become a movie star until long after she moved.

Critics of the demolition blame Councilman Paul Krekorian, whose office would not support the landmark request or step in to help save the house.

They also accuse the developer of tearing down the house just after the landmark hearing was posted, and before the commission could put the brakes on demolition, a common practice across the city. They also accuse him of violating a law requiring a 30-day public notice to demolish buildings older than 45 years.

‘It was never posted,’ said Los Angeles historian Charles J. Fisher, who penned the Dougherty House nomination. ‘The problem is that the city failed to adhere to the law. We’ve lost a portion of Marilyn Monroe’s life, a very significant portion.'”