Christine Edson is an American-born costume designer based in Liverpool. She has recreated many of Marilyn’s most famous gowns, worn by lookalike Suzie Kennedy among others. 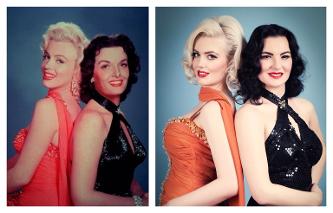 As a new showroom for ‘Christine Collections‘ opens on Victoria Street, Christine speaks to the Liverpool Echo:

“Christine, born and raised in the USA but now based in Liverpool, became an expert in Marilyn fashion when she was principal designer for an off-Broadway show devoted to the tragic star.

‘I did the costumes for that show and, although it was only small and it didn’t run for long, they got a huge amount of press attention,’ she explains. ‘I had girls from all over the world contacting me to do Marilyn Monroe costumes and I became the go-to designer for anyone who wanted to look like her.

‘Then in 1999, Christie’s were having a big auction of Marilyn’s personal property in new York and I was asked to be a stylist for the displays.

‘I got to actually handle her dresses which was a real privilege, it was just heaven,’ laughs Christine. ‘I didn’t want to go home at night! The designer who did most of them was a guy called William Travilla, he did the famous white one from The Seven Year Itch amongst others, and he was like a god to me.’

Christine spent numerous hours, not just styling the dresses for sale at the multi-million dollar auction, but examining them inside and out.

‘The construction inside these dresses was just a wow,’ she smiles. ‘She had that lovely curve at the back and designers sculpted the dresses onto her to accentuate her hourglass shape. The work inside them was just amazing, with all the boning and detail, and it was just inspiring.'”