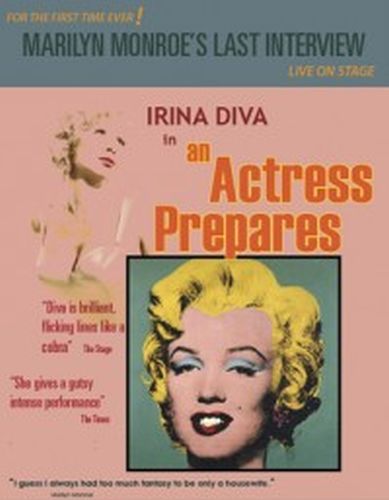 Bulgarian actress Irina Diva has spoken about her one-woman show, An Actress Prepares, based on Marilyn Monroe’s last interview with Richard Meryman in July 1962:

‘Irina quickly tells me not to go along expecting an impersonation; the play is an introspective performance that uses Marilyn’s own words. Although most audiences expect to see the blonde wig a lot earlier in the show, Irina laughs, ‘‘People always say, ‘we expected more Marilyn’, and I say ‘it is all Marilyn!'”

An Actress Prepares is now playing at the New End Theatre in Hampstead, London, until July 10. It was recently reviewed in The Stage:

“Diva has hit upon the fascinating concept of stripping away all the cliches of the Monroe brand – so the blonde bombshell’s words are spoken by a brunette Bulgarian, purposely making no attempt to cover her accent.

This allows us to focus on the oft poignant words rather than the trappings of yet another Boo-boo-bee-doo impersonator and reminds us that Norma Jean never used to have platinum hair either.

That said, Diva’s performance is so eccentric that a breathy rendition of Happy Birthday wouldn’t be so amiss to anchor this in some kind of normality.”

And another review, from a previous performance at the Dublin International Gay Theatre Festival:

“Irina Diva is a first class actress. She speaks slowly and clearly with much colour and emotive range in her voice. She is fit, attractive and intelligent in her performance. The setting of the play in the dressing room of the star, ably assisted by her silent dresser accentuates the intimacy of her analysis of female sexuality and her relationship with men who desire her. The dresser (Award Winning Graham Elwell) is gay and sees and touches intimately the body of this goddess, which must have been the ultimate desire of most men of her generation.

Diva has emotion, an intimate understanding of the text, strong stage presence and a noticeable accent. Here and it is only here that I part company with the production. Monroe had constructed phrases and caressed words that would make men shudder, it was softly spoken, sensual and full of implication. Diva’s accent is loud, strong, emotive and does not in anyway reflect the linguistic impact of Monroe’s sultry tone.”