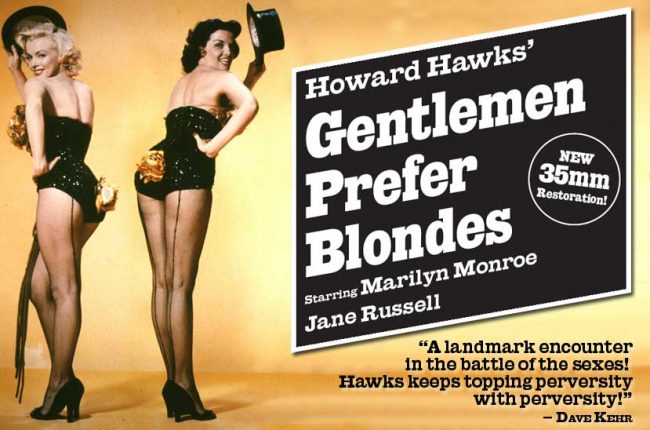 “Just months after Gentlemen Prefer Blondes opened, Monroe graced the first cover of Playboy, connecting one boom-time America to another, the Ziegfeld Girl to the Bunny.

In Hawks’s Gentlemen, the flat-chested flappers illustrating Loos’s book are swept aside by not-so-little Monroe and Russell, striding out with ‘Just two little girls from Little Rock,’ their opening bump-and-wiggle …

Russell is supposedly romanced by oval-faced zero-charisma snoop Elliott Reid, but there’s more warmth in her fondly bemused looks at Monroe, whose friendship is a front-row ticket to the best show in town. The girls, untouched by competition, present a united front, even transferring identities—Russell does a dye-job masquerade as Lorelei—until they practically exchange vows with each other in the most ironic wedding in Hollywood history.”

Read my review of the new, improved print