The team behind the Snickers Superbowl ad – featuring Marilyn and Willem Dafoe – have sprung a new trick on unsuspecting New Yorkers, as Tim Nudd reports for Adweek.

In another look behind the scenes of the Snickers Superbowl ad, Shoot Online reveals how the music was orchestrated.

“Storefront Music’s recent Big Game spot featuring an ‘ageless’ Marilyn Monroe portrayed by actor Willem Dafoe for Snickers highlights the kind of authentic approach to music that lies at the heart of everything the music house composes and records.

According to Storefront co-founder Adam Elk, his team of composers crafted a handful of pieces inspired by film scores of the 1950’s. ‘We hired great string and horn players, recording them through period-appropriate microphones and pre-amps,’ says Elk. ‘We wanted to produce a score that sounded like it was recorded at Capitol Records in 1955.'”

Snickers has posted a new video about their Superbowl ad, ‘The Making of Marilyn’, on Youtube. 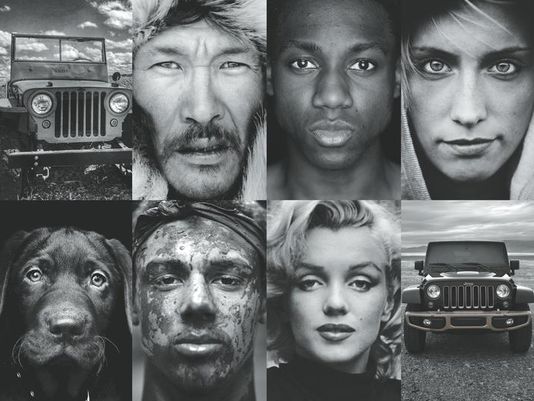 And in other news, Chrysler’s ‘Portraits’ ad – featuring an image of Marilyn, promoting their Jeep brand – has been awarded the Super Clio Prize, reports Mirror Daily.

Following the Snickers ad featuring Marilyn and Willem Dafoe, last night’s Superbowl included two further references to MM. The first was a coda to the Snickers ad, with Eugene Levy playing the ‘fan guy’, reports Adweek. (And if you’re wondering how Marilyn made it into the original clip, Bustle has some suggestions.)

“‘You wouldn’t have Hollywood history without the fan guy,’ Levy said in a statement. ‘It was an honor to portray one of Tinsel Town’s forgotten heroes. Marilyn Monroe might’ve been looking down at him, but every guy in America was looking up to that stage hand.'”

Meanwhile, Alfred Eisenstadt’s 1953 portrait of Marilyn – representing beauty – appeared in another Superbowl commercial for Fiat Chrysler’s Jeep brand, AdAge reports. This is not a first – footage of Marilyn was used in Bob Dylan’s Chrysler ad for the Superbowl back in 2014.

“‘Portraits,” which aired during the halftime show, looks backwards, weaving in references to Jeep’s 1941 roots as a military vehicle created for Allied soldiers in World War II. The spot uses 60 images from around the world, including photos of famous people who have links to Jeep … Ms. Monroe — who also starred posthumously in a Snickers Super Bowl ad this year — is connected to Jeep via a honeymoon trip she took to Korea with Joe DiMaggio in the wake of the Korean War.” 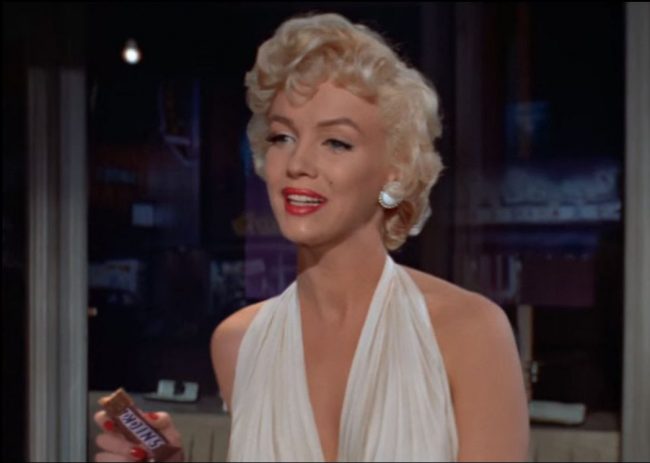 After last week’s ‘Happy Birthday Mr President’ teaser, comes the real thing: Marilyn recreates the ‘subway scene’ from The Seven Year Itch, with a little help from Snickers (and Willem Dafoe.) The commercial was made for this weekend’s Superbowl, reports Adweek, and you can watch it now on Youtube.

“‘I have to admit playing a Hollywood bombshell is a new challenge for me,’ Dafoe said in a statement. ‘But as a huge fan of Marilyn Monroe, I just couldn’t resist the opportunity to take a walk in her shoes and famous white dress.’

Snickers brand director Allison Miazga-Bedrick added: ‘It doesn’t get much bigger—or better—than combining one of the most legendary moments in movie history from the iconic Marilyn Monroe with some modern day icons of our own.'”

Marilyn’s iconic performance of ‘Happy Birthday Mr President’ – at the 1962 Madison Square Garden gala honouring John F. Kennedy – has been parodied in a new Snickers ad marking the Superbowl’s upcoming 50th anniversary, reports Adweek. A grouchy ‘Marilyn’ is played here by actor Willem Dafoe. Incidentally, it’s not the first time MM has been referenced at the Superbowl. Back in 2014, footage of Marilyn was used in a Chrysler ad featuring Bob Dylan.

“She’s America’s original sweetheart. But when she’s hungry, Marilyn Monroe takes a turn for the worse. That’s according to Snickers’ new Super Bowl ad teaser, in which she reprises her iconic ‘Happy Birthday’ serenade—to celebrate the Super Bowl’s 50th birthday—but with quite the husky vocal.

‘Since we’re kicking-off the 50th celebration of one of the world’s most iconic events, it seemed only fitting to cast Marilyn Monroe, a Hollywood icon with global appeal, to help us celebrate’, says Snickers brand director Allison Miazga-Bedrick. ‘But this is just a small glimpse of what America should expect from Snickers on Super Bowl Sunday. As always, the ad will feature a funny surprise that we’re confident will satisfy fans hungry for a laugh.’

Snickers confirmed the Super Bowl spot continues the brand’s ‘You’re Not You When You’re Hungry’ positioning, which launched with the Betty White spot on the 2010 Super Bowl. The 30-second spot, from BBDO New York, will air in the first quarter of the Feb. 7 telecast.”