Marilyn’s affair with her Let’s Make Love co-star Yves Montand (captured here by photographer John Bryson) makes the cover of a Paris Match special issue about celebrity romances – you can order it here.

And by the way, Fraser Penney has shared this very similar cover from another Paris Match special, released in 1990. Although Marilyn’s dalliance with Yves came at a low point in her life, he remains an iconic figure in France. Incidentally, he also had a less-publicised affair with another married star, Shirley MacLaine, on the set of My Geisha (1962.)

In his 2018 memoir, Bond, the Beatles and My Year With Marilyn, veteran movie publicist Charles ‘Jerry’ Juroe devotes an entire chapter, ‘Life With Marilyn’, to his memories The Prince and the Showgirl, filmed in England in 1956. He had previously worked with Sir Laurence Olivier in Hollywood, and was also acquainted with Marilyn’s press agent, Arthur P. Jacobs, and photographer Milton Greene, co-founder of Marilyn Monroe Productions. In the first of three posts, Juroe describes how after an exceptionally promising start, the shoot quickly became a nightmare for everyone involved.

Marilyn’s arrival in Britain and her first press conference at London’s Savoy Hotel caused a sensation – “not because of my organisational handling,” Juroe writes, “but because of her wit, charm and intelligence … It was the last time that I found myself to be in complete favour with Monroe.”

“When one was on the set and watched Marilyn do a scene, you saw movement and dialogue, but nothing that caused goosebumps. But! – in the screening room, when seeing the rushes, it was something else. By some mysterious process of osmosis, between the live action, the camera’s lens, the film, the processing, and then the projection onto a screen, something somewhere in all that – magic happened! What you saw on the set was not what you observed in the screening room. I will never know the answer because I’m not sure there is one. This charisma was what audiences all over the world paid for and saw from their cinema seats. This was what, for those years as Queen of the Hill, set her very much apart and kept her at the pinnacle of the Hollywood Heap.”

Albert ‘Cubby’ Broccoli, an American producer living in London, invited Marilyn and friends to watch his film starring Alan Ladd (possibly 1953’s The Red Beret) at a screening room on Audley Square. Several years later, he and Juroe would begin their association on the James Bond movie series. Broccoli remembered Marilyn from the late 1940s when she was dating Hollywood agent Johnny Hyde. “I am sure Hyde’s death was certainly one of many contributory factors to her fragility,” Juroe writes.

“Before too long, life on the film became unbearable. I found I could not recommend or offer any suggestion or give an opinion because her mindset became such that whatever I suggested was inevitably never in her best interest. One cannot work under such a condition for long, so survival became the name of the game. In fact, I was privately offered $5000 (no small amount then) by someone at the famous French magazine Paris Match if I got her to Paris for a weekend. I never considered this because even though it would have in fact been a great opportunity, it would also have been a fiasco. To get her there in the first place, plus the demands on her time, it would never have worked!” 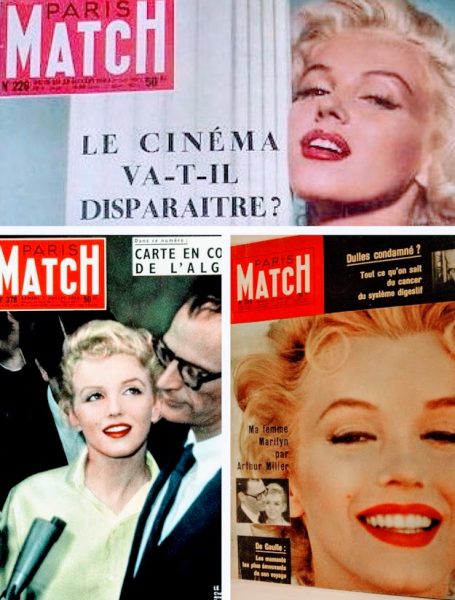 In addition to their recent 1962 special, Paris Match has begun a new anthology series, ‘Les Deciennes‘, with a look back at ‘Our 1950s‘. Marilyn isn’t on the cover this time, but there’s a six-page article about her inside. The 1950s issue costs €7.95, or you can pre-order all seven volumes for a special price of €49.

Thanks to Divine Marilyn 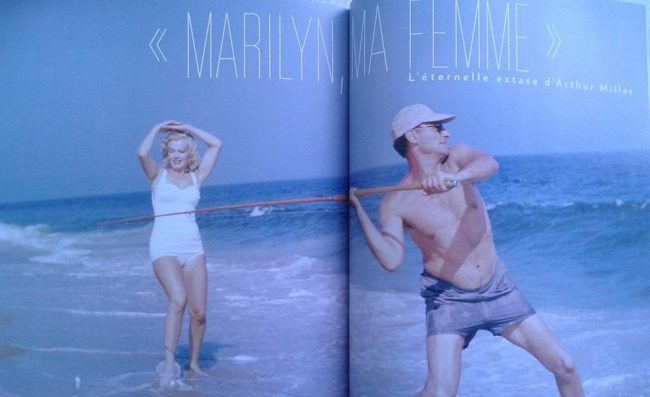 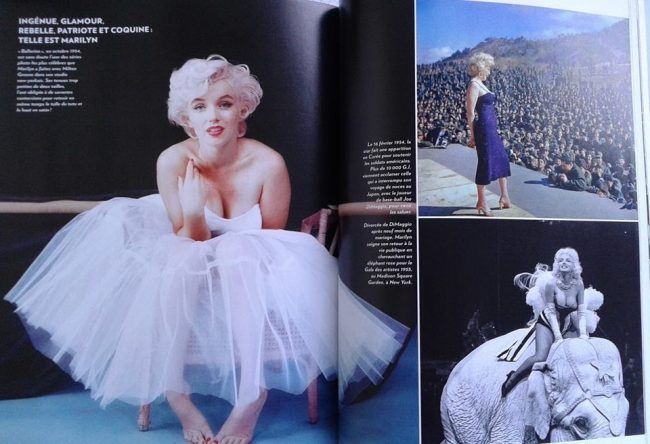 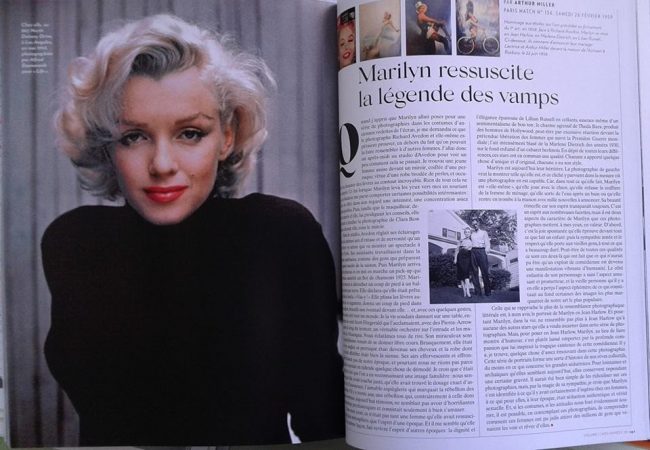 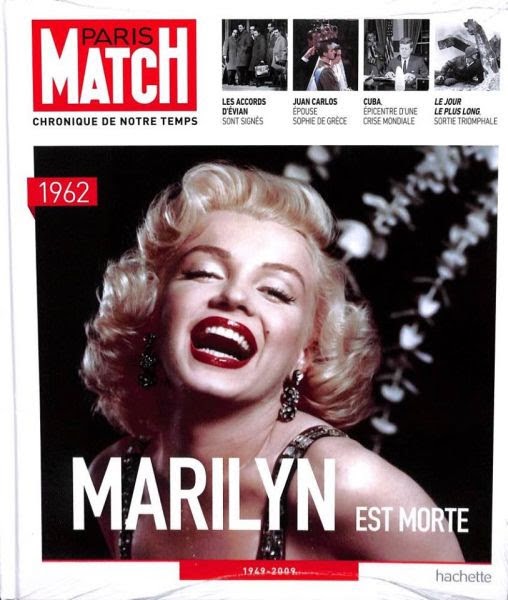 Marilyn’s tragic death was one of the biggest news stories of 1962. As part of a series, ‘Chronique de Notre Temps’ (‘Chronicle of Our Times’), Paris Match has published a magazine special on that fateful year, with Marilyn gracing the cover. You can order a copy for $11.99 here. 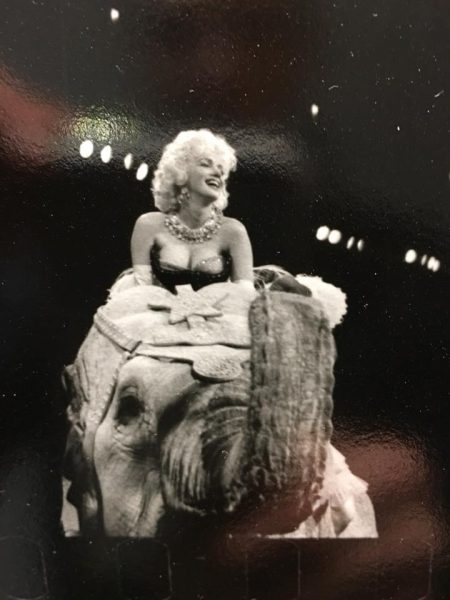 Photos of Marilyn riding a pink elephant at the circus, taken at an arthritis charity benefit in New York by Walter Carone for Paris Match in 1955, are featured in a new exhibit dedicated to the magazine’s great photographers, at the Argentic Gallery on Rue Daubenton, Paris, until tomorrow, November 19.

Willy Rizzo, who photographed Marilyn in 1962, has died aged 84. Born in Naples, he moved to Paris during the 1930s, and became interested in photography.

Rizzo’s photos of the North African war caught the eye of Life magazine. He later worked for France Dimanche, and covered the first Cannes Film Festival.

Rizzo worked for the Black Star agency in New York, and in 1948, he began a 20-year tenure at Paris Match. He photographed historic events like the Nuremberg Trials, and stars including Brigitte Bardot, Vivien Leigh and Audrey Hepburn.

In his 2010 book, The Final Years of Marilyn Monroe, author Keith Badman gives a detailed account of how her photo shoot with Rizzo came about.

It was originally arranged with Paris Match in December 1961. Marilyn had been out of the public eye since The Misfits, so this was considered quite a coup. He planned the shoot with Marilyn’s publicist, Pat Newcomb, who suggested an afternoon session.

On February 8, 1962, Newcomb informed Rizzo that Marilyn was unwell, and promised that she would appear the next day.  And indeed, Marilyn did so – however, exhausted after moving house, she apologised with a kiss.

She arrived on Saturday, February 10th. ‘Marilyn was immensely sad at the meeting,’ he said later, ‘and that sadness was very visible in the pictures.’

‘These photos showed a very different side to Marilyn,’ wrote biographer Michelle Morgan (in MM: Private and Undisclosed), ‘in that her hair is rumpled, her clothes are plain and she looks thin and exhausted. Still, she loved them and on March 9th Pat Newcomb wrote to Rizzo to express that Marilyn thought the photos were sensational and she looked forward to working with him again.’ 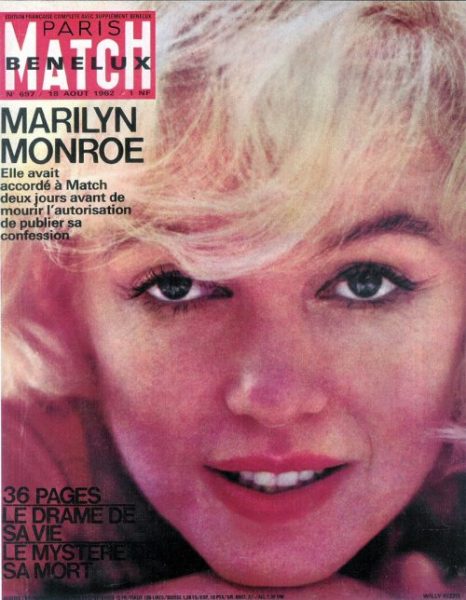 The photos were first published in Paris Match on June 23rd. In recent years, outtakes from the shoot have emerged, showing a softer, more flattering view of Marilyn than the original shots had indicated.

During the 1960s, Rizzo launched a successful second career in furniture design, and was much favoured by the international jet set. In 2010, he opened a gallery in Paris with the help of his wife, Italian actress Elsa Martinelli, and their son.

Willy Rizzo died in Paris on Monday, February 25th. His funeral was attended by, among others, actor Jack Nicholson.

A small selection of photos of Marilyn by Paul Slade and Nick de Morgoli, from the archives of Paris Match, are currently on display at the Opéra Gallery on the Rue Saint-Honoré.

“Paul Slade (1924–1979) was born in Brooklyn and spent twenty-five years at the New York bureau. He was the perfect New York reporter, marking his territory and making way for no one. His real passion was boxing, and he took several beautiful photographs of Cassius Clay.

Nick de Morgoli (1916–2004) came to America in 1948 and started working as a circus photographer. In 1951, he moved into the recently opened Paris Match New York bureau on 2nd avenue. He photographed Edith Piaf, Marlene Dietrich and Marilyn Monroe.

These five limited-edition photos, numbered 1 to 10 and printed on 150 x 100 cm silver paper from the original negatives, are being sold for 10,000€ per print.” 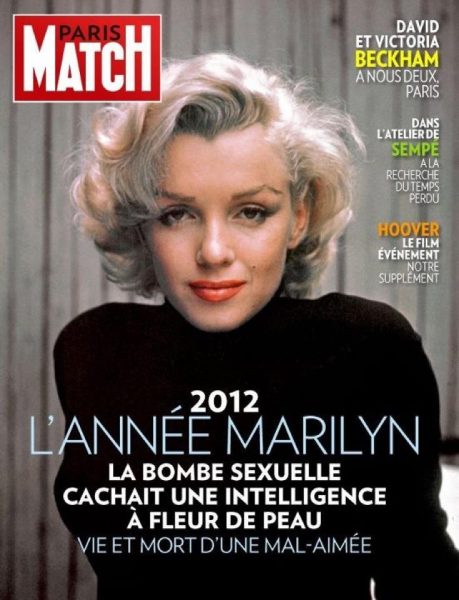 This week, Paris Match predicts that 2012 will be Marilyn’s year. A typically gossipy cover story can be read in part on the magazine’s website, and extra photos by Eve Arnold can be viewed via the magazine’s iPad app.