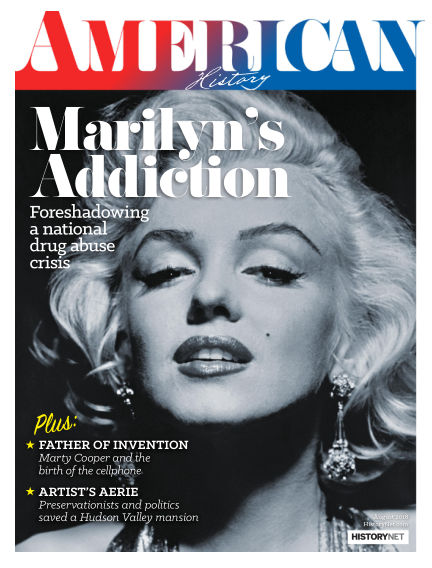 Marilyn is on the cover of American History‘s latest issue (dated August 2018), with an article inside by Robert Dorfman, Emily Berquist Soule, and Sukumar Desai MD, about her struggle with addiction to prescribed drugs and ultimate death by overdose prefigured the national opioid crisis, which has now reached epidemic proportions. Although the subject matter is bleak, the piece is well-researched and insightful. You can also read it in full here.

“Then, as now, abuse of drugs was nationwide. But if prescription drug abuse had an epicenter in the 1950s, it was in Los Angeles at Schwab’s Pharmacy on Sunset Boulevard, where Orson Welles shopped, Ava Gardner worked the soda fountain, and F. Scott Fitzgerald reportedly had a heart attack buying cigarettes. At the pharmacy counter, celebrities and regular folks could get their prescriptions filled. In 1950s Hollywood, that meant barbiturates for nerves and amphetamines for energy and weight loss. One studio employee claimed that in those days most Hollywood actors were on prescription drugs.

In that era, when psychological treatment was the province of the very privileged or the very ill, pharmaceuticals seemed to hold great promise for treating mental illness. More patients got relief without undergoing lobotomy, previously the recommended treatment. But the medical community knew prescription pharmaceuticals were addictive. Studies in the 1950s showed the best treatment for such addictions to be hospital detox followed by inpatient psychological care. Those convicted under federal drug laws could be forced to undergo such treatment, but Marilyn’s drug use never became a criminal matter. Her treatments were strictly voluntary.

It is impossible to know whether Marilyn Monroe took her own life or was self-medicating and miscalculated. Many friends insisted she died by accident. But in her final interview, Marilyn called celebrity ‘only a temporary and partial happiness,’ adding in an aside on her career that ‘it might be kind of a relief to be finished.’ Days later, she was.”