Artist Nikki Douthwaite has been featured in several UK newspapers this week. She creates likenesses of iconic celebrities from hole punch dots.

Marilyn was a commissioned piece of work. I really enjoyed doing another one in coloured dots to make a black and white image, as I had with Senna. This one allowed me to improve the technique, and get the blending of tone better than I had done in my first attempt. I was far more confident, including brighter colours, sure that they would still give a black and white ‘look’ at the end. I wanted to keep this piece when it was completed but unfortunately a deposit had already been paid. It was the first piece that I have made where I didn’t think I could do any better.”

Singer-songwriter Lana Del Rey is seen here reading a vintage copy of Arthur Miller’s The Misfits (ie the novella on which the screenplay is based), in a photo shoot for this month’s Australian Vogue. 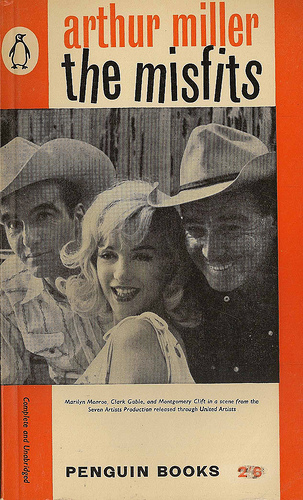 “I am forever writing here about Marilyn. And people often ask me when and if I met her and was I a good friend? I have already written that we were not friends and never actually met. My vast information about Marilyn springs from my long friendship with her great (and last) press agent Pat Newcomb, from the late PR insiders Lois Smith, and John Springer and from speaking privately with Frank Sinatra, Dean and Jeannie Martin, Pat Lawford , Tita Cahn, Tony Curtis, etc. Marilyn knew a lot of people and I knew those people. And they were all obsessed by her. Lois Smith once told me: ‘I never felt that way about another star ever I worked with. She made you want to protect her from anything hurtful.’ Sinatra would have married her, if Joe DiMaggio hadn’t been around.

But I have often recounted barely recovering, as a fan, back in early 1961, from seeing her smothered in a black sable wrap, very glamorous, very beautiful, very blond, attending the New York premiere of The Misfits in NYC. She was with Montgomery Clift. (The Arthur Miller marriage had already collapsed.) They sat down in front of my aisle and I observed them throughout the film, cuddling, giggling and being very happy in the manner of real pals. So here’s a photo that very night. And I had never seen it before. Perhaps it is one of the few nights in the lives of these two talented stars when they were truly happy. (At least in each other’s company.) Marilyn famously disliked the film and her character, which was based so much on her. Both of them were to die only too young, but they were even then, already legends.”

Liz Garbus’s Love, Marilyn gets a lukewarm review from Linda Holmes, reporting for NPR from the Toronto International Film Festival.

“The actresses, including Glenn Close, Viola Davis, Marisa Tomei, Jennifer Ehle, Uma Thurman, Lindsay Lohan, Evan Rachel Wood, and Elizabeth Banks, have vastly different interpretations of Marilyn…They’re performances that seem to have little to do with each other, and as interesting a conceit as it is, it doesn’t really work to have them all essentially playing different versions of the same person…

Moreover, there are some execution issues that take away from the project’s potential strengths. The actresses are all green-screened in front of various backgrounds, sometimes generic ones but often projections of whatever document they’re reading…Unfortunately, most of the film has the flaw that green-screen can sometimes create, which is a cheap-looking cutout quality with little fuzzy halos around everyone’s head and hair. It’s more conspicuous at some moments than others, but it’s distracting throughout.

There’s also a fundamental challenge to reading what are not necessarily meant to be earth-shattering documents — some are essentially scribblings of the ‘note to self’ variety — with great thespian seriousness. All of these women clearly want to do justice to the idea of Marilyn Monroe, who is so much bigger than life at this point that it seems like perhaps it calls for a bigger than life performance. But there’s a danger of trying to bring import to words that may not have ever been intended to have it, particularly. There is at one point a dramatic reading of a recipe. How much visible acting does that call for?

I wanted to like this project more than I did; it’s such an interesting idea and such a fine lineup of actresses. As someone who sees a lot of documentaries, I appreciate the effort to create new forms and new ways to bring historical figures to life. But in the end, it just doesn’t quite work.”

‘Remembering Marilyn’, a display of about 30 photos by Ed Feingersh, will open on Sunday, September 9th, at 5pm at the Drkrm Gallery in Los Angeles (pronounced ‘darkroom’.) Admission is free and the exhibition will run through to October 14.

Actor Joseph Gordon-Levitt first found fame as a teenage alien in the 1990s sitcom, Third Rock From the Sun. More recently, he has starred in 500 Days of Summer, Inception, and The Dark Knight Rises.

Later this year he will play Abraham Lincoln’s son alongside Daniel Day-Lewis in Steven Spielberg’s ambitious bio-pic, Lincoln. According to Film News, Levitt has praised MM in the UK’s Company magazine:

“Marilyn Monroe doesn’t get enough credit as an actress because if she’d been only good-looking without the talent, she couldn’t have driven men crazy the same way …”

The Misfits will be screened at noon in the Chatham Public Library in Springfield, Illinois, next Wednesday, September 12, reports the State Journal-Register.

Liz Garbus’s documentary, Love, Marilyn, will receive its UK premiere in London’s Leicester Square on October 14 (with another screening a day later), as part of the BFI London Film Festival. Tickets can be booked from September 24.

Love, Marilyn was reviewed by Scott Feinberg of the Hollywood Reporter yesterday, and he thinks it might be worthy of an Oscar nomination.

“One never knows what the Academy’s documentary branch will nominate for the best documentary under its bizarre system. But, as someone who is a passionate student of film history and knows a fair bit about Monroe, having interviewed many people who worked with her — among them Jane Russell (Gentlemen Prefer Blondes), Eli Wallach (The Misfits), Don Murray (Bus Stop), Nehemiah Persoff (Some Like It Hot), and Celeste Holm (All About Eve) — you can take my word for it: Love, Marilyn made me appreciate the tragedy of her death more than anything else I’ve ever come across, and it deserves to be seen and recognized.”

Eric Kohn has reviewed Love, Marilyn – Liz Garbus’s upcoming documentary based on Monroe’s personal writing, as collected in the 2010 book, Fragments – for IndieWire. (It was screened this weekend at the Telluride Film Festival in Colorado.)

“In its opening minutes, the documentary Love, Marilyn establishes a gimmick that seems destined to fail: Chronicling the rise and fall of Marilyn Monroe, director Liz Garbus unleashes a collection of movie stars who mainly read excerpts from her personal diaries throughout the film. Watching these contemporary faces dramatize Monroe’s attitude initially creates a grating disconnect from the subject matter. Over time, however, the approach blends into an immersive account of the actress’ career that both deconstructs her celebrity while interrogating its impact on her troubled existence.

Not content to let the actors carry the whole movie, Garbus also includes interviews with Monroe acquaintances and scholars as well as rare archival footage.

Attempts to explore Monroe’s off-screen persona in narrative form, including last year’s My Week With Marilyn and Nicolas Roeg’s Insignificance, tend to embellish on the actress’ personality by nature of their interpretative format. Love, Marilyn achieves greater clarity by letting the actress lead the way. As her struggle congeals, the collection of performances gain a strong justification: For over a decade, the actress battled to reconcile her public image with her true self. Sifting through the many faces that play her in Love, Marilyn, so must we.

HOW WILL IT PLAY? Destined for distribution with a company that can play up its potential on VOD, “Love, Marilyn” is also likely to find warm reception at numerous film festivals. Its next stop is in Toronto.”

The Milton H. Greene Archives have retained their rights to license photos of Marilyn independently of her estate after a lengthy court battle, Reuters reports.

“Milton H. Greene Archives Inc. has been in a long-running court battle with Anna Strasberg, widow of Monroe’s acting coach, Lee Strasberg, and her licensing agent CMG Worldwide, which have controlled use of Monroe’s image for years.

In a ruling on Thursday, the 9th U.S. Circuit Court of Appeals in California backed a lower court decision that allowed Greene Archives to license its images of Monroe.

The legal battle over Greene’s images hinged on where Monroe was living at the time of her death on August 5, 1962. The court ruled Monroe resided in New York and therefore she did not have the posthumous right of publicity based on the state’s law.

‘Because no such right exists under New York law, Monroe LLC did not inherit it … and cannot enforce it against Milton Greene or others similarly situated,’ Judge Kim McLane Wardlaw wrote for the court.

Wardlaw wrote that the lengthy dispute over Monroe’s persona ‘has ended in exactly the way that Monroe herself predicted more that 50 years ago,’ pointing to Monroe’s quote: ‘I knew I belonged to the public and to the world, not because I was talented or even beautiful, but because I had never belonged to anything or anyone else.'”